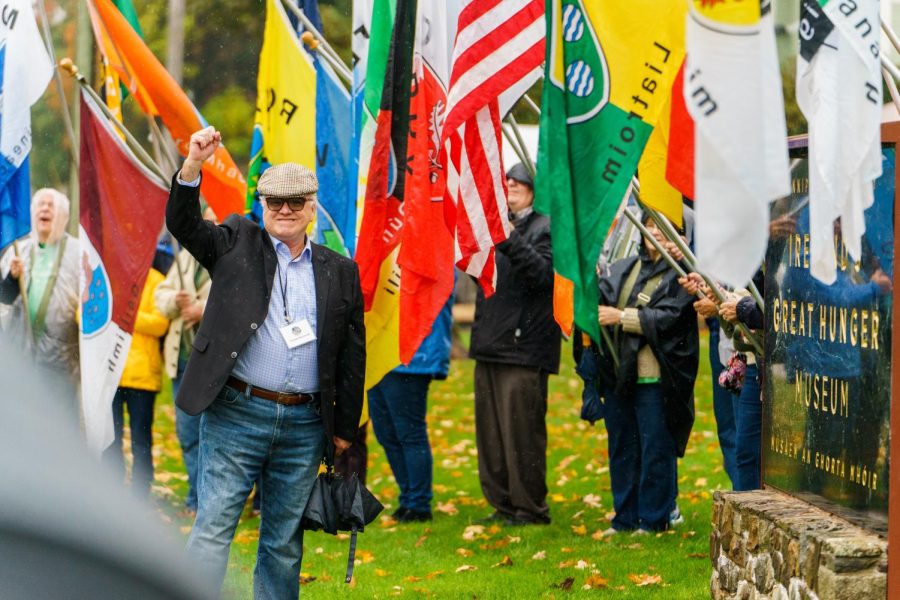 Turlough McConnell and his team organized the rally to echo why Quinnipiac should revisit its decision to close the museum.

With umbrellas in hands, over 100 people gathered on the streets of Hamden on a rainy Saturday sharing one goal — saving Ireland’s Great Hunger Museum.

“My heart is in the building, my blood is in the art,” said Frank McCarthy, former public safety officer who worked at the museum. “… I love the art, and I love what it represents. This isn’t fair.”

The rally on Oct. 30, came after Quinnipiac University’s announcement of the museum’s closure that resulted in a community outcry. Over 100 people, some from the Committee to Save Ireland’s Great Hunger Museum, stood in front of the museum waving Irish flags, performing Irish music and dances, portraying street art, offering food and additional informational activities.

Hamden police patrolled the event. After rally-goers took photos in front of the museum’s entrance, officers instructed the group to stay off the property at Quinnipiac’s request.

Turlough McConnell, the museum’s former advisor, organized the protest. He said he wanted to make Quinnipiac aware that the closure was “one of the biggest public relations disasters” it has made.

“We’re very concerned that it shut down without any connection to the community,” McConnell said. “The community has come out today to say we wanted to be in that discussion.”

McConnell told The Chronicle that this rally was not an anti-Quinnipiac movement but rather was to voice reasons why the university should reconsider the decision.

“We’ve got bad university policy right here,” McConnell said. “We want to say ‘correct it, think about it, change your mind, be part of something positive.’”

Associate Vice President for Public Relations John Morgan said the university is not releasing any statement in response to the protest.

The university shut down the museum because it generated 25% of its operational fund. President Judy Olian established a financial self-efficiency goal for the museum in 2019, and she said the goal was not accomplished over the past three years.

Lynn Bushnell, Quinnipiac’s former vice president of public affairs who argued against such financial goals, attended the rally. She thought the museum was too young to be financially sustainable as it opened in 2012.

“I think that it is, can and should be a huge resource for students,” Bushnell said. “… I just think there are so many ways it could have been developed, and I don’t think the effort was made to have that happen.”

Olivia Flynn, a sophomore nursing major who attended the rally, said she only learned of the museum this year after being enrolled in an Irish studies course at Quinnipiac. After realizing the grasp the museum had on the community, she said “it’s a shame that it’s shut down.”

“I would have definitely made a visit, even a class visit,” Flynn said. “I’m hoping it gets reopened.”

Community members, including former Quinnipiac President John Lahey, said they are disappointed with the effort put forward to utilize the museum within the university’s community and the surrounding town of Hamden.

“The thing is that (President Olian’s) priorities are different from Dr. Lahey’s,” McCarthy said. “I don’t understand the board of directors and the board of trustees that the university has. I believe (it’s as if) none of them have come through the museum before the decision was made to shut it down.”

Connecticut Attorney General William Tong is looking into the closure, and Morgan told The Chronicle the university has been cooperative with the office.

“I can confirm we have an open and ongoing inquiry into this matter, but cannot comment beyond that,” said Elizabeth Benton, Tong’s spokesperson.

Sen. Richard Blumenthal, one of the event’s guest speakers who also served as Connecticut’s attorney general from 1991-2011, urged the university to reconsider the decision in efforts for Irish Americans and all of the people of Connecticut.

“This is a moral reckoning, it is a moral imperative,” Blumenthal said. “Put aside the legal inquiry that is ongoing. There is a moral obligation here to the people who worked hard for this museum, who contributed to it, who sacrificed to make it possible.”

Blumenthal said that the museum is not just a part of Irish history, but instead a living part of American history. During his speech, he said “ a great American university doesn’t walk away from a museum about Irish history.”

“Why would we walk away from educating people about discrimination and bigotry,” Blumenthal said. “It isn’t right.”

Whether or not this protest affects Quinnipiac’s reconsideration, the museum-saving committee is waiting for what Tong’s investigation could reveal.

“We feel at best Quinnipiac was sloppy in how it dealt with this,” McConnell said. “At worst, it could be criminal … that they have taken works for a non-profit institute and museum and turned them into (its) own property without regard of those who gave them and for the purpose that they were given.”

Until then, Ireland’s Great Hunger Museum’s supporters mourn the loss of the museum and wait to see if their public objection to the closure will impact the decision.