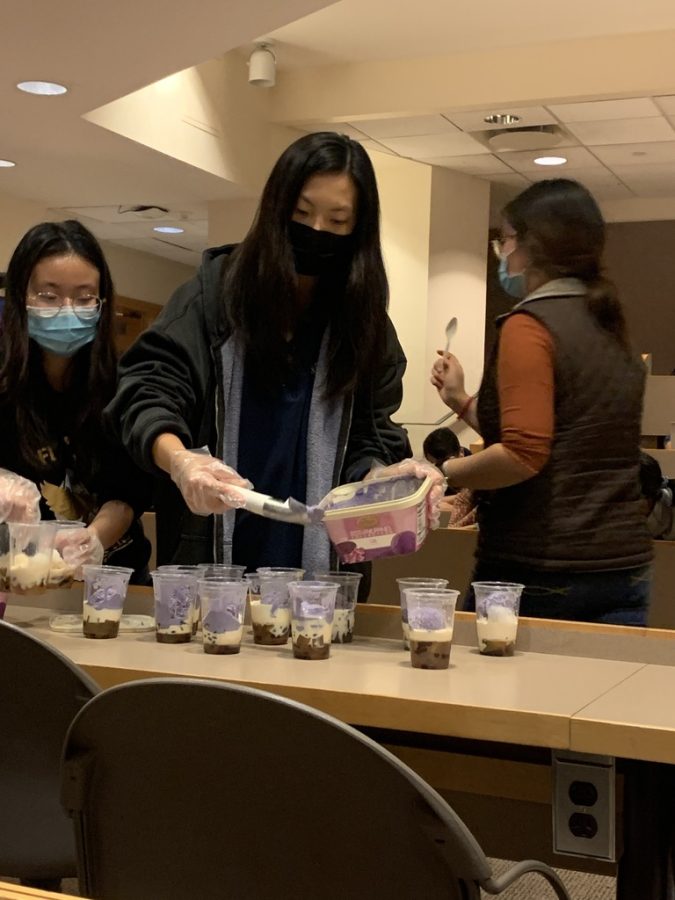 The Filipino dessert of halo-halo was the star of the show at the Asian Student Alliance’s (ASA) Halo-Haloween event on Oct. 27.

“It was a great experience,” said Genesis Iscoa, a junior political science major who attended the event. “I got to learn a bit about halo-halo, about the culture behind it.”

Halo-halo, or “mix-mix” in the Austronesian language of Tagalog, is made in many different ways depending on the region of the Philippines. It can even include flan and coconut strips.

The Japanese introduced these shaved ice treats to the Philippines during World War II. Japan has its own take on the dessert called “Kakigōri.” However you mix it, halo-halo is a decadent testament to Filipino history.

October is National Filipino American History Month, a time to celebrate the culture and contributions of the Filipino- American community. Filipinos are the third-largest group of Asians in the U.S., totaling over four million people. While students enjoyed their halo-halo, the ASA displayed a presentation about the honorary month.

The Philippines is a Southeast Asian island nation in the western Pacific Ocean. Formerly a Spanish colony, the U.S. annexed the Philippines after the Spanish-American war. The nation gained independence from America in 1946. Filipinos have a long history in America, inhabiting the country since 1587, when they traveled to California with Spanish colonizers.

As event coordinator of the ASA, Jinxia Lin, a sophomore biology major, put the night together.

“It’s our first Filipino event, so that’s really big for us, because obviously Asian Student Alliance is all about spreading awareness of different Asian cultures,” Lin said. The coordinators said that Southeast Asian issues are often silenced in conversations about Asian awareness. The club hopes to change this and teach people that the term “Asian” doesn’t only apply to East Asia. It encompasses many people and countries on the continent.

“We’re trying to increase our diversity and inclusivity by having our first Southeast Asian event,” said Ashley Hong, the vice president of ASA and junior occupational therapy major.

The coordinators also spoke about a big component in any culture: local foods and cuisines. They described Filipino cuisine as “East meets West,” drawing on many influences such as Spanish and those of the different ethnic

groups of the Philippines.
When it comes to the dessert itself, halo-halo is unlike

any American ice cream sundae. Personally, I loved the taste and hope to get the opportunity to enjoy it again.

Iscoa, who is an international student from Honduras, said that her culture has similar culinary components.

“(Halo-halo) has evaporated milk, ube which is yam fruit, which we also eat in my culture,” Iscoa said. “So it’s kind of an alternative to what we usually get here.”

Iscoa said she really enjoyed the dessert, and it was “nice to learn about the importance behind different cultures.”

“We hope that (students) got the experience to try halo- halo for the first time and be more educated about the history and general experiences of Asian Americans,” Hong said.

Aside from being educational, the event was also a lot of fun — complete with raffles and great prizes for three lucky winners. “I hope (students) learned a little bit more about Filipino culture, and I hope they enjoyed the food,” Lin said.

Lin said she is excited for ASA to have more in-person events now that student organizations are returning to normal.

“I hope that they get a sense of normalcy from being at home for the past almost two years,” Lin said.

The club has a ramen night and a poetry reading planned this semester as well as a Lunar New Year celebration in the spring. Hong said she hopes these events bring “bonding” and “awareness” of diverse Asian cultures.