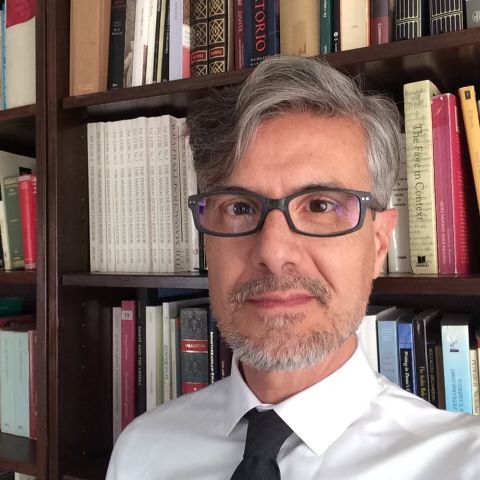 A professor of modern languages, Filippo Naitana has brought Italy to Quinnipiac University with his debut collection of poetry, “Viceversa.”

The volume, published Oct. 3, bridges the gap between two cultures by alternating between Italian and English poems with Italian translations.

“‘Viceversa’ took shape between Italy, where I grew up, and the United States, where I have lived for more than twenty years,” Naitana wrote in the author’s note.

The style Naitana uses is called exophony, meaning it was written in a language that is not one’s mother tongue.

“The decision to include the original English is intended both to document the writing process as it developed, and to offer a perhaps less usual view of living and writing between two worlds,” Naitana said.

In “Viceversa,” Naitana shares his “physical, linguistic, anthropological (and) spiritual” journey with readers.

“The poems included in the volume were written between the U.S. and Italy over several years — mostly between 2018 and 2021— but build on a much wider life canvas,” Naitana said. “One where time and space can be blurred.”

This transit is most apparent in the context of language in Naitana’s poem, “Keeping a Low Profile.” It opens with, “It’s ten o’clock on my first night in America. Words flying at immoderate speed, unsupervised, hard to catch.”

Similar to the challenges immigrants face, the subject of the poem explains the struggles with being thrown into a new language. Naitana refers to his “deck of flashcards,” imagery familiar to anyone who has studied a foreign language.

The poem concludes with a moment of victory over language. When the subject uses the idiom “I am trying to keep a low profile,” he surprises himself with the American- ness of his speech and is “marinating in pride.” For Naitana, this pride is autobiographical.

“‘Keeping a Low Profile’ is based on an exchange that actually happened my first night in New Haven, when I came to the U.S. for graduate school,” Naitana said. “It is about the mixture of displacement and exhilaration of someone who is first attempting to negotiate a new language and culture, as much as it is infused with nostalgia for that sense of discovery.”

Poems like “Snow” are especially local. In the poem, Naitana relates New Haven to his hometown of Oristano, Sardinia, Italy. In New Haven, Naitana observes snowfall as well as gentrification. In Oristano, he recalls rare snowflakes and snowball fights. Naitana is “at once on both sides of the Atlantic.”

“In ‘Snow,’ two very different kind of flakes end up falling on the page: those very familiar to us who live in Connecticut and the ‘fiocchi’ (flakes in Italian) I experienced as a miracle of sorts as a schoolboy in the coastal town where I grew up in Sardegna (the island of Sardinia) and where I’ve never seen snow since,” Naitana said.

Naitana’s poems cross historical and cultural boundaries to express universal ideas of family, change and memory. Even as a non-Italian speaker, one can find themselves relating to Naitana’s themes.

“B-side” compares the strange to the familiar like two sides of a record, reminding us that change is temporary and love persists despite it.

Naitana explores an alternate universe in which “Madam President is on Charlie Rose,” “Caesar died in Egypt of old age” and “poetry will kill the internet in a showdown.”

However, he reminds us to not regret what we don’t have.

“On the other side, history still looks familiar, and you are still you,” Naitana writes. Poet Ann Lauinger writes in a preface to the book that Naitana’s writing in Italian and English is a “cross-cultural conversation with himself.”

“(The book) raises, far from theoretically, questions about what it means to command (or be commanded by?) more than one language,” Lauinger wrote. “Can only one of those languages be the writer’s ‘original’ tongue?”

In “Viceversa,” it is inconsequential which language is “original” and which is second. Instead, the languages are intertwined.

“In some ways, ‘Viceversa’ — as the title and cover are meant to convey — is about living across cultures, which sometimes involves looking at the U.S. through Italian eyes, and others at Italy with American ones, without ever knowing in what language that first sparkle of a poem will take shape,” Naitana said.

And sparkle, they do. Naitana pauses English poems in the middle and switches to Italian then brings it back seamlessly to English. Distinctly American figures like Rose exist in the same stanza as Italian movie director Sergio Leone. We travel between North Haven and the island of Sardinia without needing to take a plane. Naitana shows that, though we are all multifaceted, we are more alike than we may think.