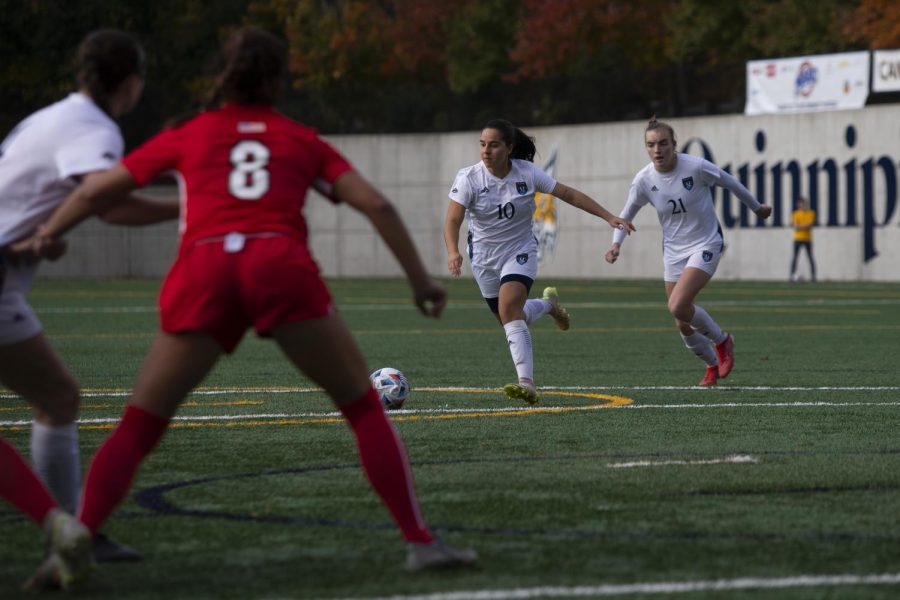 Senior midfielder Selena Salas (left) had an assist during Sunday's win, propelling the Bobcats, a major reason the Bobcats can succeed when sophomore forward Rebecca Cooke (right) isn't involved in goals. Photo from

Quinnipiac women’s soccer tends to attract a rowdy audience. It’s natural to the sport, and Sunday’s MAAC tournament quarterfinals 1-0 win over Marist was no different. The Bobcats will now host the semifinals in Hamden, their third year in a row playing the penultimate tournament game.

And hey, how about the fan in the tiger onesie showing his support? Much like a real tiger, he remained camouflaged among his surroundings. But when senior forward Gretchen Kron scored the game-winning goal, he let out his roar and you knew he was there.

The student section was so prominent that you probably didn’t even see President Judy Olian in the background.

Olian was one of the last spectators on her feet clapping after Kron’s header in the 67th minute, assisted off a free kick by senior midfielder Selena Salas. The connection between the two seniors was a culmination of set piece upon set piece, corner kick after corner kick in which the Bobcats came up empty.

Throughout 90 minutes, the Bobcats piled up 12 corner kicks, but very few turned into meaningful opportunities. It was no secret before this game that the Bobcats are all about speed on the outside, save for sophomore forward Rebecca Cooke who has had a sensational season. Frankly. she has earned the right to try new things offensively.

Granted, the Red Foxes’ defense loaded the middle of the box to defend against the cross-heavy Quinnipiac offensive scheme so Cooke frequently came up empty attacking the central lane. But, let’s remember who we’re talking about here.

Cooke, who found the back of the net 12 times in 16 games this season, was one goal shy of the conference lead. That type of prolific scoring gave her the freedom to break free from being a pure forward, as her presence in the midfield during Sunday’s game was incredibly freeing for the Quinnipiac wingers.

Senior midfielder Lauren Wendland might as well have set up camp on the right-side wing of the field. Even playing against the 4-3-3 formation that Marist used, with the special attention dedicated toward protecting the middle of the field, it seemed as if Wendland whipped in a cross every four minutes.

Pairing Wendland, who is 5 feet, 11 inches, with sophomore forward Courtney Chochol, who is the same height, is typically a recipe that strikes fear in smaller defenses. Count Marist as one of those, as none of the five defenders who received minutes against the Bobcats are taller than 5 feet, 7 inches.

“We knew they were going to play a back-six,” Clarke said, talking about Marist’s formation in which it was showing four defenders and two wingers, who were tasked with rolling back and contributing on defense. “You know when you’re playing a team like that, you’re going to get a lot of free kicks, or at least corners, so we probably should have scored one or two more, but I’ll settle for 1-0.”

But try as they might, the Bobcats just weren’t connecting on the crosses into the box, which happens. Soccer is a game in which one bounce can make or break a game, and all it takes is one good cross and one solid header to move on to the next round. Factor in the tournament atmosphere and emotion into this game, and that becomes even more true.

That’s what makes the Bobcats a scary team to go up against moving forward in the MAAC postseason. Even when the wing attack isn’t connecting, the central attack can eat teams up.

Though Cooke had a quiet day on the stat sheet (six shots, two shots on goal), she was a headache for the defense. She was determined to penetrate the 18-yard box and went on a handful of strong runs through traffic to facilitate a threat.The target is officially on her back.

Cooke’s tactical approach on the ball is outstanding to watch, and there aren’t many ways to watch this game without coming to the conclusion that her surgical dribbling is one of the Bobcats’ best weapons. But she had an effect on the Marist defense that very few players can control.

With other players on the squad, such as Salas and junior midfielder Markela Bejleri, the Red Foxes were content to give them a decent cushion of space. This doesn’t mean that these players don’t deserve attention; Salas comfortably paced the MAAC in assists with 13 this season. But that shows the type of player Salas is. She doesn’t try to dribble through you, she wants to dissect you with her field vision and let her teammates finish the job.

But Cooke weaved in and out of Marist defenders with ease. With players like Cooke who has the ability to cut quickly with the ball at her feet, the defense’s mission is to close them down and take away that option. Marist threw bodies at Cooke nonstop, which worked. But again, the Bobcats have enough different ways to beat other teams. Between Cooke’s on-ball brilliance, Wendland’s crossing ability and Chochol’s height advantage in the box, they’re one of the hardest teams in the conference to defend.

Garnering all this talent is a significant achievement. Of course, though the job is far from done, on-paper talent is an important part of having a good team. But, as Clarke (and probably every other coach in the nation) has addressed, the ring-clad team at the end of the tournament is usually the healthiest one.

Clarke praised his team for remaining healthy throughout this season. Despite playing as recently as the spring season because of COVID-19 delays, the 27 Bobcats on the roster have remained physically available all year long. This is exceptionally rare, perhaps even more rare than seeing a grown man in a tiger costume at a college soccer game.

It takes serious effort from both the training staff and the players to accomplish this, even though the long season might have caught up to a few players on Sunday. Senior forward Emily Loney was affected in the most visible way, as she pulled up limping and grabbing her leg making a run at a through ball in the 87th minute.

“It’s about being healthy, obviously, we’ve got three, four days to recover, we’ve got to ignore what’s going on tonight around campus,” Clarke said, referencing the fact that Sunday happened to be Halloween. “They’ve got to do all the little things they’ve been doing all year, and come into the next game with all 27 players available … Yes, we got a few bruises today, but it’s more playing the game, so if we get 27 ready on Thursday we’ll have a good group.”

The Bobcats’ Thursday matchup is against No. 3 Siena. Quinnipiac’s only matchup this year against the Saints was a 1-0 loss Oct. 16, but this is the playoffs. Nothing is the same when the postseason gets underway, and the women’s soccer team knows it.

“I think this game was a reminder that we can’t stop pushing,” Salas said. “We’ve got to keep finding our game and playing our game. We have to keep looking for that want to get those crosses and score those goals. It’s not going to be easy, but we want to win the MAAC championship, and we have to keep showing that we are the best team.”