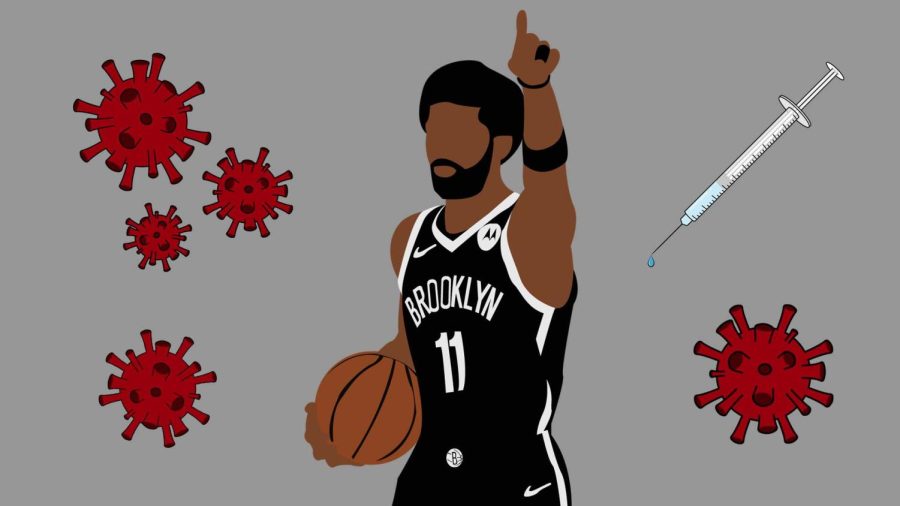 I’ll never forget the disappointment and anger in Mark Phillips’ voice as he impersonated LeBron James yelling at former teammate Kyrie Irving for a 2017 skit on the RDCworld1 YouTube channel.

That same tone is what many NBA fans felt when reports surfaced that Irving, current point guard for the Brooklyn Nets, would not receive the COVID-19 vaccine.

Irving has been criticized relentlessly for his decision to remain unvaccinated. Popular radio host Howard Stern said, “In terms of idiots, he’s gotta be the top idiot in the country right now.” NBA Commissioner Adam Silver voiced his opinion saying, “I’d tell him to get vaccinated, for himself, and his family, and his teammates, and for the league.”

A quote from Atticus Finch in the book “To Kill A Mockingbird” resonated with me when I was thinking about this situation.

“The one thing that doesn’t abide by majority rule is a person’s conscience.”

Every single human being on Earth has their own set of beliefs that make sense to them and help them navigate their lives. My beliefs are different from yours, and yours are different from mine. That’s part of what makes the world beautiful, we all have a platform to express our diverse beliefs.

“Everybody has a personal choice with their lives … Everyone is entitled to do what is best for themselves,” Irving said on an Instagram Live on Oct. 13.

Irving remains unvaccinated not to be a hero or a contrarian, he believes it’s what’s best for himself.

He received consequences for not receiving the first vaccine, too. Instead of allowing Irving to be a part-time player available for road games in cities not requiring vaccination, the Nets have banned him from all team events — which includes practices and games — until he is fully vaccinated.

Irving is well aware of the consequences for his actions, he knows he’ll lose money and the opportunity to win a championship with this star-studded Nets team.

Along with this, Irving’s public reception is tainted for many. He’s been called an idiot and selfish.

But again, “The one thing that doesn’t abide by majority rule is a person’s conscience.”

Whether you are vaccinated or not, you have to do what’s right for yourself.

I am vaccinated. My decision helps protect my family, friends and enables me to have a full college experience which I couldn’t have if I was unvaccinated.

Those that choose to remain unvaccinated are not all lunatics who purposefully detract from the efforts to stop the pandemic. Some are just hesitant. The Kaiser Family Foundation (KFF) releases monthly surveys where participants talk about their feelings towards the COVID-19 vaccine.

The June 2021 survey the KFF released stated that the top reasons people stay unvaccinated is that they are worried about the side effects, the vaccine is too new and some don’t think they need it for protection.

While the vaccine being new is not pertinent in October 2021, being worried about side effects and believing you don’t need it are still relevant today. Regardless of your vaccination status, you should have your reasoning for doing so, don’t blindly follow someone else’s decision.

“If you’re staying safe, you follow COVID protocols, you wear a mask and you’re unvaccinated or vaccinated, that’s on you,” Irving said. “You should stand on that.”

Some may argue that Irving not receiving the vaccine spreads misinformation and causes harm to his young fans and the public perception of the NBA. This is true when the information is in the wrong hands, but the league has made its position on vaccination clear.

Though Irving has promoted false conspiracy theories in the past (ahem, flat Earth, ahem), his current stance on vaccination is not rooted in misinformation, it’s rooted in morality.

Irving’s stance on vaccination isn’t about proving liberals wrong, or purposefully going against the status quo, it’s about doing what’s right for him.

Regardless if you are a basketball superstar or an average Joe, “The one thing that doesn’t abide by majority rule is a person’s conscience,” no matter the issue.