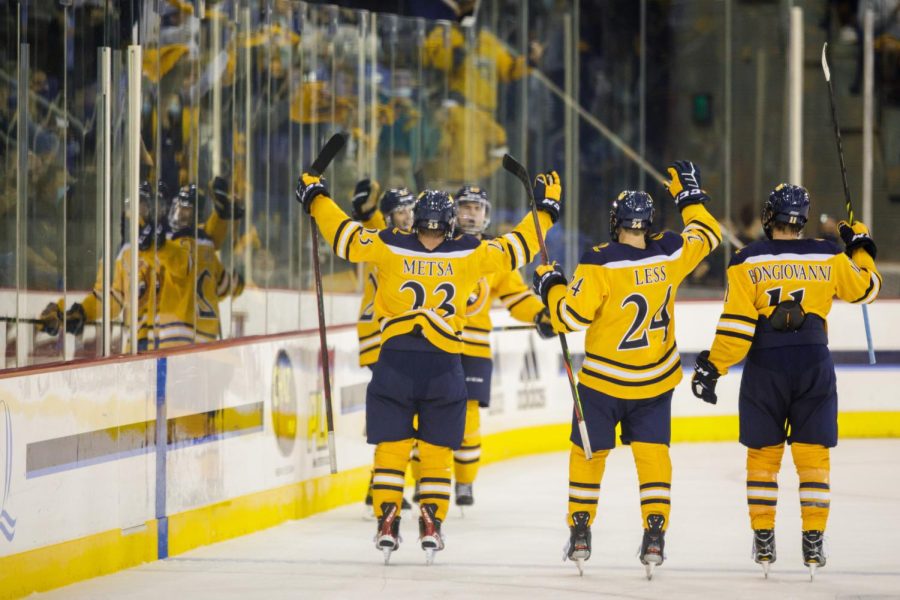 Senior defender Zach Metsa's goal and assist led the Bobcats to a 5-2 home win over Holy Cross on Tuesday. Photo from

Senior defender Zach Metsa has been one of the best players for Quinnipiac men’s ice hockey. His +6 +/- margin leads the team, and he is tied for second in points with five.

“Every time he’s on the ice, good things are happening because he’s so detail-oriented,” junior defender Jayden Lee said. “He makes the right plays and is so good with the puck.”

Metsa earned himself two points tonight as the combination of him and the team’s depth helped the Bobcats top the Holy Cross Crusaders 5-2.

Quinnipiac entered today No. 5 on the USCHO poll. This is the first time the Bobcats men’s hockey has been in the top five since February 2019, where they were No. 4.

The second line began the action in the first period with junior forward Ethan Leyh collecting his first goal of the year, shooting the puck past Holy Cross freshman goaltender Thomas Gale from the left dot of Quinnipiac’s offensive zone. Leyh’s second line partner, junior forward Joey Cipollone, assisted him on the play.

Cipollone, Leyh and junior forward Skyler Brind’Amour created plenty of opportunities for the Bobcats during the first and second periods of action.

Quinnipiac began the scoring when, who else but, Metsa received the puck from graduate student forward Oliver Chau and made an excellent pass across the ice to senior forward Ethan de Jong, who extended the Bobcats’ lead to 2-0.

We normally cut the clips, but we'll let ECAC Hockey take the lead on this one! https://t.co/Bmwd3ByrFi

Holy Cross would not give up, however. The Crusaders put bodies in shooting lanes and blocked 19 Quinnipiac shots throughout the game.

The Crusaders kept persisting with junior forward Grayson Constable firing a shot into the bottom left of the Quinnipiac net, past graduate student goaltender Dylan St. Cyr, cutting the Bobcats lead in half to 2-1.

However, Quinnipiac stopped the crusading with a pair of goals.

A battle for the puck in front of Gale led to senior forward Wyatt Bongiovanni scoring his third goal of the season. Chau and sophomore forward Ty Smilanic assisted him on the play. With this goal, the Bobcats scored their third power-play goal of the year.

Under a minute into the third period, Holy Cross cut the Quinnipiac lead in half again when junior defender Nick Hale scored an unassisted goal.

The Bobcats responded by sprinkling a little Metsa magic. Exactly five minutes into the third period, senior forward Michael Lombardi passed the puck into the middle of the Quinnipiac offensive zone, where Metsa buried it into the back of the Crusader net, giving Quinnipiac a 5-2 lead. Graduate student defenseman Brendan Less assisted Metsa as well.

Quinnipiac’s physical style of play caught up to it today, as Tellier hit Crusader sophomore defenseman Jack Robilotti, who left the ice shaken up. Tellier was tossed from the game and given two major penalties, five minutes for boarding and 10 minutes for misconduct.

With all cylinders firing as they were today, the Bobcats can stay in the USCHO top five for a long time, and prove themselves as one of the nation’s elite teams.

The Bobcats will play a weekend series against AIC, the first game being on Friday, Oct. 29, in Springfield, Massachusetts at 7 p.m.