Fall Fest is back: Rebecca Black and Trevor Daniel perform at biggest event since COVID 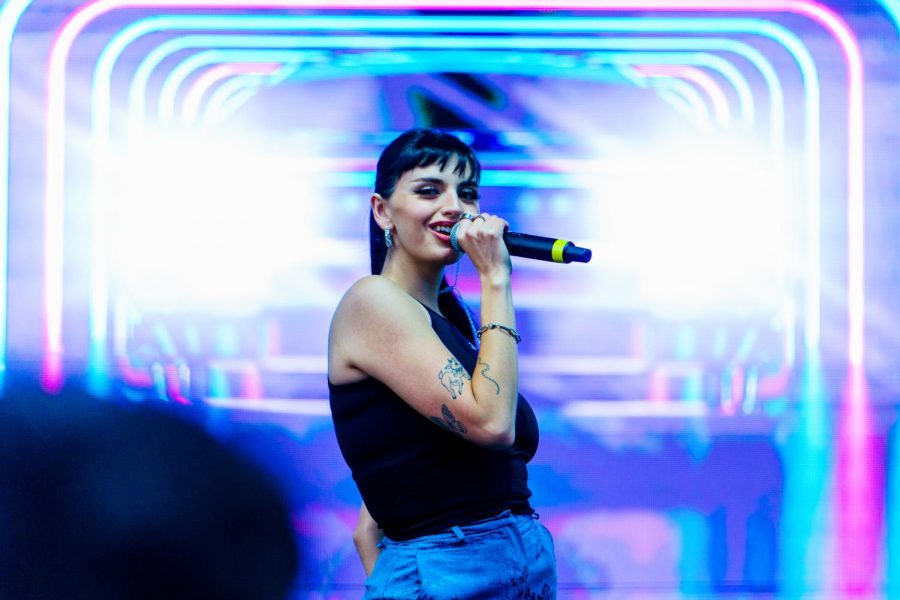 Walking through a giant inflatable Boomer the Bobcat head on Oct. 23, the Quad felt and looked more lively than it had since 2019.

Fall Fest is an annual Quinnipiac tradition that is a culmination of months of hard work from members of WQAQ, the on-campus radio station, and the Student Programming Board (SPB). The two organizations not only create an event complete with food and activities, they also arrange for live artists to perform right on the Quad. This year, the artists were Grayson DeWolfe, Trevor Daniel and Rebecca Black, performing from 2 to 6 p.m.
The road to Fall Fest
Quinnipiac University has not had an event on this scale since the fall 2019 semester when it hosted the last Fall Fest over 740 days before.

“Fall Fest has probably been in the works since the spring semester,” said WQAQ General Manager Jack Main. “It’s a really big deal that we’re doing Fall Fest because it hasn’t happened in two years.”

Much like this year’s Fall Fest, there were three performers at the last event as well: Cale Dodds, The Sulls and Those Guys. However, the day did not attract the same number of people that this year did.

“I remember my freshman year I actually had woken up from a nap and there was Fall Fest on the Quad,” said Carly Mac Manus, WQAQ’s show programming manager. “I didn’t even know it was happening, and they had this really crappy band … It wasn’t good … Now we had two years of essentially no events. So now we have all this time, money that we all put into it so there’s definitely a lot more effort going into it now.”

The team that worked on Fall Fest 2021 aimed to prevent the same lackluster response that the last one received.

“We had a good budget,” Mac Manus said. “We had around $30,000 for performers … Bigger artists like people were requesting were somewhere like $100,000, which is something that is insane and out of our budget.”

Everyone involved agreed that the performers needed to be artists that students on campus would recognize and be interested in. Both Black and Daniel are known artists across social media platforms like YouTube and TikTok. However, the budget played a big role in what artists WQAQ and SPB could get to perform on campus.

A running theme of the planning for Fall Fest was comparing the coming event to 2019, but Zachary Iwatsuki, a sophomore in the entry-level master’s physician’s assistant program, helmed the project as SPB’s mainstage chair. As a sophomore, Iwatsuki never experienced a Fall Fest due to Quinnipiac’s COVID-19 restrictions preventing large-scale events last year.

“For me at least, I’m a sophomore, so I haven’t experienced an actual Fall Fest,” Iwatsuki said. “Part of the reason they chose me for the position (of mainstage chair) would be so I could bring a fresh eye to it. I can follow in the footsteps of other people, but at the end of the day, I am bringing a new, fresh eye to Fall Fest.”

On top of the artists, the organizations booked two food trucks, Silver Sands Pizza and Fork in the Road, and prepaid for 100 orders per truck. They also organized activities for students to enjoy during the opening act and throughout the afternoon, including a pumpkin painting station, an inflatable corn maze and a mechanical bull.
A day on the Quad

When Oct. 23, finally arrived, everything was in place. Members of WQAQ and SPB surrounded the Quad in bright red shirts, ready to do their part to pull off the event without a hitch.

Students began lining up around 1:45 p.m. to enter the Quad through the inflatable Boomer arch. Members from the two clubs handed out Fall Fest T-shirts and got the crowd excited for an afternoon of fun.

“Just the fact that it’s a festival, the fact that it’s an event here,” said Joe Crickmore, a first-year graphic and interactive design major. “We haven’t had anything like this since the first week of school, and I wanted to get involved, do something big, have fun.”

The two food trucks for the day were Fork in the Road and Silver Sands Pizza. Lines to get food stretched all the way to the inflatable corn maze across the Quad, but the students didn’t care.

“It’s a good event to just relax on the lawn and listen to good music and enjoy the food trucks with your friends,” said Andrew Lemire, a junior health sciences major.

Whereas most on-campus events are only for current Quinnipiac students, alumni and students from other schools came to Fall Fest as well. Lemire brought his friend Lauren Andrade, a student from the University of Rhode Island, to experience the event with him.

“He went freshman year and sent me a bunch of pictures and so when I heard that I could come with him, I got very excited,” Andrade said.

However, students were not the only people on the Quad who were eager to attend Fall Fest. The university held a preview day on Oct. 23, for prospective students and their families. As Fall Fest began to ramp up, tours moved throughout the Quad.

Julia Kropo, a prospective psychology student from Naugatuck, Connecticut, said the event made an impression on her college decision.

“I think the event going on on campus while the tour was going on really gave a sense of community with the university,” Kropo said. “They can tell you all you want how much a community this school is, but I think the concert being present really shows that the school really focuses on academic life but student life as well.”

As the first large event since 2019, Fall Fest marked a return of a community at Quinnipiac that had not been seen last year. In- person events are a vital part of how students interact with others at their university, something that half the student body hadn’t been able to experience.

“It kinda feels like we’re having more of the college experience this year because last year was really altered because of COVID-19,” said Serena Paul, a sophomore physical therapy major.

With a Sleeping Giant bathed in multicolored trees in the background and a chill in the air, Fall Fest lived up to its name.

“We have one of the prettiest campuses in New England and for us to use it as a backdrop for an amazing event like Fall Fest is an unreal experience,” Main said.

The stars of the show
If any students were not allured by Fall Fest’s food and activities, they were certainly drawn in by the star power of this year’s slate of performing artists.

With this being the first large-scale event of the year, the SPB only had one goal when working to schedule the day’s musical acts.

“We wanted this to really kick off the semester being the biggest event of the fall so they know it’s a tradition,” SPB President Shannon Flaherty said. “We wanted Rebecca Black, Trevor Daniel, since people will know them and have recognition, even if they’re one-hit wonders, at least they know who they are.”

The performances of the day began with DeWolfe, whose soulful covers of popular songs and unique original music when combined with his friendly interaction with the crowd set up the exact atmosphere that one would expect at Fall Fest.

DeWolfe’s opening performance was followed up by a set from Daniel, who is most well-known for the popularity some of his songs have achieved on social media platforms such as TikTok.

Daniel wanted to use his performance to preview what audiences will see from his upcoming EP, “that was then,” set to release Nov. 5.

“It’s basically everything that I made last year while I had writer’s block and when I had these crazy moods all over the place while sitting inside,” Daniel said. “I definitely think you’ll hear that the tones in the project are a little more rough, but I like it.”

Daniel’s performance energized the crowd, preparing them for the headliner, Black.

Despite the majority of her name recognition coming from her days as an internet sensation when she was 13, Black stepped on stage Saturday afternoon looking to show that she has evolved past her teenage days.

“I feel like I’ve become a lot more comfortable exploring all aspects of what I have to say and finding new ways to express them,” Black said. “I really have grown up over the course of the last 10 years, and so it’s insane to watch the internet grow.”

Black used her set to showcase her current music, as well as promote her upcoming tour alongside Canadian rapper bbno$. The crowd got into the performance during Black’s cover of the 2009 song “Bulletproof” by La Roux.

She almost was able to escape her set after only performing her recent productions. However, a raucous call for an encore by the crowd of students encouraged her to return and staged what everyone had come to see, a modernized performance of her original hit song “Friday,” which had celebrated its 10-year anniversary on Feb. 10.

“It’s insane to watch the way that people have changed the way that they talk about the song now that it’s past this threshold into now being something, I guess a bit nostalgic,” Black said. “It’s cool to see so many people have so much fun singing and dancing to it. I definitely didn’t always have that experience with it, so it’s brought a lot of joy back into that.

With all of the students gathered together on the Quad to watch the artists, the vision that the SPB had for Fall Fest was cemented, being the event that finally brought the Quinnipiac community together after almost two years of feeling apart.