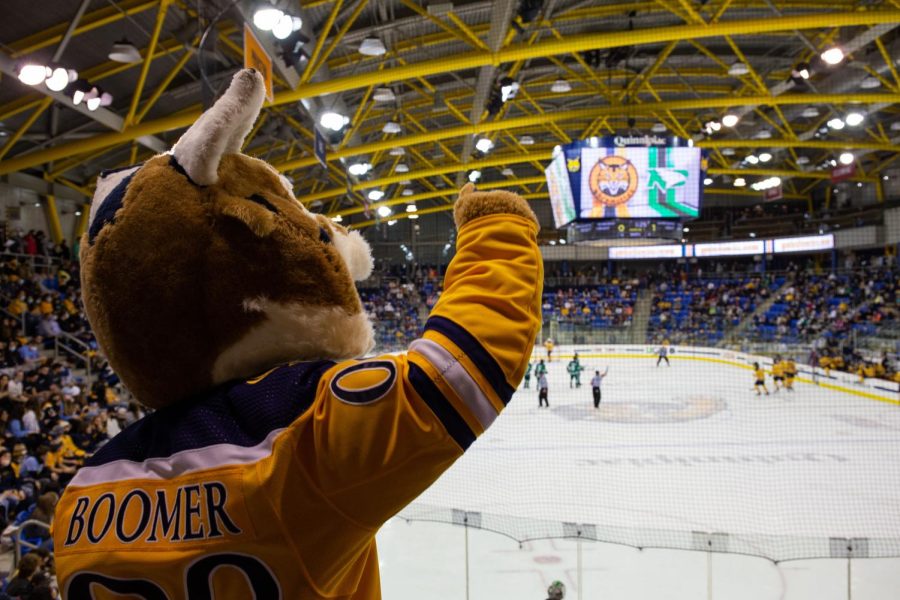 The men's ice hockey team drew audiences of 3,498 and 3,512 on Friday and Saturday, respectively, for its home opening weekend against North Dakota. Photo from

This past weekend’s men’s ice hockey series between Quinnipiac and North Dakota was one of monumental proportions, and not just because it was a faceoff between two of the nation’s top teams.

Though the women’s ice hockey team started the season on a six-game home stand, winning all six, these games marked the first time that 3,500 fans packed the People’s United Center for the men since the Battle of Whitney Avenue in late February 2020.

“Our fan base is unbelievable,” senior winger Michael Lombardi said. “We’ve had No. 1 teams or ranked teams come in and the crowd is just bumping. It adds a lot of energy to us.”

That added energy was definitely something the team missed last season, being forced to play all 29 games with nothing but cardboard cutouts in the stands during the COVID-19 pandemic.

“I think the fans play a big, big part in college hockey,” Quinnipiac men’s ice hockey coach Rand Pecknold said. “Whether at home and on the road, or a lack of fans. Sometimes you don’t have them when kids are used to them and there’s a lack of energy in the building.”

A deafening home crowd can take the life out of any team if its not ready for it.

“UMass at home my freshman year, they were the No. 1 team in the country,” Lombardi said. “Our fans led us with the energy that game, we won 4-0. They didn’t even have a chance.”

Playing in the fourth-biggest college hockey arena in the nation, No. 6 North Dakota is no stranger to the spotlight.

“It’s always a great atmosphere playing there,” Quinnipiac graduate student defenseman Griffin Mendel said. “You’ve got 11,000 people in there every game, and their students are always loud.”

Mendel, who is in his fifth year of college hockey, is the only member of the current Bobcats team to have played the Fighting Hawks in the past. He spent his undergraduate career with the University of Denver in the NCHC, the same conference as North Dakota.

“They’re heavy and a very skilled team,” Mendel said ahead of the weekend matchup. “They don’t really have many holes in their game … they’re going to grind and dump in pucks and beat you on the forecheck, so we’ve just got to be prepared.”

Quinnipiac was 0-4 all time against the Fighting Hawks prior to the weekend series, dating back to a 2006 faceoff in Grand Forks that saw current Chicago Blackhawks and former North Dakota centerman and captain Jonathan Toews net the first hat trick of his college career.

“They’re a great team,” Lombardi said. “But we believe we’re a better team, so we’re ready to go. We’re not scared of anybody, and we’re ready to play.”

The last time the two teams faced off was in the 2016 national championship game, where the Bobcats fell 5-1 in front of 20,000 at Amalie Arena in Tampa Bay, Florida. Though, that doesn’t seem to be on the mind of the coaching staff.

“No, I mean, it’s just we’re playing North Dakota,” Pecknold said. “They’re a great team. They’re top 10 every year, or top five, if not better … they’re one of the best teams in college hockey, so we’re just looking forward to competing against them.”

Regardless of the opponent, the Bobcats are looking forward to playing at home in front of thousands of Quinnipiac faithful.

“I’m super excited,” Mendel said. “Fans can always build momentum, especially when you’re at home. It’s nice when you have them on your side cheering for you whenever you make a good play … Going to have a loud night and hopefully we can give them a good showing.”

A good showing is what they got, pulling in a full crowd both nights against the midwestern opponent. The games would rank second and third for highest attendance in the 2019-20 season, only behind the regular season finale against Yale.

“It was a great atmosphere,” said Chris Cohen, a graduate business student. “Stadium was rocking, packed, it’s just good to be back with everyone.”

Cohen, along with Jonathan Mendez, a senior advertising and integrated communications major, attend every home game.

“My favorite part is when we do fill out the arena,” Mendez said. “The fan chemistry is really good, and it shows a lot of school spirit so it just gets everyone amped up.”

The two were in attendance for that game against Yale that marked the start of a 601-day fanless drought in the People’s United Center.

“We were the first people in line,” Cohen said. “We showed up at 5 a.m. and camped outside so we were able to get the first tickets … Got to meet coach Pecknold and it was a fun time.”

The Bobcats shared the wealth in their first home series of the year, taking Game One 5-2 Friday night before falling 3-1 on Saturday to split with the NCHC powerhouse North Dakota. But the real story of the weekend was the fans.

“It’s everything,” senior centerman and captain Wyatt Bongiovanni said following the weekend’s action. “We have some of the best fans in the country and some of these guys have never seen a packed building before, so it was really special.”

Following this week’s matchups against Holy Cross and AIC, ECAC Hockey matchups begin with away games at Yale (Nov. 5) and Brown (Nov. 6).