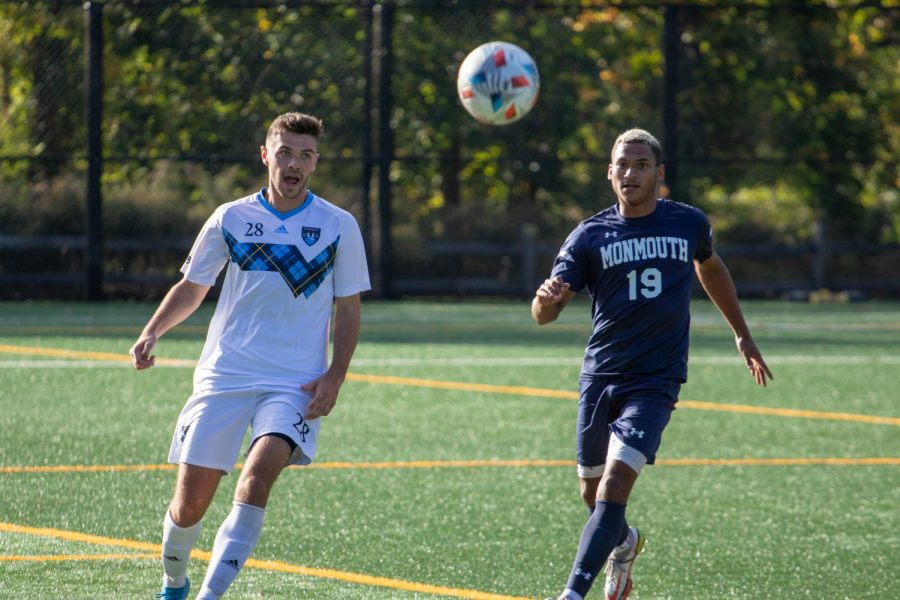 Despite missing two penalty kicks, the Bobcats hung on for a 2-1 win over the Monmouth Hawks thanks to Jason Budhai's 88th-minute game-winner. Photo from

An 88th-minute goal led the Quinnipiac men’s soccer team to a 2-1 win over the Monmouth Hawks. With the win, the Bobcats improved to 3-4 in MAAC play.

The game was physical from the beginning, the two teams got into it within the first minute after an errant elbow knocked down a Quinnipiac defender. Just 20 seconds later, a beautiful pass from junior forward David Bercedo gave junior forward Brage Aasen a wide open shot and a 1-0 lead for Quinnipiac.

Quinnipiac continued to generate offensive chances, after a shot was knocked away by Monmouth senior goalkeeper Sean Murray. Freshman forward Sam McCann was knocked down by two Monmouth defenders, leading to a penalty.

In the 28th minute, a free kick just outside the box from Monmouth junior forward Ben Zakowski curved over the Quinnipiac defense to tie the game at one apiece.

As the second half began, Quinnipiac became more and more aggressive, creating a myriad of chances which culminated in a frenzy inside the penalty box with two shots being stopped by Monmouth. One was headed out by a Monmouth defender after it looked like a goal was sure to come.

As the Bobcats continued to apply pressure. Monmouth graduate student midfielder George Akampeke knocked down a Bobcat in the box for another penalty kick, Quinnipiac’s second of the game. Murray denied Soares’ penalty kick, his second penalty kick save of the contest.

Quinnipiac finally broke through in the 88th minute after a cross from Rom Wasserman was tipped away by Murray and sent into the back of the net by junior forward Jason Budhai, giving the Bobcats the lead for good.

“Coach kept telling me that I’d get my opportunity no matter how many minutes I played, and today I took advantage of the opportunity,” Budhai said.

The Bobcats are back in action on Wednesday as they take on the Fairfield Stags at 7 p.m.