Minorities make up 18% of Public Safety since 2020 layoffs 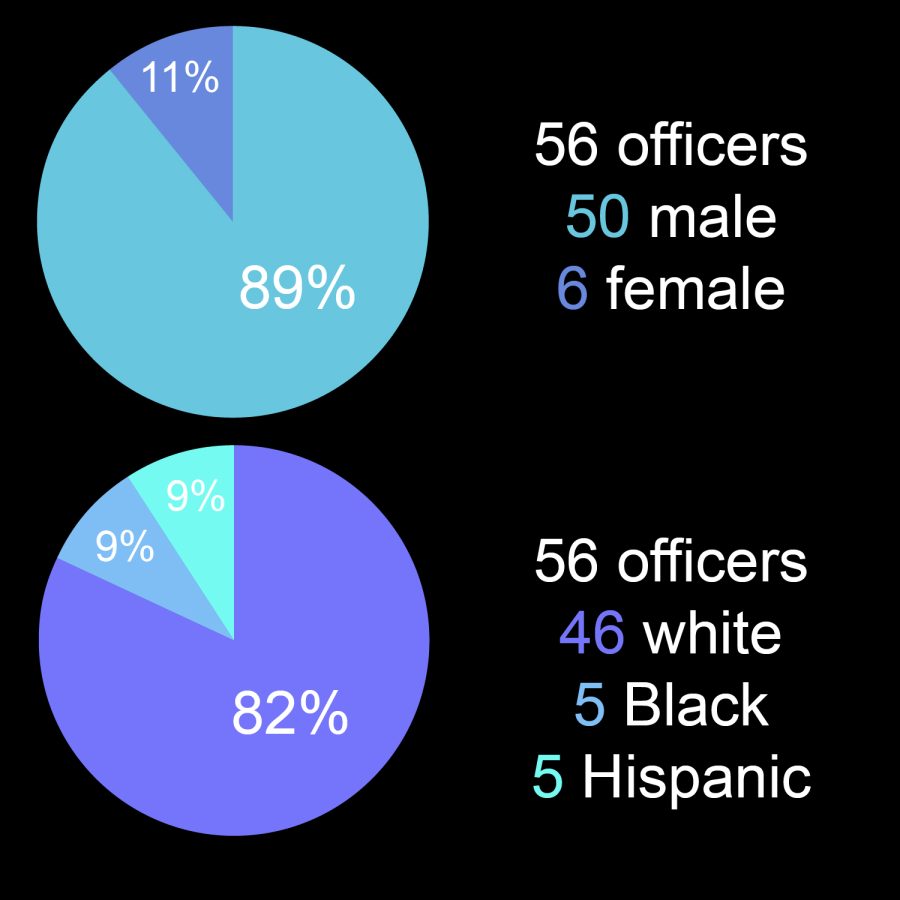 The PSD has 56 active-duty officers: 50 men and six women. Of those six women, five are white and one is Black. Of the 50 men, 41 are white, four are Black and five are Hispanic, according to statistics obtained by The Chronicle from the PSD.

Tony Reyes, chief of public safety, said while the numbers are accurate, they don’t account for individual officers who have multiple ethnic identities, or for officers’ sexual orientation.

Following the university’s budget cut in 2020 to offset a $55 million loss, the PSD lost 10 officers. All LGBTQ officers, 33% of the Black officers, 50% of the female officers, 44% of international officers and 13% of the white officers were laid off.

As The Chronicle reported last year, then-President of the Public Safety Officers Association (PSOA) Paul Violano, condemned the layoffs, which left the department with just 45 officers and less diversity.

“Students in crises or students dealing with roommate problems feel more comfortable talking to certain people as compared to others,” Violano said. “What confuses us is that President (Judy) Olian is trying to institute more diversity into the university — we understand the economic issues that are going on, but when it comes to safety, there’s no price on safety.”

Quinnipiac gave all of the furloughed officers a chance to return at some point last year, but it was not clear when. Reyes said “many” of the officers returned to the university, but did not specify the exact number of officers.

PSOA Vice President Michael Romano told The Chronicle seven of the 10 officers returned to the university, while one of the seven left for another position at the University of Hartford.

He said the union filed a grievance with the state Department of Labor after the 2020 layoffs, which later resulted in a settlement. He did not comment on the details of the settlement.

“It wasn’t a rehiring,” Romano said.

While the PSD has returned to about the same size it was before the layoffs, Reyes is considering whether or not it should reduce or increase its size.

“I am conducting a full audit of the department to not only determine appropriate staffing levels, but also ways to be more efficient,” Reyes said. “Ways we can reduce redundancies, and to ensure we are providing the highest levels of public safety services to our entire community.”

The public safety union’s vice president said between Oct. 1-20, officers have had 104 overtime shifts, with 25 of them being mandated shifts. He said the PSD is still understaffed given the ratio of officers and shifts.

“Since the layoffs (or July 2020), Public Safety has lost 12 officers, armed/unarmed, for various reasons and promoted a thirteenth to sergeant,” Romano said. “In that same time, the university has hired one armed officer, still leaving the department with, in my opinion, a serious manpower shortage.”

Romano explained that the lack of staff has left the Hogan Lot unsupervised during the evening and midnight shifts, which is a serious problem that the university hasn’t been given enough attention.

“Though our officers are diligent in their patrols, there is only some much ground that can be covered,” Romano said. “And as most times, we only have two patrol officers per shift on the Mt. Carmel campus, if they are responding to any incident, they can be tied up for some time.”

The PSD is working on improving community relations with Hamden. The department created a Community Response Team (CRT) to address concerns from locals involving students living off-campus as well as to protect and help students as needed.

The CRT is currently made up of administrative staff, including Reyes, Director of Student Conduct Steven Sweet and Administrative Lieutenant Don DiStefano.

PSD is also meeting with the Student Government Association (SGA) and other student organizations to identify concerns and ways to improve students’ experiences. The meetings usually involve topics such as parking and the New Haven shuttles, as well as diversity, equity and inclusion in public safety.

The two organizations are also identifying new pathways for students to feel comfortable reporting instances of bias, including a plan to streamline the process.

SGA President Nick Ciampanelli said when he met with Reyes, he told him about student concerns of implicit bias and discrimination from some officers.

“That’s really what spearheaded this initiative…so all members of the ‘Bobcat Community’ really feel that they are protected and safe on campus,” Ciampanelli said.

Currently, there is only a framework of a plan, but some ideas involve creating an accessible form for students to report incidents, Ciampanelli said. Both Reyes and Ciampanelli, separately, stressed that it is important to remember that the officers are on campus to protect students, and many of them “genuinely care” about the students.

Creating effective communication and an overall better relationship between the officers and the student body is important, Reyes said.

“My goal is to create mechanisms for better communication and information flow, and to be part of the university’s educational mission and experience for our students,” Reyes said.

Update 10/21/2021: The Chronicle added quotes from PSOA Vice President Michael Romano as he responded to the requests for comments a day after publication.