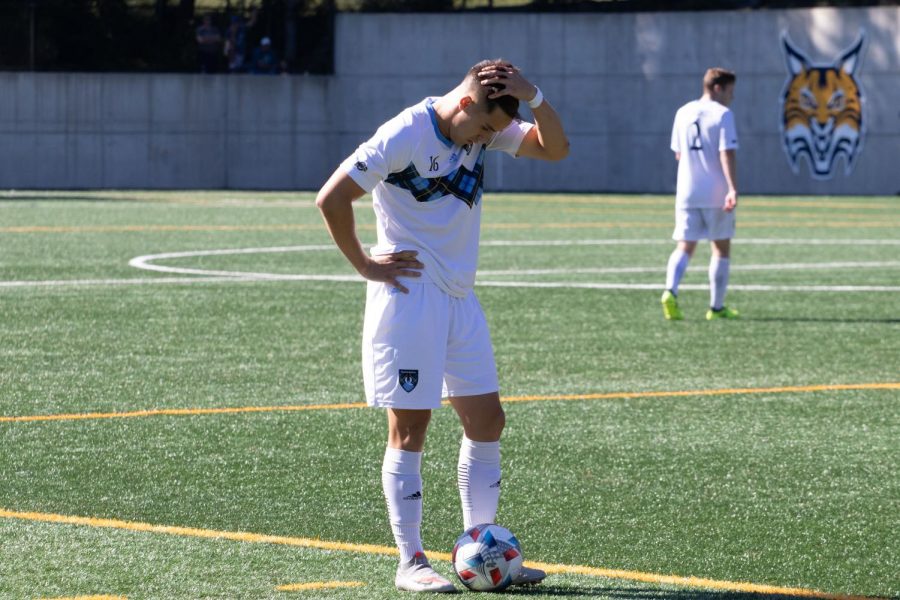 The Quinnipiac men's soccer team has dropped five of its last seven contests.

The men’s soccer team has been the shining light of Quinnipiac athletics over the last year and a half. Yes, both hockey teams have impressed, but soccer offered something that neither of them could — an outside venue.

After a year of resolute restrictions, students excitedly filled the stands to watch both the women’s and men’s soccer teams stroll into the MAAC playoffs. The women’s team pushed, but lost in the semifinals.

The men’s team fought on, paving its own way to the finals as more and more fans returned. An emotional loss to the Monmouth Hawks set the building blocks for a 2021 season built on getting over that final hurdle.

The men’s soccer team set the stage for fans to roar together after a year of stringent COVID-19 restrictions in search of something timeless — a MAAC title.

That’s why it’s so disappointing to see the team that captured the hearts of so many Quinnipiac students falter.

The men’s soccer team kicked off this season with seven straight wins, five of which were non-exhibition games. The winning streak was unprecedented.

Then the Bobcats played No. 9 New Hampshire, and it all went to hell.

Quinnipiac lost 5-0 to the Wildcats, and would go on to win just two of its next seven matchups. It now sits 2-4 in conference and ninth in the MAAC, a conference the Bobcats controlled as the No. 1 seed less than a year ago.

So what’s going wrong? Well, the defense has been leaky. The Bobcats allowed just one goal per game on average last season through nine games, which included playoffs. Quinnipiac is allowing almost double that rate this season in the 13 games thus far.

Allowing goals comes with an obvious footnote — the team is giving up too many shots on goal. Thanks to the tireless efforts of sophomore goalkeeper Antreas Hadjigavriel, who leads the MAAC in saves, the Bobcats could have easily allowed more than the 25 goals they’ve already let slip by.

They’ve tried switching it up. After primarily running a four-defender backline with strong wingbacks like senior Jordon Bennett, Quinnipiac tried something new by running a 3-5-2 — three defenders, five midfielders and two forwards.

To the average eye, a 3-5-2 may appear like men’s soccer head coach Eric Da Costa is sacrificing defense for offense. But that’s not the case, despite what a 3-2 loss to Niagara might indicate.

A 3-5-2 puts extreme emphasis on those outside midfielders. They have to run until their shoes light up, transitioning in the upper third to offer offensive width to spread the defense while still rushing back to slide in as an outside back, converting seamlessly to a five-back system.

That’s a testament to a winger’s fitness but also to a team’s depth. Most college athletes can’t run all day, and if they do, then they likely aren’t playing at their best due to fatigue.

Quinnipiac has a lot of depth but not as much on the defensive end, so why not play to its strengths? Start with a back-three defense of Bennett, and juniors Henry Weigand and Magnus Reistad, who all bring something different. Weigand is the enforcer and leader of the group while Bennett and Reistad have the athleticism and vision to cover the extra space and play the long ball.

Five midfielders get broken up into a midfield triangle and two wingers on the side. This creates a strong shape in the middle that slides together. As the ball gets swung to the other side of the field, one of the three center midfielders steps up. Simultaneously, whoever is at the top of that three-man triangle steps back to reestablish the base. It requires constant communication and strong in-game IQ, but it’s the way elite teams operate.

Place stalwart sophomore defender Luke Allen, who leads the team in minutes, at the base with graduate student midfielder Paulo Soares in defensive midfield roles. Soares has an endless work ethic that is welcomed in the midfield. At the top of the triangle, let star junior forward Brage Aasen go to work. It puts him in a position to be a facilitator as well as a goal-scorer — the more touches, the better for the Norway native who is tied for the most goals in the MAAC.

On the wings, let junior forward Tomas Svecula and senior midfielder Alex Holle play. Svecula is a versatile talent that could slide up top as a target forward with his 6-foot-1-inch frame. Holle has taken a larger role this year, and the North Haven native is fourth on the team in shots on goal. Those can convert, it just takes some statistical regression.

That leaves the two forwards up top. One plays a bit higher than the other so the defense has to be just a bit more spaced out while it creates an easier connection from midfielders to forwards thanks to the bottom striker checking down.

The 3-5-2 is a good way to get freshman forward Sam McCann on the field. It’s nonsense to keep a player of his ability off the field anymore, and this formation allows him to thrive. Da Costa called McCann a “natural substitution” to graduate student forward David Bercedo on Sept. 3, and he’s proven to be a valuable asset on top. Pair him with Bercedo, who is tied with McCann for second-most goals on the team with three, to create a good mix of experience and new blood up top.

If Da Costa prefers McCann as a bench asset, slide Aasen up with Bercedo, move Soares to the top of the triangle and play senior midfielder Dejan Duric in the middle. There are a myriad of players who can fill roles on the bench.

This season is far from lost for the Bobcats. They have a well of talent and a true superstar in Aasen. But exploring a change to a 3-5-2 formation could provide a much-needed spark. Quinnipiac will host Monmouth on Oct. 23, another pivotal game as the Bobcats search for a turning point. Only the top eight teams make the playoffs, and a win against the Hawks would go a long way toward climbing back into the playoff picture.