No. 8 women’s hockey skates to second straight tie with No. 9 Providence 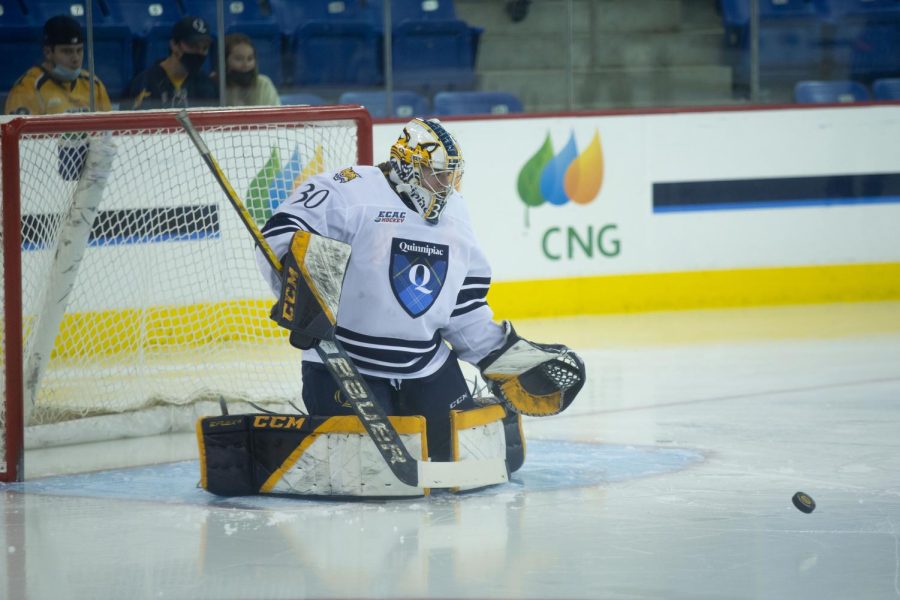 Saturday marked the second game of a home and home between No. 8 Quinnipiac and No. 9 Providence, and much like last night, after 65 minutes the game was still equal, both teams skating to a 1-1 tie.

A strong offensive attack from the Friarsnearly broke the game open almost immediately after puck drop. In a net-front scramble, a careening puck soared across the open goal mouth and was covered by Bobcats’ junior defenseman Kate Reilly, an infraction that earned Providence a penalty shot.

Luckily for Quinnipiac, graduate student goaltender Corinne Schroeder came up big in net, stonewalling Providence junior winger Bailey Burton to earn her second of what would be 32 saves on the evening and keeping the game level on a great opportunity 25 seconds in.

The rest of the period proved to be a defensive battle between the two squads. Despite being one of the highest-scoring offenses in the nation, producing 30 goals in the six games leading up to this series, the Bobcats were forced to play a conservative style of hockey early on.

As the second period got under way, both sides were looking to put a goal on the board, and Providence did so six minutes in when a point shot from freshman defenseman Lily Martinson was deflected past Schroeder by graduate student winger Hayley Lunny.

Not to be outdone, the Bobcats struck right back a minute later. A forced turnover at the blue line allowed graduate student winger Renee Saltness to walk in down the right side and let a shot go that found the stick of linemate and graduate student center Taylor House for her second goal in as many games.

“I think yesterday was a big confidence booster,” House said. “I’ve just always tried to stick to what I know I could do, and I think yesterday that went well for me getting that goal. I just wanted to come back today and build on that.”

Seconds after that goal, Quinnipiac nearly took the lead for the first time all weekend when a shot from junior winger Sadie Peart on a two-on-one deflected wide off of Providence graduate student goaltender Sandra Abstreiter.

After both sides failed to generate any offensive pressure on consecutive power plays, the Bobcats nearly broke the deadlock once again with just over a minute remaining in the frame. Sophomore winger Nina Steigauf chipped the puck off the glass at the defensive zone blue line and skated nearly the full length of the rink before rifling one off the near post and out. The shot incited an audible cheer from the Quinnipiac faithful who thought it found twine.

A majority of the third period featured back and forth hockey. Each team broke the puck out of their own zone effectively, but were unable to generate any momentum on the counterattack.

With three minutes left in the third and less than two in the overtime period, the Friars earned themselves trips to the sin-bin, but the Bobcats were unable to convert on the opportunities, going 0-5 on the power play.

“The power play is an interesting thing,” Quinnipiac women’s ice hockey head coach Cass Turner said. “It kind of ebbs and flows, and I think for us we want to continue to figure out how to get more good looks and just feel a lot more confident shooting the puck.”

Despite finishing the weekend with two ties, Turner is able to take some positives out of the series, the team’s first against a ranked opponent.

“You’re never OK with a tie, we certainly want to win,” Turner said. “I’m glad we got to play two very close games and to feel that, because it’s different to feel that intensity, that speed, and then need to make decisions and make plays within a game like that. You only get the confidence to make plays in those games by having the experience.”

Undefeated through eight games, the seventh-year head coach is confident in the Bobcats’ progression thus far this season.

“Sure, we’d like the results to have been different the last two games,” Turner said. “But we’re further along at this point in terms of composure, managing pucks, managing decisions within a game … There were some that need to be better, but it’s a lot more consistent than it normally is at this point in the season.”

After a nearly two-week break, the team will be back in action Oct. 29 as it heads to Providence to kick off ECAC Hockey play against Brown.