‘Win or lose, I want us to be authentic:’ Quinnipiac volleyball improves to 6-14 with Manhattan Sunday sweep 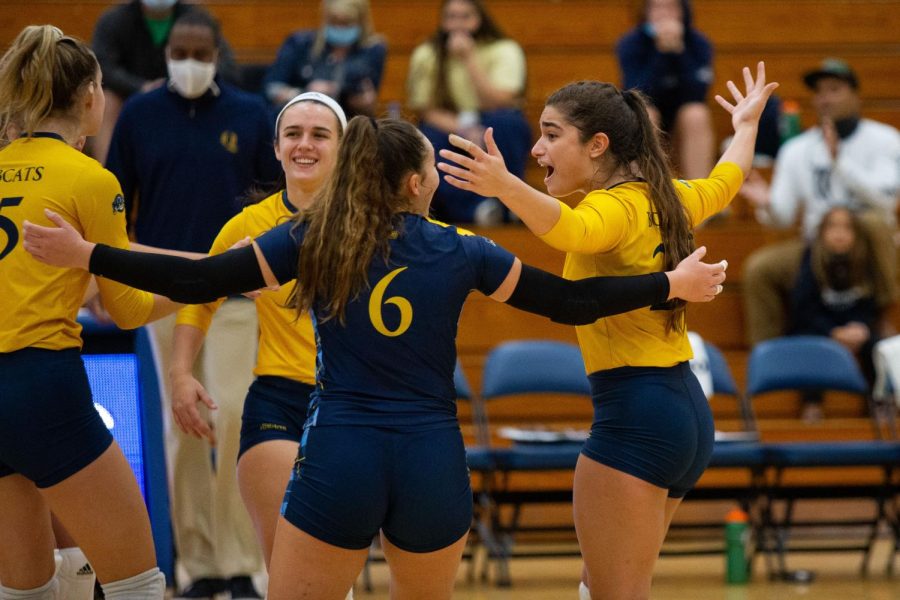 The Bobcats led by as many as eight points against the Manhattan Jaspers in Sunday's 3-0 win. Photo from

After falling in straight sets to Iona Saturday afternoon, the Quinnipiac volleyball team flipped the script on Sunday, sweeping Manhattan in convincing fashion.

The Jaspers took a 4-3 lead early in the first set as the teams traded points to open the game, but that would be the last lead they would hold in the frame. The Bobcats maintained control for the remainder of the set, fending off Manhattan to take a 1-0 lead with a four-point set win.

With its third point in the match, Quinnipiac recorded the first of four service aces on the afternoon after failing to manage one in yesterday’s contest.

The second set was more back and forth action. But once again, it seemed as if the Jaspers couldn’t produce enough consistent rhythm to build a lead, something that the Bobcats capitalized on.

Coming out of a Quinnipiac timeout with Manhattan up one point late in the set, the Bobcats went on a 3-0 run to force the Jaspers to call a stoppage of their own before finishing the series on a 7-3 stretch to put the school from the Bronx on the brink.

Manhattan didn’t go away without a fight, putting Quinnipiac into a five-point hole to kick off the third set. It maintained a lead for several more minutes before a Bobcats timeout sparked a massive momentum shift.

“It was a bit of a slow start,” senior outside hitter Maggie Baker said. “But then there was a particular huddle that was kind of like, ‘hello, get your head in the game, everyone chill the heck out and just play your position and do what you need to do,’ and then there was a switch flip and it was beautiful.”

A commanding 16-12 Quinnipiac lead was quickly stretched to 22-15 and subsequently 25-17 as the Bobcats closed out both the set and the game up eight points on the Jaspers, their biggest lead of the day.

With the win, Quinnipiac brings itself within one game of .500 in MAAC play, improving to 5-6 in the conference and 6-14 overall.

Despite the successes of the day, there are definitely still a number of things the Bobcats have to work on.

“The win is good,” Quinnipiac volleyball head coach Kyle Robinson said. “We just are not still showing our true selves, and that’s what kind of bums me out. Win or lose, I want us to be authentic … We’re a much better team than we’re showing right now, and we’ve got to get there.”

That idea of authenticity and heart is something that he said he’s tried to instill with this team all season.

“Most of our timeouts over the past few weeks, if not months, have been about pride,” Robinson said. “We’ve got to play with a lot more pride. Pride for our university and the logo that we wear on our chest. Pride for our own games. Pride for our families.”

The Bobcats continue their seven-game homestand next weekend with games against MAAC opponents Canisius and Niagara as they look to right the ship and build on Sunday’s win.