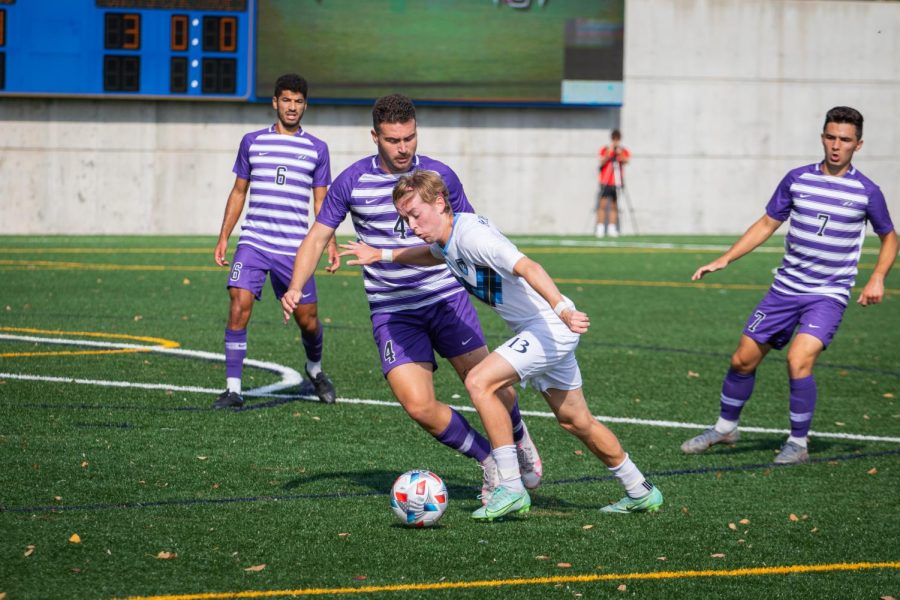 Brage Aasen added his eighth goal of the season which is tied for the most in the MAAC in a losing effort against Niagara.

After struggling to start conference play, the Quinnipiac men’s soccer team continued to struggle on Saturday, as the visiting Niagara Purple Eagles bested the Bobcats 3-2. With the loss, the Bobcats moved to 1-4 in the month of October and their sixth loss altogether.

Junior and freshman forwards Brage Aasen and Sam McCann both got Quinnipiac on the scoreboard early, as the Bobcats were firing on all cylinders out of the gate. Both goals came on an onside rush where Aasen and McCann burned through the teeth of the defense and were tasked with a one-on-one with the keeper. They had more shots (4) in the first 30 minutes than in the entire first half of a losing effort against Iona on Oct. 13.

Now with eight goals and 18 total points (leading Quinnipiac in both categories), Aasen is tied for the MAAC lead in goals and is tied for second in points.

“He is scoring goals. That is it,” Da Costa said. “(Aasen) is the same talented player that he was. He has scored some set pieces this year, which certainly helps. He is just putting his opportunities away.”

Niagara, which came into Hamden struggling, seemed outmatched at the initial kick-off. Niagara’s junior forward Jelldrik Dallmann scored his seventh goal of the season for the Purple Eagles in the 13th minute, but the team struggled for the rest of the first half.

Quinnipiac sophomore goalkeeper Antreas Hadjigavriel was locked in to start, stifling Niagara for the first 70 minutes. The highlight of his day came on the back end of the first half, as he leapt up and batted the ball away to keep the score at 2-1, where it would stay for the rest of the half.

In the 61st minute, the game started to get chippy, with both sides having players get tripped up resulting in yells from both sides. The Bobcats were not fazed as they continued to apply pressure on the Purple Eagle defenders for the next 10 minutes.

Soon after, Niagara’s sophomore midfielder Ali Alomari had two shots at point blank range. One went wide left, and Hadjigavriel smothered the other to keep the game at 2-1.

Alomari snuck one past the Bobcat keeper in the 73rd minute to even the score at two apiece. The momentum swung in Niagara’s favor until a questionable no call in the box thwarted the Purple Eagles’ attack.

Usually, these games are officiated by three referees, but after one of them took a tumble in the first half and left after halftime, the game finished with only two. Both squads took advantage of the missing official, as teams began to get more physical with each other.

The Niagara bench exploded as Dallmann scored his second of the game after getting a bad bounce from a Quinnipiac defender. Giving the Purple Eagles a 3-2 lead, Dallmann’s goal tied Aasen for the MAAC lead. After its third goal, Niagara’s relentless defense stopped any attacking attempt Quinnipiac had.

In the 87th minute, The stadium erupted as Aasen and Holle led a rush towards the Niagara’s net with three minutes left in regular time, but goalkeeper Josh Savoni stood strong and kept their shots out. The Bobcats hit the crossbar and right post right at the very end, and their comeback fell short.

Both teams were issued yellow cards during the match, as Quinnipiac midfielder Alex Holle and Niagara junior forward Rodrigo Almeida were each carded.

The stadium erupted as Aasen and Holle led a rush towards Niagara’s net with three minutes left in regular time, but junior goalkeeper Josh Savoni stood strong and kept their shots out. The Bobcats hit the crossbar and right post right at the very end, and their comeback fell short.

Da Costa reflected on the team’s struggles in both the second half of games and their season after they spent most of today out in front.

“The floodgates have opened a little bit on us, not only in the second half of games, but in the second half of the season,” Da Costa said. “We are 2-6 in this last stretch. I need to coach better and sit down and really look at things. We need to find a solution, and that’s what we are going to do this week.”

After entering today seventh in the MAAC standings, the Bobcats made their chase to the top a little more difficult. Losing its second straight match, Quinnipiac now moves to 7-6 with four games left on the schedule.

The team welcomes the undefeated, top-ranked Monmouth Hawks to Hamden on Oct. 23 at 2 p.m. This will be their first matchup since Monmouth eliminated Quinnipiac in April’s MAAC finals.