Let there be a record: The box office success of ‘Venom: Let There Be Carnage’ conceals the film’s unbalanced nature 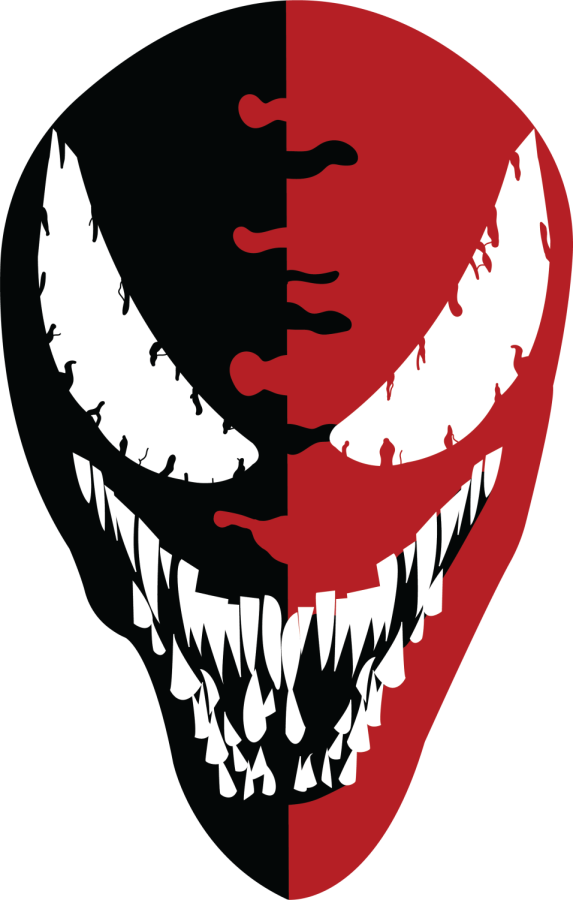 “Venom: Let There Be Carnage” came out in theaters Oct. 1 to the tune of a $90 million domestic debut. The sequel now owns the title of the most successful opening weekend in the COVID-19 era.

The film surpassed Marvel’s releases of “Black Widow” and “Shang-Chi” from earlier this year, all but solidifying the fact that theaters are back open for business. However, it’s unfortunate that this important record for the film industry arrives alongside such an aggressively subpar action-adventure.

“Let There Be Carnage” focuses on the frazzled relationship between Tom Hardy’s Eddie Brock, an investigative journalist, and his companion Venom, an alien symbiote that has taken over part of his psyche, as they attempt to put aside their differences in light of a new threat from famed serial killer Cletus Kasady.

The story begins with a glimpse into Kasady’s background, including his separation from the love of his life, Naomie Harris’s Francis Barrison, also known as “Shriek.” Even with the opening’s deliberately quick pace, the editing feels unfocused and rushed, with several obvious moments of additional dialogue recording tainting a wildly fun performance from Woody Harrelson. The entire character development of Kasady and Carnage feels unfinished, and this impression results in an unsatisfying arc for one of Venom’s most intriguing nemeses.

Rather than build up Carnage’s role in the story, the film devotes a large chunk of its runtime to Brock’s struggle with Venom’s nagging presence in his mind, which is both the film’s greatest strength and its critical weakness. The slight comedic charm of their relationship in the first film is cranked up to 11, with screenwriter Kelly Marcel delivering several scenes of oddly witty lines and absurd physical comedy from Hardy.

This is a brilliant idea on paper — one particular “odd couple” moment in Brock’s apartment stands out as a fan favorite — but its execution is shallow and inconsistent. Director Andy Serkis fails to properly set up the majority of jokes. The punchlines either fly past too quickly or never fully arrive, and most of the pair’s supposedly funny lines fall flat as a result.

The saving grace for the film is its action, and Serkis’s efforts really come alive throughout the third act. Though the final battle’s choreography and story implications are not particularly extraordinary, its visual presentation is far better than the first film.

Cinematographer Robert Richardson, who has won three Academy Awards to date, was brought in behind the camera this time around, and his technical expertise is evident in nearly every frame. The extended fight sequence between Venom and Carnage is lit with precision and style, as their CGI bodies are rarely lost amidst the chaos around them. The muddy presentation of the first film is almost entirely absent here, which makes for a much more polished viewing experience.

The action can only go so far, however. It is all-too-common nowadays for comic book adaptations to rely on well-crafted battles to cover for their messy and inconsistent plotting. “Let There Be Carnage” is one of the worst examples of this trend.

As stated earlier, Carnage’s presence in the film is empty at best, which diminishes the stakes in the conflict between himself and Venom. Michelle William’s Anne Weying, Brock’s ex-girlfriend, is given little merit, and falls victim to the tired “damsel in distress” cliche as the film draws to a close.

Also, any genuine opportunities for emotional growth between Brock and Venom are squashed by a litany of ill-timed jokes and gags throughout, which depletes Venom’s character to a level below even that of Ryan Reynold’s absurdly self-aware Deadpool.

Overall, “Let There Be Carnage” is a thunderous disappointment, as it fails to develop its campy tone in a clever way, and instead resorts to outlandish antics to build upon the few positive attributes of its predecessor.