Colton Bender is going where no other Quinnipiac catcher has gone: the MLB 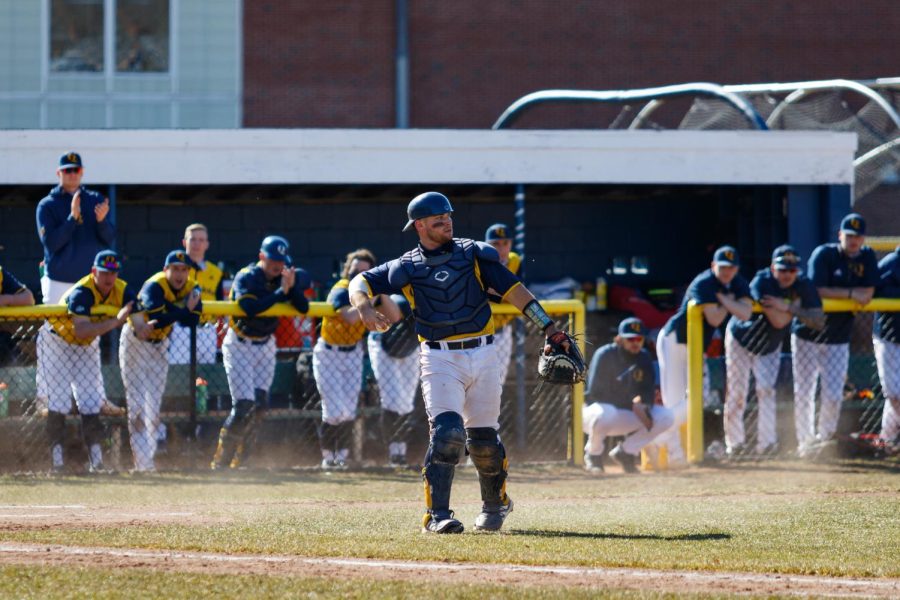 Colton Bender was the third-highest draft pick in the history of the Quinnipiac baseball program.

For every kid starting off their baseball careers, the ultimate dream is to make it to the big leagues. For Quinnipiac alumnus Colton Bender, he could not ask for more last summer.

The San Diego Padres called his name in the 10th round of the 2021 MLB Draft, making the catcher the third-highest draft selection in Quinnipiac history.

Bender is one of the most decorated Bobcats in school history, racking up accolade after accolade in his four years in Hamden. As a senior alone, he was named to the MAAC All-Academic Team, Preseason All-MAAC Team and the Buster Posey National Collegiate Catcher of the Year Award Watch List. He achieved all three of these honors his junior year as well, which helped carve a real pathway towards his MLB aspirations.

“My junior year, I had an idea I may get drafted, but it was a matter of when and by who,” Bender said. “The process is a lot harder to understand when you’re projected later on in the draft.”

Bender was the first catcher drafted from Quinnipiac in school history and the fifth Bobcat drafted since Quinnipiac baseball head coach John Delaney took over back in 2014.

“I learned a lot from my two coaches, Delaney and (assistant coach) Pat Egan,” Bender said. “They helped me with opportunities with summer baseball and groomed me as a baseball player and man.”

Bender was an instrumental part of Quinnipiac’s 2019 MAAC Championship, leading the squad with a .322 batting average. He also had six total hits, including a 4-for-5 effort in the NCAA Tournament Greenville Regional against Campbell.

After getting experience at Lyman Memorial High School and then contributing at a high level at Quinnipiac, Bender found himself playing for the Bourne Braves in the legendary Cape Cod Baseball League (CCBL). The CCBL has been the premier summer league for collegiate players since 1885. Bender was getting ready to play a CCBL game when he received the call that changed his life.

“Emotions were very high and tears were flowing,” Bender said. “My parents were on their way to my game to watch. They were the first people I called, and the second was my uncle.”

After getting that phone call, the goal changed from a pastime to a position of employment. It was something he has wanted since his days at Lyman Memorial High School.

“I fall in love with it (baseball) more and more every day,” Bender said. “The only difference is that it is my job now.”

Through 2019 and a COVID-19-shortened 2020, both Bender and Delaney had multiple conversations and meetings with professional scouts.

“They want to learn about you and let them know who you are as a person and player,” Delaney said. “Quinnipiac is a very small school, so it is difficult for teams to know what pack of players are coming out of there. It takes guys a bit to figure out what Quinnipiac is about and that helped the process a lot.”

After plenty of minor league teams went under due to the COVID-19 pandemic, every pro team had to cut down their minor league systems to a select few teams. For San Diego, one of the remaining teams was the Lake Elsinore Storm. One of Bender’s teammates, outfielder and first baseman Matthew Acosta, could tell that Bender has developed into a pro.

“Colton has adjusted very well,” Acosta said. “College baseball will always get you ready for professional baseball to some degree.”

Playing for the three-time league champion Storm, Bender hit his first professional home run on Aug. 7, helping to lead his team to a 4-3 victory over the Rancho Cucamonga Quakes of the Los Angeles Dodgers. Bender hit seven home runs in a Quinnipiac uniform and brought a lot of power to both gaps to single-A ball.

“Colton is a funny guy and a great friend,” Acosta said. “He is always looking out for his teammates.”

Being there for others is something that was instilled in Bender from his youth. Before his days as a Quinnipiac student, Bender worked with children with special needs and Down Syndrome during both the baseball and basketball seasons. Bender also was the winner of the 2017 Eastern Connecticut Umpire Board Sportsmanship Award.

Bender is a leader in the Storm locker room, and it is certainly something that was learned here at Quinnipiac.

“He wanted to win,” Delaney said. “He was extremely determined to get the team in the right direction. From a leader’s standpoint, he wanted everybody to be locked in. That’s what you expect from your leaders and he was certainly one.”

The transition from college to the pros came naturally to Bender.

“The adjustment to Lake Elsinore was very easy for me,” Bender said. “Being a pro is something you have to want. The people I meet every day are still people, and even the big leaguers, once you meet a few, they are no different from me and you.”

Those major leaguers that Bender once looked up to are now teammates of his. San Diego is also home to some of the game’s brightest and flashiest stars, including shortstop Fernando Tatis Jr., third baseman Manny Machado and starting pitcher Yu Darvish. While Bender hasn’t reached the level where he plays daily at Petco Park in San Diego, he certainly has the support system and athletic ability to make it a possibility in the near future.

“Scouts were raving about (Colton),” Delaney said. “He has all the stuff we want at our level. He is getting what he deserves and he will only get better and better. In four or five years, we can be talking about the big leagues.”