Rumor has it: Gossip is good

Gossiping is a social skill that gets misconstrued as malicious 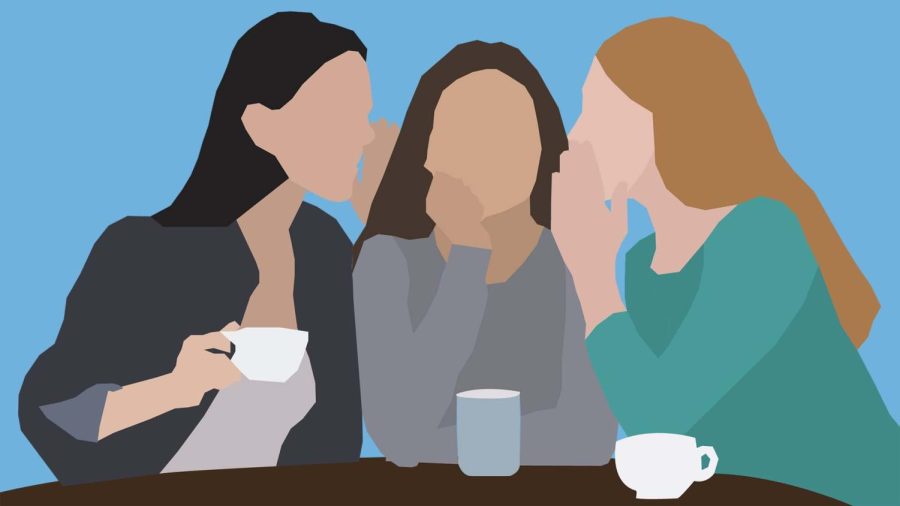 Do you want to know what separates humans from animals? The fact that we can gossip, and I am so glad we do.

When the definition of gossip really gets broken down, it’s telling stories or relaying information about other people. That may sound like a negative thing, but why? Gossip shouldn’t automatically be perceived as mean-spirited.

I come back at the end of my day and tell my roommates about my entire day, making sure to include the funny or interesting encounters I’ve had.

“The Starbucks barista told me they loved my nails,” I said “They want to get this color next time they go to the salon.”

Some may not consider that a piece of gossip, but ultimately, it is. I told a story about someone who wasn’t present in the room.

Of course, some gossip is more interesting and exciting than other details, but people ignore the fact that not all gossip is meant to be harmful. It can be as fun and anecdotal as someone copying your nail color. Now, when my roommates go to Starbucks and see the barista with the same nail color as me, they know why.

Gossip should rarely be secretive or include false information.

In fact, in the social science field, it is well-known that gossiping is part of the human experience, with research being conducted on how it is a social skill that humans develop.

In an interview with NBC, Frank McAndrew, a psychology professor at Knox College, said gossip is likely a skill that helped certain humans outlive others. The social skill has been passed down generationally and even genetically, since those who were good at gossiping were essentially good at being humans.

People who were not interested in the going-ons of those around them were at a competitive disadvantage.

“They were not good at attracting and keeping mates or maintaining alliances,” McAndrew said. “The ones who weren’t interested in the goings-on of other people sort of got weeded out.”

Since people who were uninterested in the lives of those around them had less of a chance of reproducing, that means we all come from a long line of gossipers.

Another reason gossip should be considered a positive thing is that it can benefit people mentally. Sharing your thoughts and feelings with people is a healthy way to vent, and that’s essentially what gossip is.

Having a safe space to share your thoughts and opinions is the most important thing in any relationship. Therefore, being able to gossip about your day should be the norm.

It’s also how people form connections. For example, my closest friend from home and I are friends because other people told her I was “crazy but fun.”

My friend wanted to find out for herself what our mutual friends meant, and now we’ve gone on nearly six years of friendship. If those other people hadn’t gossiped about me, she probably wouldn’t have wanted to get to know me.

Gossip is often used in this way. People can share their thoughts about someone else and if they are in agreement, it strengthens that bond. People love when what they’re feeling is true, which is what makes gossip such a valuable tool in relationships.

A study from the Journal of Social Psychological and Personality Science tracked the conversations of 467 people and determined how much of the gossip was either positive, negative or neutral.

The study showed that 75% of gossip that the participants said was neutral. This supports the reason gossip should not have the negative connotation it does. If most of the gossip shared amongst people is neutral, it should start being seen as the tool for connection that it is.

Something else to put into perspective is that even when gossip is considered negative, it still should not be seen as an evil activity.

McAndrew told NBC that if someone shares negative gossip, it means they trust the person they’re speaking to. The purpose of gossip is to share information, and sometimes that information is valuable.

A good example of why negative gossip is important to society would be to warn someone about a potentially harmful relationship they are in, since gossip is a sign or trust.

Obviously, there are people who can break this act of trust. Those people are bad gossipers who share false information about others or tell people something personal about one of their friends.

These people are the reason gossip is unfairly viewed. McAndrew pointed out that people who gossip using incorrect or inappropriate information are considered to have poor social skills, according to social scientists. People who know when and how to aptly gossip will likely have stronger connections to the people in their lives.

Gossiping is definitely my favorite activity, and now you don’t have to hide that it is also yours.