Learning is the focus for the 1-9 Quinnipiac field hockey team, which is trying to find positives in a rough season 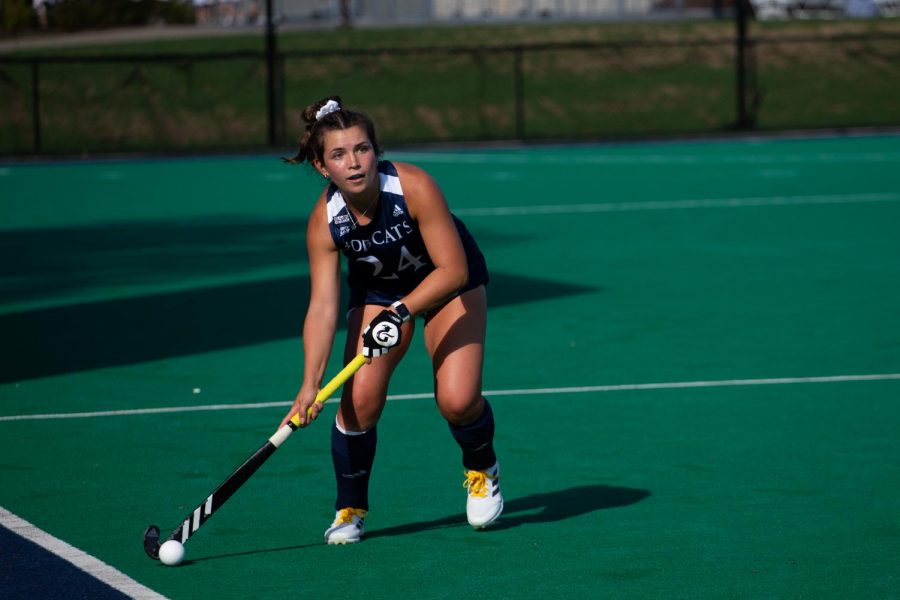 Anyone following Quinnipiac field hockey will admit that the 2021 season has not been filled with many positives. The field hockey team is 1-9, which includes an in-conference record of 0-3. Quinnipiac sits at the bottom of the Big East standings with Providence, the closest team to them, owning a 5-7 record.

There is no lack of experience as the Bobcats have 20 returning players on the roster. The only new non-freshman addition to Quinnipiac’s 2021 roster is junior forward Stella Tegtmeier from Germany.

Quinnipiac has struggled mightily to find the back of the net this season as it has been outscored 39-8 and been held scoreless in seven games. Since 2015, the team has averaged 150 shots in a season with an average of 93 shots on goal, for a team average shooting percentage of .624.

The future looks bright, however, as six of the Bobcats’ goals belong to Argentinian freshman forward phenom Emilia Massarelli. As a result of her scoring output, Massarelli ranks in the top-10 in the Big East in goals. She is among a strong freshman class that totals eight new players.

Massarelli showcased her perseverance and commitment to Sunday’s overtime win against Yale as she played through broken ribs.

In the world of sports, self-critique is important even when reflecting on Massarelli’s impressive season up to this point.

“I think we still haven’t figured out how to play with her,” Quinnipiac field hockey head coach Becca Main said. “That’s something we have to do, but there’s really great things in store for her, in terms of putting the ball in the net for us.”

Massarelli isn’t the only player on the team that should be receiving praise. Another player the offense has built around is Tegtmeier. Capitalizing on her 6-foot frame and long reach, Tegtmeier, along with Massarelli, is typically the one leading charges into the offensive zone for the Bobcats.

Until Sunday’s game Massarelli, Tegtmeier and senior defender Jess Halley were the only Bobcats to register points this season.

Since her freshman season in 2018, Halley has ranked in the top-10 each season in points for the Bobcats. In fact, last season Halley led the team in assists while being tied for the team lead in goals. In her Quinnipiac career, the senior has three goals and seven assists.

Massarelli is the second international player to lead Quinnipiac in goals since 2015, with Bianca Strubbe of Poland doing the same in 2019. Last year, Halley became the second international player to end the season tied the team lead in goals since 2015. Dayna Barlow of South Africa did so in 2017, also ending the season tied for the team lead in points.

The team has been in a rut since 2013, the last time it finished the season with a win percentage above .500. Since then, the team has a record of 43-71-1. However, while sports like soccer are in the MAAC, field hockey is a member of the Big East. While the MAAC has its own set of challenges, the Big East is a tougher conference that tends to push teams.

“When you’re playing in the Big East game, or an ACC game, or a Big 10 game, you have to be as fit as your opponent,” Main said.

The Bobcats pride themselves on staying fit as the team mantra is “Run every day, run every day.”

With a thrilling win via overtime against Yale, the Bobcats notched their first win of the season as they enter the home stretch. This is the Bobcats first win against Yale since 2017, moving them to 7-12 against their rivals all time.

Next on the schedule, the team hosts UConn on Friday, Oct. 8. This marks the first of four straight inter-conference games. The Bobcats then finish off their season on Sunday, Oct. 31 at home against Sacred Heart.