Hate crimes and violence against women at Quinnipiac increased in 2020 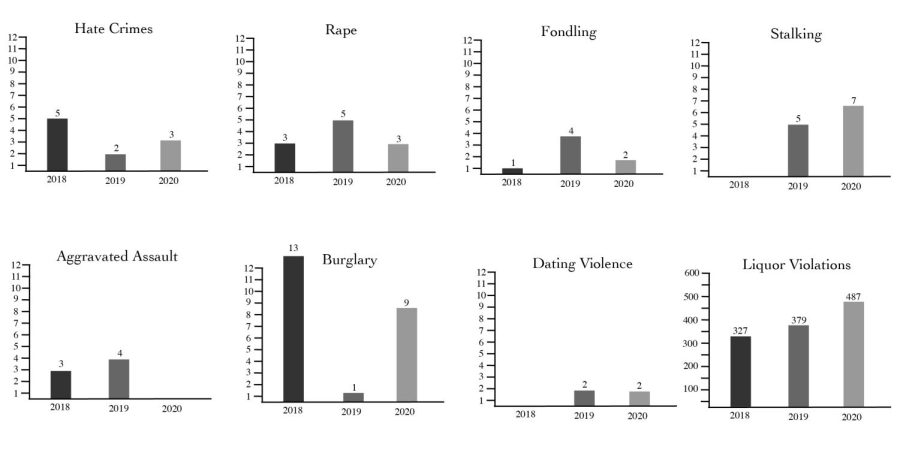 Quinnipiac University reported an uptick in hate crimes, violence against women, burglaries and liquor law violations in 2020, according to the 2021 Security and Fire Safety Report the university released on Friday.

The university initially reported on Friday nine hate crimes in 2020. Associate Vice President for Public Relations John Morgan told The Chronicle on Tuesday that the Clery Center did an audit and only qualified three of the nine “preliminary” reported incidents as hate crimes.

Among the three, two hate crimes were against national origin, and one was against race. All were reported as intimidation acts.

Vice President for Equity, Inclusion and Leadership Development Don Sawyer clarified that the other six incidents could be considered as bias incidents, not Clery Act-defined hate crimes.

Ali Vidallon, senior nursing major and president of Gender and Sexuality Alliance (GSA), said the increase is disappointing and reflects irresponsibility. As a student of color and a member of the LGBTQ community, she said she always has to be more aware of her surroundings, especially with how she interacts with others in different settings.

“These events are not completely detached from one another,” Vidallon said. “They are cultivated from the campus’s culture and reluctance to prevent this unwanted behavior.”

“Especially when the increase of hate crimes against Asians and Black Americans was so severe this year and last year,” Gorero said.

The FBI reported a 40% spike in hate crimes targeting Black people and a 70% uptick in hate crimes against those of Asian descent from 2019. Gorero said the impact from the rise remains with her.

“I still even feel unsure and even scared to be in public even though in the recent months, it’s been rather quiet or it’s probably because the media are no longer wanting to cover these hate crimes anymore,” Gorero said.

Students think the official numbers don’t reflect what really happened. Vidallon said there is no doubt that there are more incidents that went unreported. There are many reasons people choose not to report, Vidallon said, including fear of retaliation and how “mentally taxing” the reporting process is.

“I hear countless stories of both micro aggressions and overt prejudice from people around me that are not only disheartening but incites anger and division amongst the different communities,” Vidallon said.

When it comes to reducing hate crimes, Vidallon said she thinks the university has to implement an effective and quick response while actively trying to prevent harmful thinking and behavior in the student and staff experience.

“I think it’s important to look at past events and recognize the similarities in order to understand why they escalated the way they did,” Vidallon said.

She calls for transparent and accessible discrimination policies and diversification of the Quinnipiac community as a whole.

Sawyer said the university can’t prevent hate crimes because racism, sexism and homophobia exist in the world. He said Quinnipiac is just a “small microcosm” that represents the same things as the outside world.

“When students apply to come here, no one put in the application ‘hey, by the way, I’m a racist’ or ‘I’m a homophobic, but I want to come to Quinnipiac,’ so we don’t know,” Sawyer said. “So things are going to happen on campus.”

However, Sawyer said the university is responsible to educate people and expand the students’ worldview to be preventative.

Quinnipiac has been criticized in the past for its poor response to racism allegations. Gorero said the university is always late on responding or spreading awareness against hate crimes, which she said was different from when Chief Experience Officer Tom Ellett’s apartment was vandalized.

Students received two emails about the vandalism. One was from President Judy Olian the night of the incident stating that “this behavior won’t be tolerated.” Another was from Public Safety Chief Tony Reyes two days after updating on the situation.

“When the hate crimes occurred, the administration was late to address the hate crimes,” Gorero said. “Meanwhile, they addressed the vandalism almost immediately.”

She said she felt like the energy and the effort to address hate crimes was different and that it shows bias on where the administration stands.

“I feel as if they aren’t as direct when it comes to expressing or extending a hand to the students to show that they are against this type of behavior,” Gorero said.

Vidallon said the university should apply the same sense of urgency and concern as it did for the vandalism at Ellett’s apartment to all incidents that target the safety of people on campus.

In response, Sawyer said he believes that the university responds in the same way as hate crimes are reported. He also said those are two things that can’t be compared “apples to apples.”

“The incident with (Ellett) is different than this, one was because people are calling it vandalism,” Sawyer said. “I don’t think it’s vandalism, I think it was an act of aggression, intimidation. We would take that as seriously if it happens to a student or faculty member.”

Sawyer said sometimes students are not aware of everything that happened. He explained that the university responded to hate crimes with statements and actions in the past.

Besides the rise in hate crimes, the university also reported seven stalking incidents in 2020 under the violence against women, a 40% increase from 2019. Dating violence in 2020 remained the same as 2019 at two reported incidents.

As a woman on campus, sophomore undeclared major Faith Brackley said it’s alarming that violent crimes against women increased. When it comes to communication, Brackley said the university should notify students.

“Quinnipiac should alert students because, personally, I would prefer to not to be oblivious to what’s happening,” Brackley said. “They say ignorance is bliss, but when it comes to safety for students and faculty, Quinnipiac should let us know.”

Even though Brackley feels safe at the university, she said the only thing that bothers her is that anyone could come on campus during the day by saying they’re visiting friends or family.

“Maybe I’m a little paranoid because nowadays, we’re taught in school what to do in the case of a school shooter, but something could happen,” Brackley said.

The university hired a full-time Title IX coordinator and a civil rights investigator to deal with hate crimes and violence against women while educating students on the reporting process, Sawyer said.