Nine-game streak is over: QU field hockey beats Yale in overtime for first victory of 2021 season 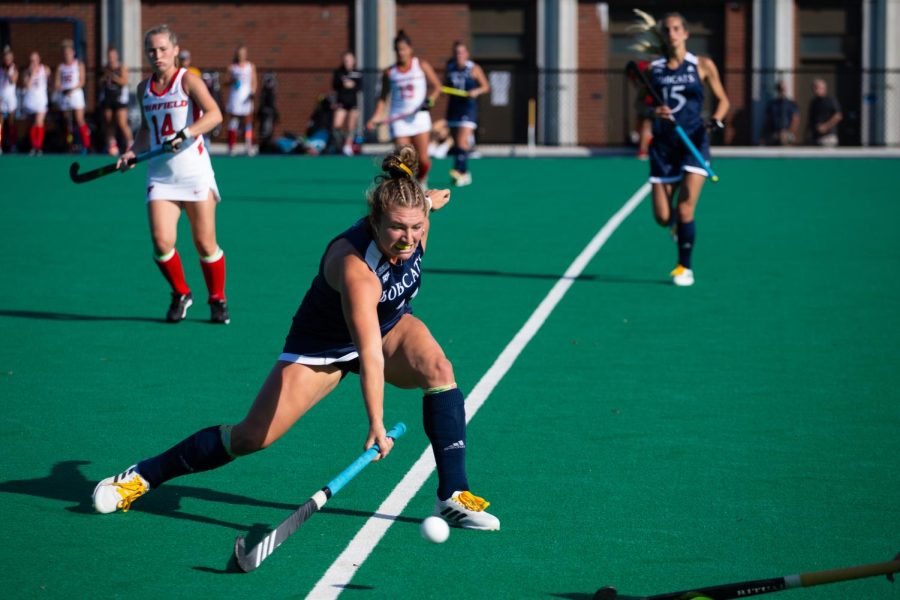 The Bobcats broke their nine-game losing streak with a 3-2 overtime win against the Yale Bulldogs. Photo from

The Quinnipiac field hockey team picked up its first win of the season on Sunday in a thriller against its rival Yale, winning 3-2 in overtime. The win broke the Bobcats’ nine-game losing streak to start the season, a losing streak that left them at the bottom of the Big East standings.

Hoping to respond well after Friday’s 5-0 loss to No. 12 Liberty, the Bobcats struck fast with a goal from freshman forward Emilia Massarelli less than five minutes in, giving them the lead for the first time in any game this season.

The game then quickly became a defensive battle between the two squads, with both teams fighting to find opportunities on each side of the field, but consistently coming out empty-handed. The Bobcats’ defense specifically was anchored by junior goalkeeper Mack Vorel, who led both teams in first-half saves, slamming the door on the Bulldogs on four separate occasions.

Despite the strong defensive effort from the Bobcats, their season-long struggle with penalty corners reared its head once again. After allowing 13 against Liberty on Friday, the Bobcats gave up another six to Yale on Sunday, with the Bulldogs’ sophomore forward Lena Ansari converting on one with just under six minutes left in the third quarter, tying the game at one.

After another 15 minutes of defensive stalemate, the Bobcats reclaimed the lead after another masterful goal from Massarelli with less than five minutes to go in the fourth quarter. On a breakaway, she found the inside of the net off a shot that seemingly rattled off every edge of the goal’s frame.

“(Emilia’s) a rare one,” Quinnipiac field hockey coach Becca Main said. “I know that there are special players out there, and I’d put her up there as the one-percent, because the team is enveloped in what she does. The entire team is overjoyed by what she does, and they know to get her the ball.”

The next moments turned into absolute chaos as the Bobcats attempted to stave off a final Bulldogs rush. The Bobcats were successful for about four and a half minutes until a Quinnipiac penalty with ten seconds left allowed Bulldogs sophomore midfielder Maddy Wong to score the game-tying goal off a penalty corner with three seconds left in regulation, sending the game into overtime.

Coach Main put her team in an interesting position to start the extra period, deciding to limit the play of Massarelli.

“She started on the field, but we took her off right away,” Main said. “The goal was that Emilia is really recovering still from an injury back at Hofstra, she has a broken rib and she’s playing with it. So, we knew that we were going to give her two runs. She was allowed to go up and back twice, which is what she did, and then she had to sit.”

The strategy would eventually prove successful for Main and the Bobcats. After a flurry of scoring opportunities for both teams, an excellent feed from the Bobcats junior forward Stella Tegtmeier to redshirt senior forward Brooke Whipkey finished off the Bulldogs five and a half minutes into overtime. The goal itself would be the first one this season for the Bobcats not credited to Massarelli.

This being the Bobcats’ first win of the season was not lost on the team.

“It felt good,” Main said. “We’re trying to figure out who we are. We still are not sure. We do some incredibly elite level things, our goals were high level, I think that was great.”

Beating their rival, Yale, added a sentimental nature to the win for the Bobcats.

“We always love to go in hard against Yale,” Whipkey said. “We came out with a lot of energy in the locker room, brought that out on the field and just went and played as a unit.”

The Bobcats will look to maintain the energy from Sunday on Friday at home against UConn at 3 p.m., starting a stretch of four straight games against Big East opponents. The Bulldogs will attempt to respond from this loss this Saturday at home against No. 12 Harvard at 1 p.m.