Penalty corners continue to be a problem for the Bobcats 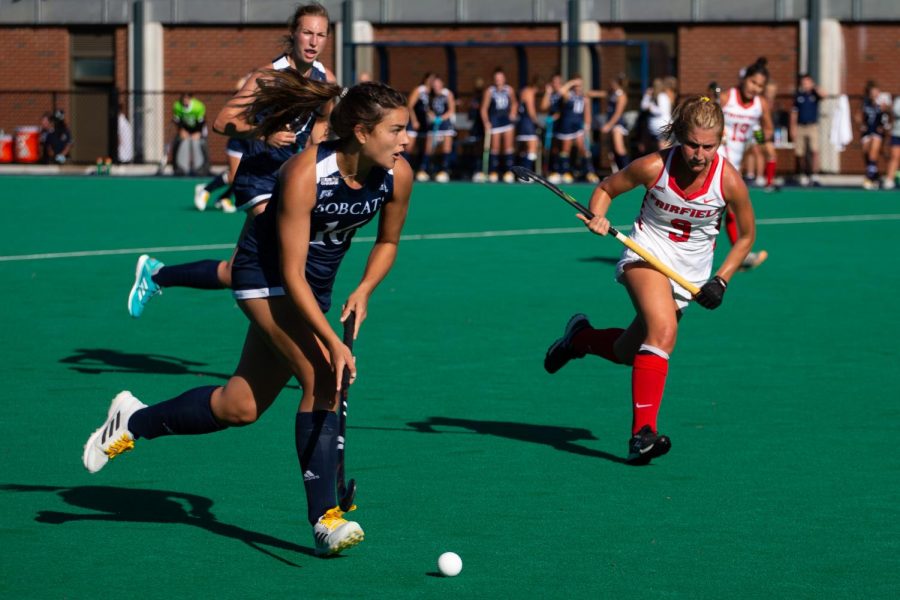 The Quinnipiac field hockey team won its first game of the season in overtime on Sunday against Yale.

The Quinnipiac field hockey team has had a very difficult 2021 season, and it continued today in a 5-0 loss against No. 12 Liberty. The Bobcats are winless in their last nine games.

The Flames started the game hot, no pun intended, scoring a goal in less than two minutes. Liberty senior forward Jill Bolton was able to get open for the score and give her team a quick lead. The Bobcats defense played well the rest of the quarter and was down 1-0 going into the second.

In the next period, the Flames kept forcing penalty corners and after three misses, they converted on the fourth try. Junior forward Daniella Rhodes was able to get a tip shot in to bring the Liberty lead to two. The Bobcats trailed  2-0 going into the second half.

In the third quarter, Quinnipiac junior goaltender Mack Vorel was called for a penalty off a penalty corner attempt, which gave Liberty a penalty stroke. The Flames thought they made the stroke, but the referee said Liberty’s player stick went too high and the goal did not count. After an official review, the call stood.

Later in the quarter, Liberty sophomore midfielder Reagan Underwood retrieved a rebound off a penalty corner shot that was hit off the goalie. Quinnipiac was down 3-0 going into the fourth.

In the last four minutes of the game, Liberty scored two goals, one by sophomore midfielder Lexi Hosler and another from Rhodes, her second goal of the day. Rhodes scored off an impressive shot right out of a penalty corner. The final score was 5-0 in Liberty’s favor.

The Bobcats gave up 13 penalty corners on the day, and Liberty was able to capitalize on three of them.

“Believe it or not, it was a focus for us to not give as many (penalty corners),” Quinnipiac field hockey head coach Becca Main said.

Vorel had an impressive performance although the opponent managed to score five goals. She had nine saves on the day, including six in the third quarter.

“She’s been on track to be like this for her career,” Main said.

Looking towards the offense, star freshman forward Emilia Massarelli has been the best offensive player for the Bobcats, scoring all four of the team’s goals for the season. The Flames knew that and were double-teaming her when she had the ball on a few occasions. Liberty was making anybody else beat them.

“They are really a classy opponent … it is really nice to play a really respectful, good opponent,” Main said about the Liberty Flames.

The Bobcats will look to notch their first win of the season Sunday afternoon against the Yale Bulldogs.