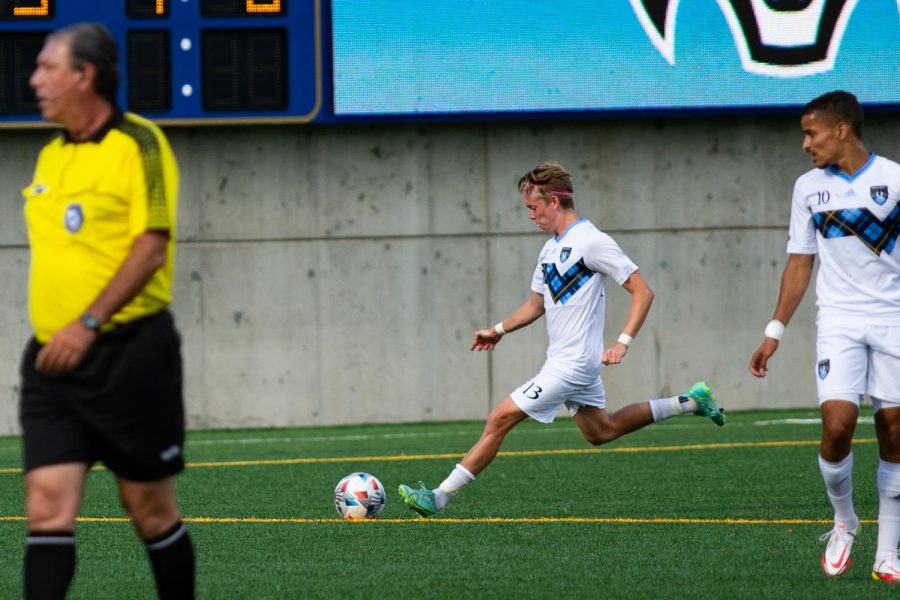 The Quinnipiac men’s soccer team hosted its first MAAC game of the year in Hamden. With the win, the Bobcats moved to 6-2 overall on the season and first in the MAAC standings.

Aasen was a man on a mission in Wednesday’s game against the Saints today. Before the game, he led the Bobcats with three goals and one assist on the season.

Out of the gate, the game was slow as can possibly be. Both teams played very passive and didn’t attack early. There were only four total shots on goal 23 minutes into the game. Each teams’ defenses were responsible for setting the tempo early. As intensity started to ramp up, both offenses started to make headway in the game.

In the 27th minute, the Bobcats struck first. Junior forward Tomas Svecula and senior midfielder Dejan Duric set up Aasen for a beautiful goal in front of the net to put the Bobcats up 1-0. Quinnipiac would end the half with a 1-0 lead.

Quinnipiac men’s soccer head coach Eric Da Costa admired the way the team picked the intensity up in the first half after a sluggish start to the game.

“In the beginning of the game, we didn’t have enough urgency,” Da Costa said. “However, I loved how the team rallied around each other towards the end of the first half. I think that really set the tone for the second half.”

Siena’s first goal tied the game at 1-1 in the 54th minute on a tremendous cross from junior defender Antonio Linge to freshman midfielder Frederic Storodegard. Siena wouldn’t rest on its laurels, as it instantly scored another goal two minutes later.

In what seemed to be a very controversial call in the box, Siena took a 2-1 lead on a penalty kick from freshman midfielder Jacob Sandun Arachchige-Jensen. This goal sparked the Saints, but the Bobcats wouldn’t surrender.

Da Costa voiced his doubts about the controversial call after the game, but praised his team for its efforts in spite of it.

“That second goal by Siena didn’t seem like a penalty at all in the box, but it didn’t take a toll on our team,” Da Costa said. “The team rallied in spite of that questionable call and that’s what ultimately propelled us to victory.”

After Siena’s two second-half goals, the momentum appeared to swing toward the Saints. However, Quinnipiac didn’t quit, striking back with an equalizing goal in the 81st minute. Junior forward David Bercedo scored the goal, with Aasen and senior defender Jordan Bennett assisting him.

In the 64th minute, Quinnipiac had an ideal chance to go ahead on a penalty kick from Svecula. However, Svecula’s ball hit the goalie, then the ball bounced out of the goal after hitting both posts. From there, the game would remain knotted at 2-2 until extra time.

Just 52 seconds into overtime, Aasen added to his monumental day, scoring the game-winning penalty kick goal. The star forward scored after getting pushed down in the penalty box. Just as he was about to kick the ball, the goalie committed forward, which opened up the left side up for Aasen to finesse the ball into the back left corner of the net. The crowd went berserk, as the team piled onto Aasen after the game winner.

Quinnipiac managed to pull out a gutsy win today against its first MAAC opponent in Siena, but there is more work to do against the other MAAC opponents coming up. The Bobcats face Marist next, who they play this Saturday at 7 p.m.