Not your momma’s drama 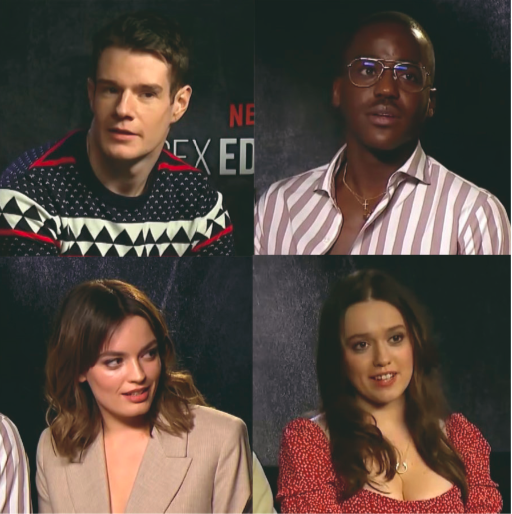 The ensemble cast of 'Sex Education' is endearing and talented, bringing life to a diverse set of roles. Photos from Wikimedia Commons.

It’s hard to believe that a show titled “Sex Education” is one of the best series created by Netflix to date.

The title evokes awkward memories of fifth-grade classrooms and VHS tape videos explaining our bodies, but the show takes a completely different route. Each season of “Sex Education” has successfully covered topics that were poorly incorporated in preceding coming-of-age shows such as sexuality, teen relationships and sexual assault.

The show’s success has translated to critical acclaim, earning a 96% average score on Rotten Tomatoes, and on Sept. 25, Netflix renewed it for a fourth season.

On Sept. 17, Netflix released the third season, which addresses the fallout of several events from season two, including the “sex musical” and Aimee Gibbs’ sexual assault. It’s important that the show does not just abandon plots of the previous seasons, but continues to use them as points of characterization and consequences.

The best part of “Sex Education” is the ensemble cast which is more diverse than other highly-rated shows. People of minority racial groups, sexual orientation and now gender are well-written and represented throughout every episode.

Cal Bowman and Layla, both nonbinary characters who were introduced this season, bring a new level of diversity to the show. Previously, gender identity had not been strongly addressed, but the strict rules that the new headteacher Hope Haddon brings to Moordale Secondary School deliver the opportunity to shed light on issues that nonbinary people face.

Haddon attempts to force Bowman and Layla to fit into strict, gendered uniforms but is generally unsuccessful. In the last episode of the show, a sweet moment happens when  Bowman teaches Layla how to bind their chest, showing the support that the nonbinary community has for one another.

My favorite character from this season by far was Adam Groff, played by Connor Swindells. Groff started season one as a bully toward Milburn and Eric Effiong, but has come so far since then. Adam began dating Effiong in season two, but finally addressed his stunted emotional growth in season three. He opens up to the people around him, confessing his love for all things Kardashian and teaching himself to compete with his Maltipoo, Madam. His transition from closed-off bully to emotionally open himbo is a credit to Swindells’ versatility on the screen.

While “Sex Eduction” does well with some things, the writing surrounding Maeve Wiley and Milburn’s relationship leaves the audience wanting something more exciting. It was clear from the first season that they were meant to get together, but the writers have been playing “will-they-won’t-they” with them. It has gotten to the point where I think that their relationships with Isaac Goodwin and Ruby Matthews are more appealing than the relationship the show wants me to care about. Considering this is my biggest gripe with the show, I’d say the writers are doing well.

If I had to give only one show the title “must watch,” it would be “Sex Education.” It teaches young audience members that sex is a natural part of life in a way that society as a whole isn’t quite comfortable enough for yet. Not only is it important to watch, the experience is more entertaining than most teen television shows I’ve watched in general. Season four of the show will definitely be on my Netflix watch list.