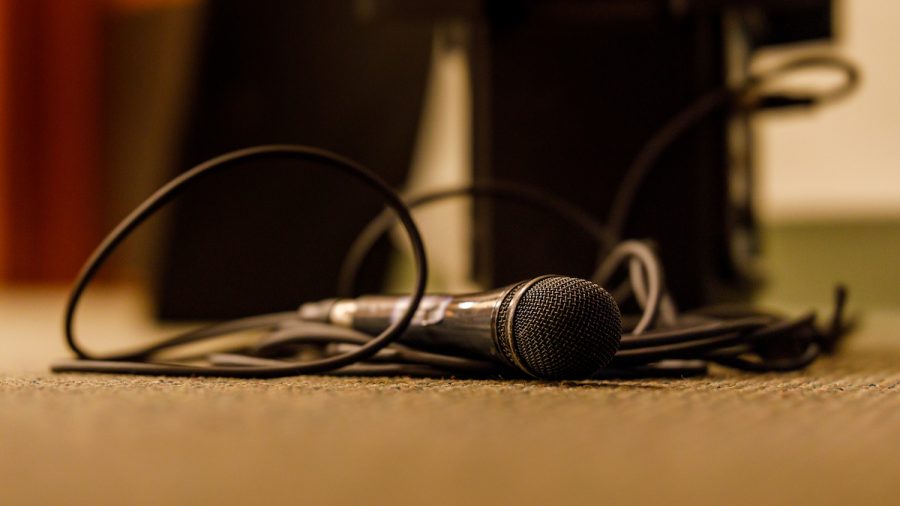 The Multicultural Student Leadership Council and the Student Government Association held the open mic night for students to connect with themselves and others.

Everybody needs some time to vent, to let go of their worries and speak true to themselves. For Quinnipiac University students and faculty, that time came at the Bobcat Culture and Identity Open Mic Night on Sept. 23.

The Multicultural Student Leadership Council (MSLC) and the Student Government Association hosted the event so students from different paths could speak about their life experiences, emotions and the lives of people around them.

Veronica Jacobs, the associate director for multicultural education at Quinnipiac, read her poem “Modern Day Dream,” from her book “The Sun Will Rise Again.” “Modern Day Dream” is about Jacobs’ resilience and hope for change; it’s an ode to the past visionaries, and a cry for a vision of a better future.

Kanayo Umelo, a senior film, television and media arts major, shared a short excerpt from a larger documentary project focusing on “Dr. Winter,” a Black woman who went through Quinnipiac’s medical school while pregnant. Umelo said that this was important for him because “there’s not a lot of opportunities where you get to help another Black person create something.”

While the story focused on one woman, the documentary brings a first-hand account of the lack of minority women in health care and the disparities in medical school. Winter chose her path because of the underrepresentation of Black people in medicine and her own desire to go against that disparity.

“There was a lot of stories that opened my eyes a lot,” Umelo said. “I’m fortunate to have health care and stuff like that, but there’s a whole community of people who are not able to have that.”

Satine Bernsten, a sophomore film, television and media arts major, spoke about the struggles of being a transgender male in a divided and threatening society.

“See, the world is terrifying,” Bernsten said. “I absolutely adore it. And I love people to death, but that doesn’t take away the fact that it was dangerous. I often stay up and think about that a lot. How I love humanity so much, but I’m heartbroken by it.”

Bernsten noted his struggle with anxiety and connects that to the scary reality of living in a world that still “despises” his existence. He revealed that he feels pressured to be the “perfect trans guy” as he holds the ability to change others’ perspectives of transgender people.

Bernsten realizes that getting up on a stage and speaking about your experiences,  suffering through anxiety attacks and “fear and loneliness,” is worth it if you can make a positive change.

“The world is in a constant flux,” Bernsten said.“It twists and turns, but always, always it continues forward. Fight. Fight by living for those kids that are living such happy lives because of us, because of your existence, in a world that doesn’t want you to exist.”

Haktan Ceylan, a senior political science and philosophy major, and Pratibha Thippa, president of the MSLC, presented the piece “ugly” from their collection “The Caged Bird.” Ceylan recited the story of a woman facing domestic violence and abuse, while Thippa performed a Bharatanatyam dance interpretation alongside the poem.

Smooth motions convey the fear, desperation and clarity of “ugly,” as Thippa embodies the simultaneous vulnerability and strength of a woman finding her inner spirit. Verses tumble out as Ceylan trembles with emotion and channels the fervent energy littered throughout the poem.

Spencer Brown, who is autistic, spoke about his experience getting through Quinnipiac as a junior accounting student, and how the COVID-19 pandemic and the overall college experience had taken a toll on his mental health.

He was candid about the drain that the isolation of the early pandemic had on him. This past summer Brown checked into a rehab facility, where he focused on himself and his health. Now that he’s back at school and getting involved with clubs and classes, he’s realized that as long as he puts the work in, his dreams are in reach.

Ambar Pagan, a senior political science major and creator of the event, closed the open mic night with a heartfelt essay she wrote in her first year at Quinnipiac. The essay, originally written about Venezuela, expanded to cover the “universal” freedom everyone wants in light of the Afghanistan refugee and Haitian crises.

“(The essay) says that we’re all different, but we’re all one,” Pagan said. “And I think that really speaks to everything that happens in our daily lives. We’re always going to have diverse interactions, especially today. It may have really gotten some of us out of our comfort zone, but these are definitely moments that are needed because it teaches us so much about each other and it teaches us to value each other.”