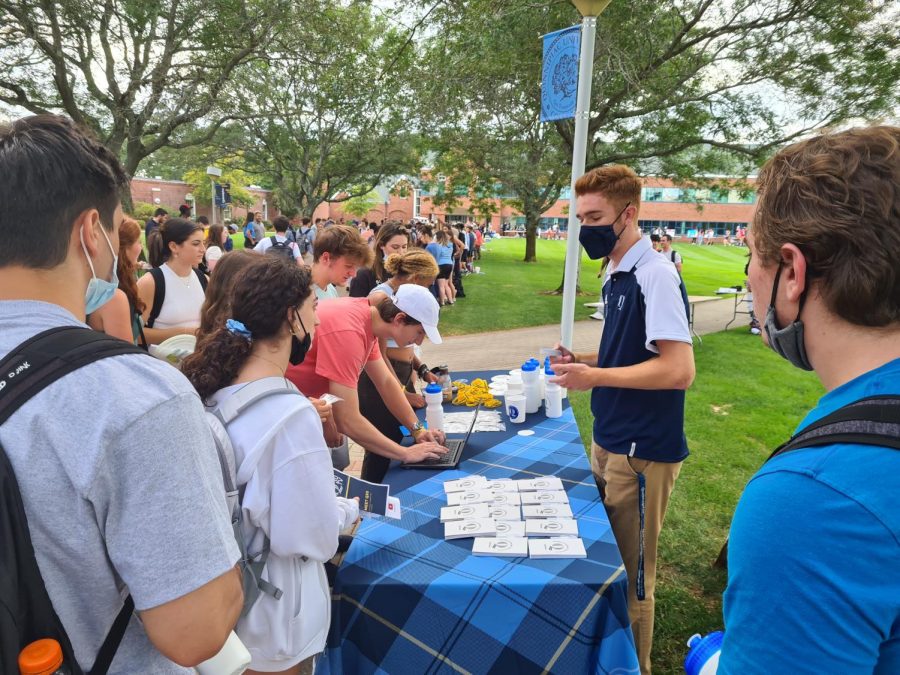 Over 110 organizations took part in this year's involvement fair on Sept. 8.

With a sense of normalcy returning to campus life, the majority of student-run organizations at Quinnipiac University are experiencing an increase in student involvement rates.

Throughout the beginning of the semester, different groups on campus have seen a significant increase in student participation in comparison to previous semesters.

“Last year, we had 109 students sign up for CAP (Community Action Project) when we reset our roster,” said Kevin Surace, a junior health science major and co-director of CAP. “… With regards to attendance, we averaged about 20-25 members at meetings last year, and this year we’ve seen that number nearly double.”

Surace said CAP gained almost 200 members at the university’s involvement fair, an event where all organizations on campus can recruit new members. He said the shift from virtual and socially distanced events to on-ground community service has given students more opportunities to interact with each other and the community on a personal level.

“We’ve also noticed an increase in event attendance registration,” Surace said. “I think that this is because students are excited to go off campus to participate in service events for the first time in two years.”

Despite many organizations reporting a rise in active members, Cranston said there is no clear-cut number of students actively in organizations due to a lack of concrete attendance evidence.

“Sometimes it’s hard to track specific involvement, just because someone can go to a general meeting and not go the next week,” Cranston said.

As a response, Cranston said she will begin requiring organizations for the first time to submit an official roster by the end of October. She said the university should have these numbers by the end of the semester.

While organizations and clubs monitor attendance, some new members described how eager they are to get involved in a physical setting.

Arianna Korb, a first-year undeclared business major, said she felt more confident joining organizations as a freshman after she talked to student leaders in person.

“Over Zoom, I find it hard to connect with the people I’m talking to as well as asking all of my questions,” Korb said. “Being in person made it more comfortable to do that rather than talking through a screen.”

However, some of the university’s organizations are on the opposite end of student participation. Greek life reported lower recruitment numbers this year in comparison to the 2020-21 academic year.

As COVID-19 forced Greek life to transition to a completely online forum last year, Director of Campus Life for Fraternity and Sorority Life Katherine Pezzella said she expected recruitment numbers to be lower than usual.

“Last year when we were having a lot of remote or hybrid options, that’s when we anticipated that numbers would be lower, and in fall 2020, numbers were higher than ever,” Pezzella said. “We had record recruitment across the board last year.”

The decrease in student involvement after in-person events resumed has gone against national trends, she said. With record-breaking recruitment numbers in last year’s fall semester, Quinnipiac Greek life was thought to defy the pandemic odds.

“So, we kind of thought that we were going to miss the drop in interest that people had seen nationally at other schools, and it just seemed that we’re experiencing it a year later,” Pezzella said.

The drop in recruitment numbers in Greek life is primarily in one subset of the sorority community.

This summer there was an increase in student outreach and social media presence from the sorority community compared to previous years, which led to an examination of the low recruitment numbers, Pezzella said.

“We did more information sessions and Instagram lives and emails to all students than we have ever done in the past,” Pezzella said. “So, right now we’re trying to go back and say ‘OK like what happened here. Why are the numbers lower?’ So we’re still kind of in the midst of working that out.”

However, the fraternity community is reporting a jump in numbers that places them into the normal recruiting range.

Hawryluk attributes the increase in registration to the opportunity for more in-person events.

“Maybe people didn’t think they would get as much value back given that there was so many COVID restrictions,” Hawryluk said. “They might’ve thought ‘I’ll consider it next year when things are a little bit more back to normal.’”

Organizations on campus continue to monitor active members and prepare to submit solidified numbers to the university.