The Quinnipiac volleyball team’s season is reaching a pivotal swing. The Bobcats are better than their 3-9 record, but can they be great? 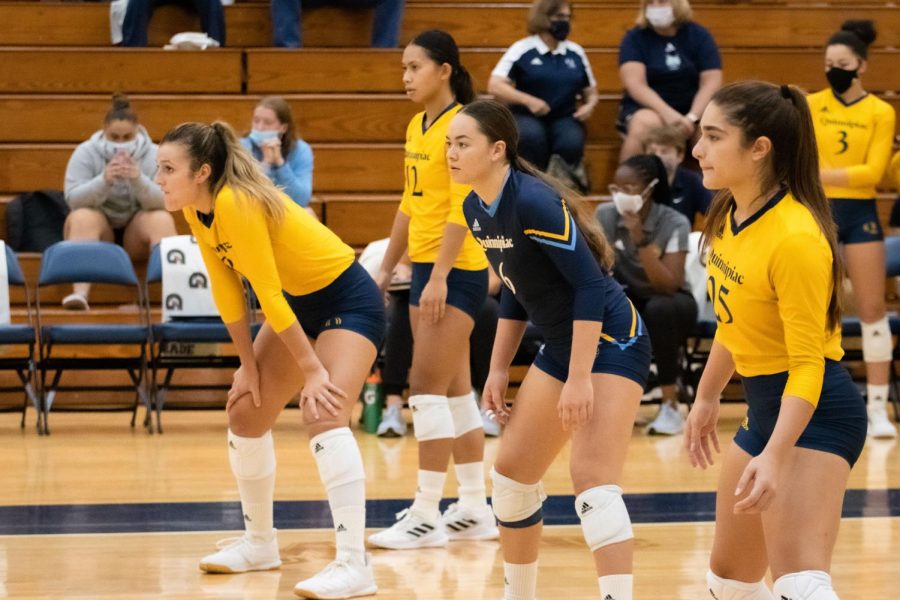 Junior outside hitter Aryanah Diaz had the eighth-most triple-doubles in the NCAA last year with three. Photo from

There’s a beauty to competitive volleyball.

The serve comes soaring in, with every Bobcat laser-focused. Senior outside hitter Olga Zampati extends to bump the ball up. Darting in comes sophomore setter Chloe Ka’ahanui to set the ball up, and, as if it was practice, junior outside hitter Aryanah Diaz launches off the ground to earn a kill for Quinnipiac.

It’s a work of art that Quinnipiac volleyball displays on Burt Kahn Court. The movement and communication between the six players on the court isn’t replicated in other sports. It’s a fairly positionless sport. The team’s website lists Diaz as an “outside hitter,” but frankly, it’s stylistic nonsense.

Diaz floats all around the court, and rightfully so. She’s one of the team’s best players, and high-caliber players should be involved everywhere. The Miami native did it all last year, leading the team in assists (667) and aces (33). Diaz was also second on the team in digs (333), showing her quickness on the defensive end just as much as on the offensive end. Perhaps most impressively, Diaz’s three triple-doubles were the most in the MAAC and the eighth-most in the country.

Despite being tied with senior libero Daniella Balsano as the smallest player on the team, standing at just 5 feet, 4 inches tall, Diaz consistently makes her presence felt on the attack. You could feel the heat of the ball from the stands when she pummeled it down for a kill, a stat in which she ranks just behind senior outside hitter Maggie Baker with 126 compared to Baker’s 137.

But it’s a fluid sport. It’s a team sport. Focusing on just one player is a dishonest representation of the Bobcats.

The aforementioned Baker has improved each year on the attack with her kills-per-set rising throughout each of her first three seasons. Ka’ahanui is the focal point of the offense, with most attacks forming through her. She leads the team in assists with 330, and it’s not even close. Quinnipiac ranks second in the MAAC in assists (520), with Ka’ahanui accounting for 64% of them. Only Fairfield, Rider and Marist have a player that accounts for a higher percentage of its team’s assists. Two of those players are seniors. One is a graduate student. Reminder: Ka’ahanui is a sophomore.

There’s a problem, though. All this talent, all these impressive plays; they aren’t translating into enough wins. The team is currently 3-9 overall and 2-2 in conference play, sitting fifth in MAAC standings.

Yet that doesn’t tell the full story. The Bobcats lost to Rider and Niagara, but both of those teams sit on top of the table. They combine for a 7-1 record in MAAC play. While you need to beat the best to be the best, it’s understandable to drop a match against a tough opponent. The bright side is that Quinnipiac confidently handled Saint Peter’s and Canisius 3-0 and 3-1, respectively.

Wednesday’s match against Marist will be telling. The Red Foxes are 2-2 in conference play, and sit one spot ahead of the Bobcats in the standings. Knocking them down a spot would be a big momentum shift for Quinnipiac after its win over Canisius.

It’s easier said than done. There are no easy wins in Division I play. Just the same, there are glimmers of hope that suggest the best is still to come for Quinnipiac.

A tough stretch of road games await the Bobcats — Marist, Fairfield and Siena — but that’s OK. No team should challenge for the crown without a fight, and the Bobcats are more than prepared to give one.