From Dublin to Dub-land: How international phenom Rebecca Cooke is powering a surging women’s soccer team 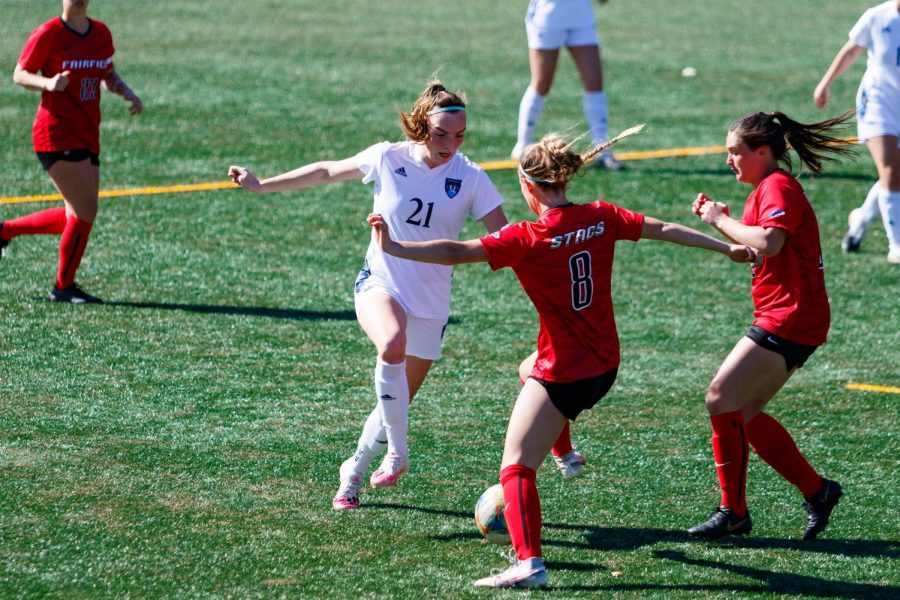 Rebecca Cooke leads the team in goals so far this season with seven. Photo from

Fall sports are off and running this semester at Quinnipiac University, and no team has been more impressive than the women’s soccer team. Starting their season 5-0, the Bobcats have proven that their team improvement is real.

Two-time MAAC Player of the Week recipient Rebecca Cooke can be attributed to the team’s offensive success. As a sophomore, she has a powerful skill set to go along with elite awareness and keen instincts. Currently, the team sits second overall in the MAAC in goals scored per game and leads in opponent goal average through its first seven games. Thus, the team is No. 1 overall in scoring margin, proving that it can play an all-around game on both ends of the field.

It took Cooke a bit longer than expected to reach this level of elite status.

“When I was younger, I never even planned on coming to (the United States),” Cooke said.

Born and raised in Dublin, Ireland, Cooke attended Portmarnock Community School and later played soccer for the Republic of Ireland U17 and U19 women’s national teams. Transitioning to the United States wasn’t as simple as she had hoped.

“I had this idea of studying abroad and experiencing the best of the best,” Cooke said.

But just when she was ready to go, the COVID-19 pandemic made way.

“When COVID hit, I had to defer,” Cooke said. “I think that was the best option for me because it made me realize how much I wanted to come over.”

As any college student can relate, acclimating to a new environment can be a tough transition. Cooke did it as a Division I athlete in a new country.

“Coming here, the biggest jump was the physicality and athleticism of other players,” Cooke said. “It seemed natural that the players over here would be faster, stronger.”

Cooke admitted that it took some time to get acquainted with a new style of game.

“I miss playing at home, but it is more professional here,” Cooke said.

Fortunately, there was someone she could go to. Quinnipiac women’s soccer head coach Dave Clarke, the winningest coach in Quinnipiac soccer history and a member of the Irish American Soccer Hall of Fame, knew precisely what she was going through.

“It’s really easy because he’s a lot like the other coaches I’ve had,” Cooke said. “A lot of times, I just got what he’s saying. He never needs to explain it.”

As for the Bobcats, they are playing with professionalism, and with that comes improvement.

“We’ve built off the spring because the team hasn’t changed much,” Cooke said. “We had a good preseason and had a lot of time playing together, and now I don’t have to worry about what other players are gonna do because we’ve built a great team relationship.”

As one of the premier forwards in the MAAC, it would be natural for Cooke to feel that she has some expectation to perform well. But Cooke doesn’t see it that way.

“I don’t feel pressure, but I definitely feel something,” Cooke said. “But I don’t let that affect me. At the end of the day, I don’t mind how I play, as long as we win.”

Cooke’s teammates play a significant role in her personal and team success. Even with 31 players on the roster, it’s hard not to get lost in the camaraderie in the hopes of doing something special. This year’s team is a close group that supports every member of the team.

“When we came back against Fairfield last year, there was a large crowd cheering, but the only cheers any of us could hear were coming from the bench,” Cooke said.

Cooke, a sophomore coming into this season, surpassed her goal tally of four from last year in Quinnipiac’s third game, as she collected a hat trick against Maine on Sept. 5. Cooke is currently among the top-5 in nearly every offensive category in the MAAC: second in goals, second in points, fifth in shots, second in shots per game and leading the MAAC in goals per game.

“She’s very much a maverick out there,” Clarke said. “She just does things that you can’t explain.”

Cooke is known around the league as a static player, meaning she sticks to her game and does so effectively. Part of her game involves movement and positioning.

“She’s always moving,” Clarke said. “We use GPS tracking, and it shows us that she’s moving an (average) of 8-10 miles per game.”

An NBC Sports statistic revealed that an average Premier League player travels between 7 and 9.5 miles per game, to put that number into context. At this rate, Cooke could have the physique to compete with the best of the best.

As well as she is performing, the coaching staff knows that there is more skill to be unleashed.

“She’s still capable of more,” Clarke said. “The end goal is to make her a better player than she already is.”