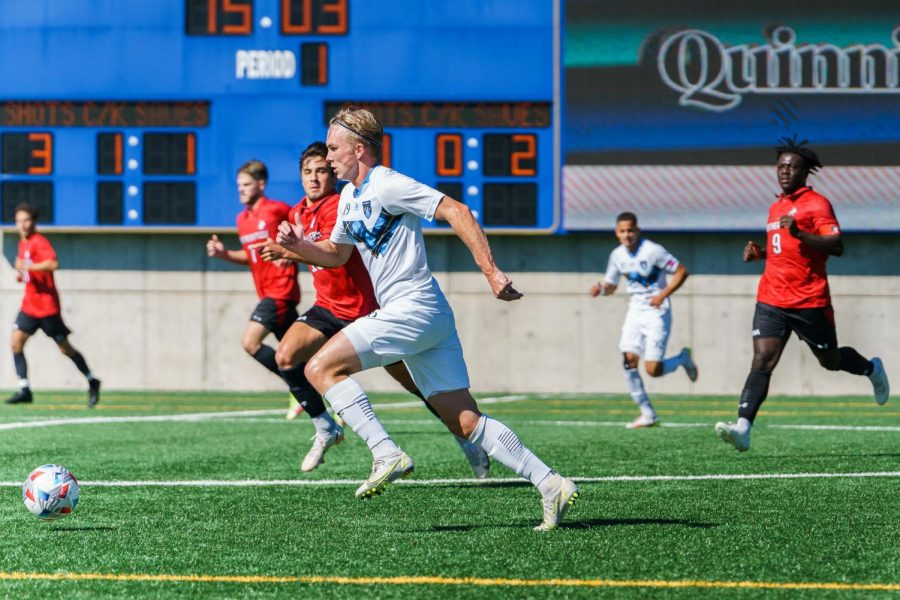 The formerly undefeated Bobcats will now begin MAAC play with a 5-2 record.

The Quinnipiac men’s soccer team dropped its second straight match on Saturday in a slugfest against the Northeastern Huskies, losing 3-2 in overtime. The match marked an end to Quinnipiac’s non-conference schedule, going a MAAC-best 5-2 against non-conference opponents.

Looking to respond after their 5-0 loss to No. 9 New Hampshire on Tuesday, the Bobcats wanted to come out with a level of intensity that could help them compete with a very tough Northeastern squad. The Huskies entered the game owning the best record in the Colonial Athletic Association at 6-1-1. This would also be the first time both teams played each other in 14 years, with their last meeting being a 2-0 Quinnipiac victory on Sept. 1, 2007.

“We had a really good, intense training session (on Friday), and the boys had a great response yesterday,” Quinnipiac men’s soccer head coach Eric Da Costa said. “We knew what we were going to get today. The game started like that right away, and the boys matched it.”

That intensity wasn’t too apparent at the start, as three Quinnipiac fouls in the first six minutes gave the Huskies a great opportunity in their offensive zone, forcing Bobcat sophomore goaltender Antreas Hadjigavriel to make an excellent save to keep the match scoreless early in the contest.

Several minutes later, Northeastern would get its chance to put the ball in the back of the Quinnipiac net. Husky senior forward Dan Munch exploited the Bobcat defense’s awkward positioning to score his first goal of the season at the 13:20 mark, assisted by senior midfielder Jacob Marin-Thomson.

The Northeastern defense would make a response from Quinnipiac very difficult, as their stingy defense did not let the Bobcats take a single shot until the 19:48 mark. However, Quinnipiac would eventually break through the Huskies’ defense when senior midfielder Alex Holle scored his first goal of the season for the Bobcats at the 23:37 mark, assisted by junior forward Brage Aasen.

Before the Bobcats could even comprehend their own small victory, Husky senior forward Benjamin Klingen immediately took the ensuing kickoff down into the Quinnipiac end of the field and scored his second goal of the season at the 25:28 mark, exposing the Bobcats while completely unassisted.

Every so often, the game would return to the physical, competitive battle it was billed as with both sides battling in each other’s ends, looking for, but not finding any major scoring chances.

The Bobcats, however, would not have to look too hard to find one when at the 37:23 mark, a magnificent feed from senior defenseman Jordon Bennett reached junior forward David Bercedo, who was then able to put the ball away to score his second goal of the season and tie the game at two.

“I think he picked out some pretty good passes,” Da Costa said. “We probably could have done more with that, to be honest. Jordon picks out a good pass, he’s able to see it early, He’s able to deliver a good, quality ball into a good spot, and when you have some players like (freshman forward) Sam (McCann) and David and some other guys like Holle popping into the box, then you’re going to get some chances.”

The match remained tied going into halftime as both defenses settled down. After halftime, the game transitioned from a high-scoring affair to a tough and mighty defensive dogfight.

The next 45 minutes was filled with back-and-forth shots from both squads. Each side consistently fought their way up the field to create a scoring opportunity, but were unable to convert.

The goalkeeping also began to shine through with both sides’ goalkeepers making great saves to keep their teams in the game. The most prolific save came from Hadjigavriel at the 56:23 mark. With the Huskies charging deep into the Quinnipiac zone, sophomore forward Federico Tellez launched a rocket toward the top right of the goal. Before the damage could be done, Hadjigavriel dove left, punched the ball out of bounds, and left a real scoring threat from the Huskies dead on arrival.

The intense competitiveness on the field began to excite the rowdy crowd of 316 people at the Quinnipiac Soccer & Lacrosse Stadium. The combined crowd of Quinnipiac students, parents and children from the Hamden Soccer Association, who were honored during halftime of the contest, created a choir of chants that serenaded the players below them and increased the Bobcats’ home-field advantage.

Through the crowd noise, neither side was able to break through during the second half, and with the match still tied at two goals apiece, it was forced to enter a sudden-death overtime, the first for the Bobcats this season.

Although there had still been hope, the overtime would not last long for Quinnipiac. At the 93:10 mark, a combo of passes from Northeastern redshirt junior forward Timothy Ennin and Marin-Thomson set up a perfect shot for Klingen, who scored the game-winner, his second goal of the match.

Beneath the surface of a tightly contested match played between two competitive teams was a game that possessed a fair amount of sloppy play and questionable officiating. Over the match’s 93 minutes, the officials called a combined 40 fouls and issued three yellow cards, much to Da Costa’s dismay.

“I think it affected both teams,” Da Costa said. “Without criticizing the officials, it wasn’t that type of game. For both teams, it just takes the rhythm away … It got a lot uglier than we needed it to be but that being said, I think both teams handled it well.”

The Bobcats will now try to bounce back from its two consecutive losses by looking forward to the start of conference play on Wednesday when they play at home against the Siena Saints at 3 p.m. Northeastern will now try to maintain its current momentum for when they travel south to play the UNC-Wilmington Seahawks next Saturday at 7 p.m.

Despite the loss, Da Costa was encouraged by the growth of his squad, and is looking forward to seeing how his team progresses when they enter MAAC play.

“I think it was great that we had the type of team that we played today, that just came after us,” Da Costa said. “I think we needed that. At the end of the day, we go into tomorrow 0-0-0 and every single team in the league is the same as us, regardless of what their non-conference schedule looked like… If you told us before the season started that we would be 5-2 heading into our conference slate, I think we’d be okay with that.”