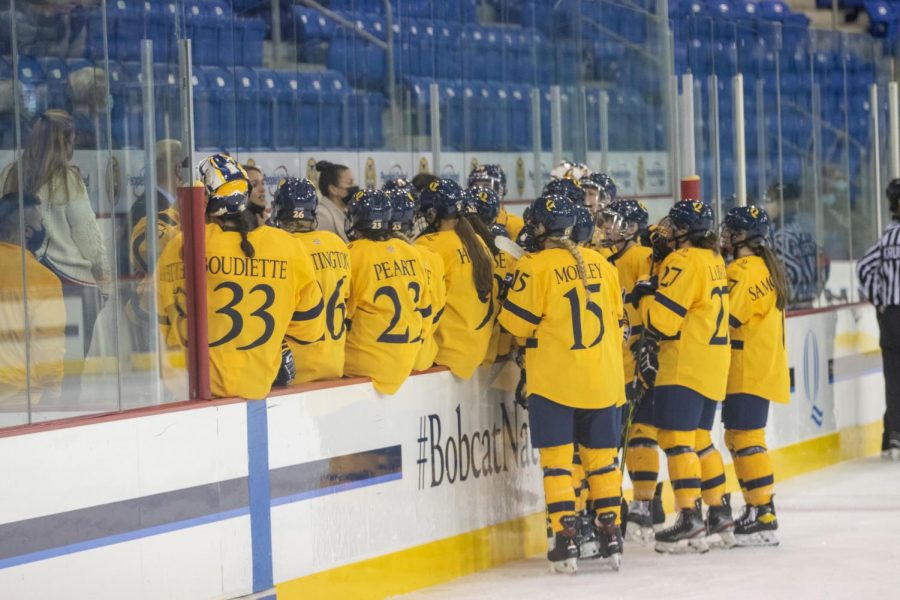 Fresh off of a 3-2 season-opening win over Maine Friday night, the Quinnipiac women’s hockey team came into Saturday’s game at the People’s United Center and completed the weekend sweep of the Black Bears by a score of 5-1.

The Bobcats were slow out of the gate, making sloppy passes and allowing a number of turnovers. This translated onto the scoreboard, as Maine led 1-0 after the first period after senior center Celine Tedenby burned the defense to the left side, putting the puck off the right post before collecting her own shot for the goal.

But hockey is a game of momentum, and six minutes into the second period, that momentum swung drastically. A bouncing rebound in front of the Quinnipiac net careened off of the stick of Maine graduate student center Maddie Giordano with the left side of the net wide open, leading to a chance for the Bobcats on the other end, as junior center Alexa Hoskin cut down the left wing and laid a shot five-hole to even the score.

Just under five minutes later, graduate student winger Taylor House found the back of the net on a feed from senior center Lexie Adzija from below the goal line. It was the first goal of the season for House, who was tied for the team lead in goals during the 2020-21 campaign.

“I think that any time you score it’s a confidence booster, but getting that out of the way in the first weekend is huge,” House said. “Our line’s been building chemistry over these last few games, and I think it’s really shown.”

That would not be the end of the scoring for the Bobcats in the second period. In the waning minutes, a Maine turnover at its defensive blue line caused by junior winger Sadie Peart eventually led to her first goal of the season after sophomore defenseman Maddy Samoskevich found her open in the slot.

Quinnipiac outshot the Black Bears 17-13 in the second period, and that dominance on the offensive end would translate into the third, as sophomore winger Nina Steigauf caught a pass in the slot and rifled a shot bar to bar for her second goal in as many games, already matching her total from last season.

“Nina is a goal scorer,” Quinnipiac women’s ice hockey head coach Cass Turner said following the win. “I think the makeup of their line is proving to be exactly what we hoped it would be. So I think for Nina, she’s got two people who you’ve seen in the past few days that have been able to give her the puck and she’s finished, and I think sometimes that takes a bit of time. She was a goalscorer before she got to Quinnipiac, and I think that last year she just didn’t have that confidence to make those plays.”

Five minutes after Steigauf’s goal, Maine put the puck in the net for the second time in the afternoon. Unfortunately for them, the net they put the puck in was their own.

Having pulled the goalie on a delayed penalty, the Black Bears were moving the puck around in the offensive zone trying to create a scoring opportunity, when a pass meant for the defensemen at the blue line soared between both of them and flew down the center of the ice all the way into the empty net at the other end, giving the Bobcats a four-goal advantage.

Graduate student goalie Corinne Schroeder was the last person to touch the puck, having deflected it to the corner on Maine’s last shot, so that play resulted in her scoring her first collegiate goal, becoming the the second-ever Quinnipiac goaltender to score, and the first since men’s ice hockey goalie Michael Garteig was credited with a goal in 2013.

“I still can’t believe it,” Schroeder said. “I was very surprised when I saw my name on the board. I had no idea that it even could’ve been me. They got at least one or maybe two shots off and then they were trying to make it up to the defense, and they missed and did not skate hard to get it. They did it to themselves.”

Players on the bench were equally as stunned. “We were all just really excited,” House said. “We didn’t even know who to give it to, but the ref asked me, and she made a save so she was the last one to touch it, so it’s hers.”

While opening the season with a series sweep was a confidence booster for the team, Turner said that they still have a lot to work on.

“In areas of our game, it’s clearly the beginning of the season, and I just think we’re so fragile and not there yet,” Turner said. “I know our team feels that, and I think we’re just scratching the surface of what this team can do right now, and we can be a lot more disciplined than we were.”

The Bobcats’ homestand continues next weekend where they’ll face off against the Sharks of Long Island University (LIU) in a two-game series. LIU is 0-2 on the season so far after suffering 3-1 and 2-0 losses to UConn this weekend.