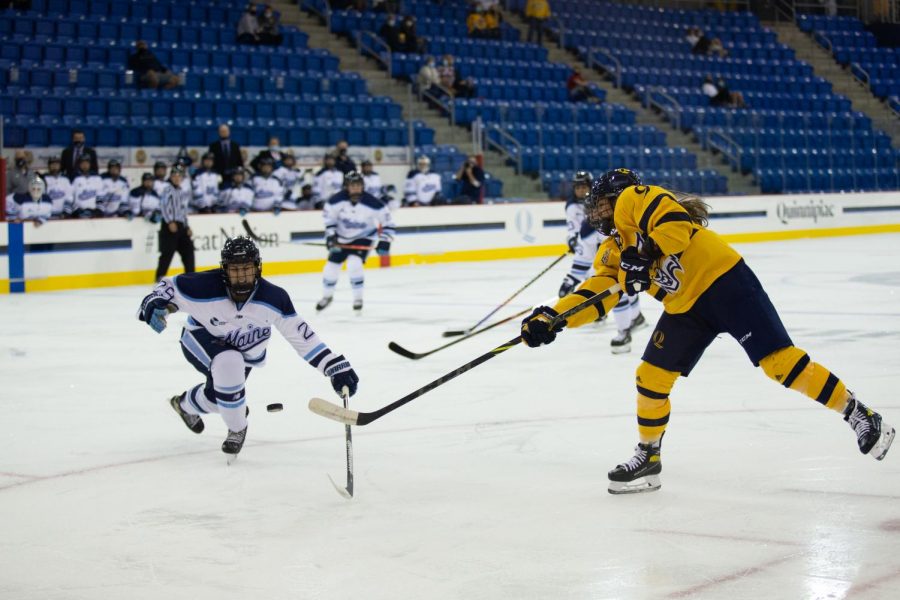 Junior forward Alexa Hoskin was one of three goalscorers in Quinnipiac's 3-2 win over Maine.

Hockey is back in Hamden. The Quinnipiac women’s ice hockey team hosted Maine Friday night. This was the first home game with fans in attendance since Feb. 22, 2020. The Bobcats came out victorious, beating the Black Bears 3-2.

Quinnipiac got off to a hot start, scoring 58 seconds into the game. Steigauf finished the pretty tic-tac-toe setup to make it 1-0 immediately.

“Scoring first is incredibly important,” Quinnipiac women’s ice hockey head coach Cass Turner said. “It gives you that momentum and jump, but how you respond to that is even bigger.”

The Bobcats responded after its first score with aggressive play throughout the first period although it did not have any more goals to show for it.

The Bobcats did more than just attack, Quinnipiac also defended immaculately. The Bobcats held the Black Bears to zero shots through the first 17 minutes of the game, aided by defensive zone pressure, effective backchecking and four blocked shots.

The Black Bears came out of hibernation hungry in the second, looking to even up the score. That is just what they did. Tedenby floated one from a tough angle near the goal line and put it in the twine to make it a 1-1 game.

Then, Quinnipiac found new light and capitalized on a juicy rebound opportunity to make it a 2-1 game. Hoskin scored the goal, but the chance came after Maine graduate student goaltender Loryn Porter made two miraculous sprawling saves. To make things even sweeter heading into the third period, Vorster put it home to make it 3-1. Vorster could not have done it if not for a spectacular spin-o-rama assist by senior linemate Lexie Adzija.

After two periods of play, the Black Bears found themselves down two and losing any momentum due to the shot clock reading 27-12 in favor of the Bobcats. While some fans thought they were out of it, with eight minutes remaining, Giordano found open space in the neutral zone, cut through two defenders and sniped one from the point to cut the deficit in half. That was not enough for Maine to complete its comeback as Quinnipiac held on to what can certainly be considered a nail-biter.

The Bobcats did a lot effectively in this game,the most impressive being their forechecking and relentlessness in the offensive zone, forcing many turnovers and creating opportunities for themselves.

“(Forechecking) was an emphasis this week,” Turner said. “I still think we need to create more dangerous chances, though.”

In the end, this will be considered “just a game.” However, for the players and coaching staff, Friday night was something special. After being disconnected from spectators for 580 days, the team and its coaches were happy to be back to normal.

“It is everything,” Turner said. “That sense of support and normalcy, it is a true hockey experience. It feels good for (fans) as it does for us.”

The Bobcats will reintroduce themselves to Maine again tomorrow for what should be another exciting matchup. After almost losing their late and sustained lead, the Bobcats look to use this game as an opportunity to grow.

“We learned that every team is going to play until the last buzzer,” Quinnipiac’s initial scorer Steigauf said. “We have to do the same and bring energy into every shift.”