‘This is five years in the making’: Quinnipiac women’s soccer poised for historic season 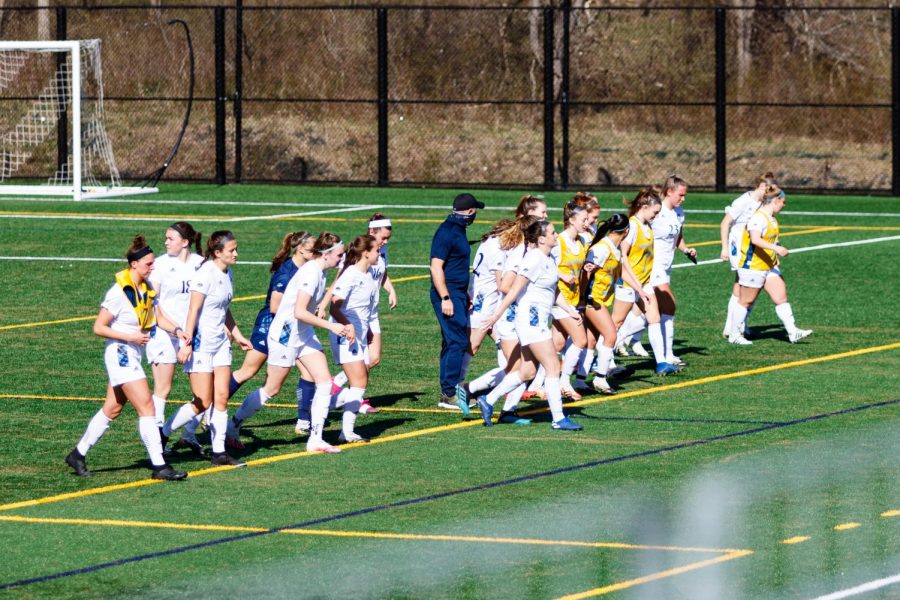 The Quinnipiac women's soccer team has started the 2021 season 5-1.

The Quinnipiac women’s soccer team has started the 2021 season 5-1.

That sentence is a story in itself, but there’s plenty more to see when looking beyond the win and loss columns.

The women’s soccer team has been mired in a stage that some sports fans deem one of the worst forms of purgatory. The team has been good — Quinnipiac women’s soccer head coach Dave Clarke holds a 62-61-18 record since joining the MAAC in 2013, and those numbers aren’t indicative of how well the team has played in recent years. That overall record is largely skewed due to 3-8-5 and 3-13-1 finishes in 2013 and 2014, respectively.

Despite the fact that the Bobcats have had much better seasons since those two years, the team hasn’t been quite good enough to be championship contenders.

The Bobcats have been to one MAAC championship game since they joined the conference, and couldn’t pull off a victory against the Monmouth Hawks. Since that game in 2016, the Bobcats have struggled to escape the clutches of the MAAC semifinal round, having lost in the final-four game three times in the last five seasons.

However, the team has been trending up for a long time and is ready to explode, as Clarke said.

“This is five years in the making,” Clarke said about this year’s team.

From top to bottom, underclassmen to upperclassmen, the 2021 squad is a mark of precision. Two essential parts of this team, sophomore forward/midfielder Rebecca Cooke and senior midfielder Selena Salas, are examples of how the coaching staff has molded this team.

Cooke was Quinnipiac’s leading scorer last year, scoring four goals in seven games. She’s already sailed past that figure with seven goals in six games this year. Cooke is important to the team not only because of her prolific goal scoring ability but also because of her versatility.

“She’s very tactical on the ball, so she can play those long balls forward,” junior goalkeeper Megahan Phillips said. “And she’s even a great recovery run player, so she’ll go up and come all the way back, which is something that we need.”

Cooke serves as the engine of the team, facilitating ball movement through the middle of the field. She can also sit at the top of the formation and use her ball-handling skills to score the amount of goals that won her a MAAC Rookie of the Year Award in 2020.
This means two things for Quinnipiac. First, it’s injury support. Cooke primarily played as a forward as a freshman, but should the Bobcats find themselves thin at midfield as the season churns on, she can provide a vital boost.

“The reality is that the teams that stay healthy for the most part and are fresh will win,” Clarke said.

Cooke’s ability to play anywhere affords the Bobcats the option to do some shuffling with their lineup if players were to go down. Any team would jump at the opportunity to slide a starting-caliber player to another position without that player’s productivity falling.

Scheme fit is also a part of the decision that goes into roster makeup. Salas, an attacking midfielder, fits perfectly alongside Cooke. Slot Cooke back into the central midfield, and her long-ball ability opens up new possibilities for Salas. Put Cooke up top, and not only does it give Salas a partner-in-crime in the middle of the field, but it also diverts attention from the opponent’s center backs. The extra space that attention creates is an invitation to wreak all kinds of havoc.

It’s the classic strategy in sports: put the defense in a bind. Make them choose how they get beaten. If the defense tries to take away Cooke, Quinnipiac’s most productive player, Salas and others is right behind ready to take advantage.

“Rebecca’s strength is not her ability, it’s her movement, and that’s harder to scout,” Clarke said. “That’s harder to negate. But if you stop Rebecca, it frees up (junior forward) Paige (Laberge) and Salas.”

The pairing ending up together was no accident. These two are on this roster for a reason, as can be said about several other players on the team.

“They’re all national team players and high-level players that we just happen to have together at the same time, but it wasn’t just by chance,” Clarke said.

It’s easy for most to view the signing/transfer window as a year-to-year event. One might think that teams approach signings with the intent to go out there and sign the best player available, then do it again the next year.

But careful consideration goes into how coaches construct rosters, and the 2021 Bobcats are evidence of that. Having players that are complements of each other turns a talented team into a team capable of threatening for a MAAC title.

The Bobcats have played exactly like that. Undefeated to start the season until Sept. 19, the Bobcats are playing with a chip on their shoulder. They entered the year ranked as the No. 2 team in the MAAC in the Preseason Coaches’ Poll.

It’s important to remember that the Bobcats have yet to play any MAAC teams, as all its games so far have come outside the conference. Teams like Monmouth and Siena, selected as the first and third best teams in the conference, respectively, have gathered intel on the Bobcats over the years.

These teams know what the Bobcats are looking to do on the pitch, and are thus better prepared for when game day rolls around. Monmouth, Quinnipiac’s rival on the soccer pitch, has had the Bobcats’ number. The Hawks knocked the Bobcats out of the playoffs last year in the semifinals, a stinging upset, as No. 3 Monmouth pulled off the 2-0 victory against No. 2 Quinnipiac.

Yet, this year feels different. The upperclassmen group of Phillips, Salas and junior midfielder Markela Bejleri, among others, is still performing at its peak while the young group of Cooke, sophomore forward Courtney Chochol and sophomore/midfielder Olivia Kudrikow is on the rise.

And given the Bobcats’ success so far this year, lots of teams will be visiting Hamden with the mindset that in order to be the best, you have to beat the best.

“We do have that target on our back,” Phillips said. “People do want to beat us, they do want to score on us. So we’ve just got to keep playing how we’re playing.”