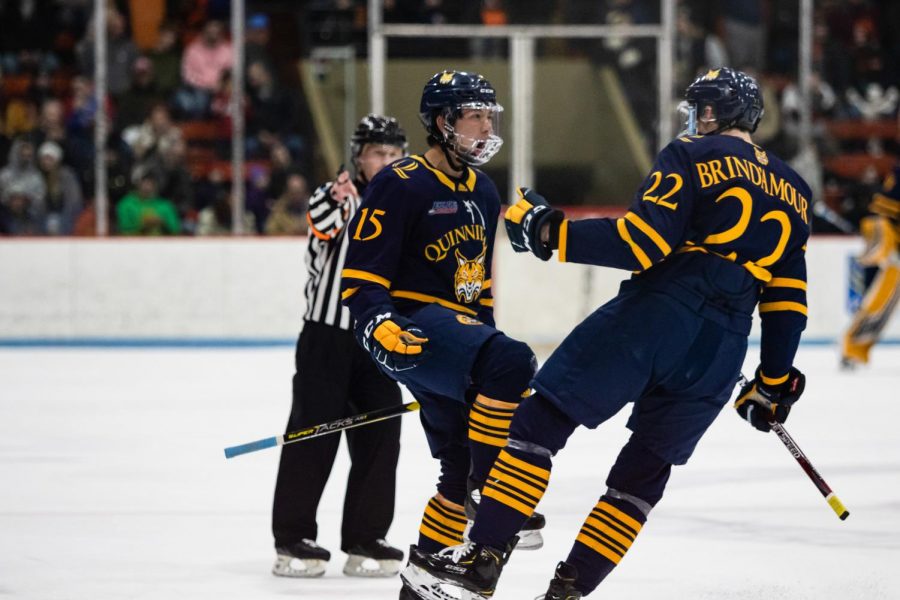 The Quinnipiac men's ice hockey team will play three nationally-ranked out-of-conference teams within its first 12 games of the season.

Strength of schedule is a fairly useful element to consider when examining a given team’s performance throughout the course of a season. The tougher the opponents are, and the better you do against them, the stronger your team becomes.

A difficult schedule gives teams opportunities to develop from playing tougher teams to help finish with a successful season. In that case, it makes sense to challenge your team frequently and allow them to handle growing pains.

That’s exactly the mindset Quinnipiac men’s ice hockey head coach Rand Pecknold used for this year’s non-conference schedule.
Having all of the ECAC Hockey teams back this season, rather than just the three (Clarkson, Colgate and St. Lawrence) from the previous season is enough competition for Quinnipiac. But following a year where Pecknold and his team had higher aspirations than a day one regional round bow-out, he planned for his team to face off against higher caliber schools.

With the roster adjustments and uncertainty around the strength of the ECAC Hockey conference, my prediction for Quinnipiac is a 13-6-3 record, finishing within the top three in the conference. As for the remainder of the schedule, the Bobcats have 14 non-conference games, including four tournament-style games.

Among those games are No. 5 North Dakota, No. 6 Boston College, No. 15 AIC, Northeastern (who received top-20 USCHO poll votes), UConn (who also received votes), and Arizona State, who Quinnipiac beat in the regional round of the 2018-19 NCAA playoffs.
Adding to that, eight of these games occur within the first 12 games of the season. And in between those games, Quinnipiac heads to Yale for the return of the Battle of Whitney Avenue.

It’s going to be a grueling season for every team in the ECAC Hockey conference, and Quinnipiac did an excellent job of setting itself up for success. Whether or not they succeed will be determined throughout the season.

Overall, the expectation is for Quinnipiac to maintain a fringe top-10 ranking heading into conference playoffs. To do so, the Bobcats will need to maintain an 8-4-2 non-conference record, splitting wins in the Ice Breaker Tournament, then with North Dakota and later on with Arizona State.

This record is definitely doable for a school that intends on competing for a national championship, and if that’s the case, then Quinnipiac needs to deliver. It’s a quick start and a lot of ground can be solidified or lost within those eight games.

Going back to the ECAC Hockey section of the schedule, Quinnipiac needs to make a statement. It cannot lose games to opponents that it’s expected to beat up on. The Bobcats have a history of not showing up in games they think should be handed to them.

Expectedly, Quinnipiac will split games with Clarkson, Cornell, Yale and Harvard. This is not due to Quinnipiac’s shortcomings but more so in anticipation of the strength of these opposing schools. Harvard is especially tough, since it is loaded with an outstanding freshman class.

If Quinnipiac builds on the success of its freshmen players and recaptures that ability to be hot right out of gates when that first puck drop happens, this team will be elite.

Establishing a relentless forecheck should be the identity of this team. Too many times over the last three seasons, Quinnipiac was invisible in the opening period. When the Bobcats show up to play and don’t allow their opponents to breathe on the breakout, they are one of the best teams in the nation.

The Bobcats exhibited how effective their play is when they swarm the opposition in the offensive end when they faced Minnesota State in the 2021 NCAA regional round. Quinnipiac took a 2-0 lead in the first because of that style of play.

Finding that balance of play will be the key to their success against top-tier opponents.