The ‘Manifest’ finale and predictions for the final season

This show is so good, time stopped for five and a half years 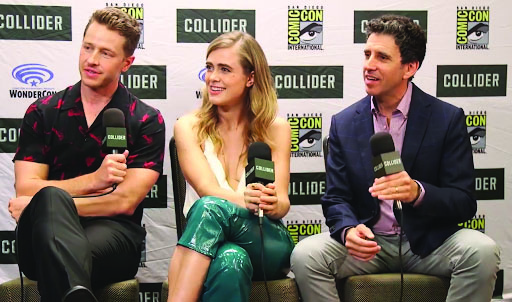 In June, all three seasons of the hit show “Manifest” were added to Netflix. The third season was the most shocking yet, leaving even more questions unanswered than its previous counterparts.

“Manifest” follows a group of plane passengers who were presumed dead for five and a half years after their flight disappeared. The show primarily follows the story of Ben Stone and his sister Michaela, as well as their circle of friends and family, and their struggle to adjust to their new reality. As time goes on, they realize that all the passengers have supernatural abilities and receive visions about tasks that they are destined to perform. They refer to these as “callings.”

Seasons one and two set the tone for how everyone would make up for lost time. It also demonstrated just how intense their supernatural abilities could be. Season three moves beyond the private sphere, as the government is now fully involved with studying scientific explanations for the passage of time and the passengers’ return.

The best moment of season three:

I absolutely loved the meth dealers’ storyline from episodes two to six and the way that their redemption was connected. Olive Stone, Ben’s daughter, is finally falling into a helpful role in all of this. The callings’ connections to biblical scripture, ancient Egypt and old folktales make everything seem more realistic rather than outlandishly supernatural.

The re-spark in the Michaela, Zeke Landon and Jared Vasquez love triangle was just what I needed to get through this season. Viewers watched Michaela come home to her boyfriend of 12 years, Jared, married to her best friend Lourdes. They ended up cheating together and since then, Jared has continued to believe Michaela is his soul mate. All the while, Michaela chose to get married to Zeke, who also came back from the dead but did so on a mountain after getting hypothermia.

I adored the addition of Tarik in episode two, Grace’s brother with who she has a bad past. Michaela and Zeke stepping up as Beverley’s caretakers in episode three brought the turmoil from season one full circle. Beverley is the mother of Michaela’s late best friend Evie, who she killed in a drunk driving accident. Beverly suffers from dementia, so she constantly forgets her daughter and husband have died, and that Michaela isn’t with Jared anymore.

Evangelical 828 passenger Angelina Meyer was the worst new character to join the show. Not only do I hate her for stabbing Grace Stone, Ben’s wife, to death in the finale, but her whiny attitude and creepy attachment to the Stones made her unlikable. Her love story with Pete Baylor, one of the meth dealers, felt out of the blue and rushed. I don’t understand why Michaela would have been called to rescue Angelina from her parent’s prison if her destiny was to kidnap Michaela’s niece baby Eden and murder her sister-in-law Grace.

After public uproar followed its cancellation by NBC on June 14 “Manifest” was renewed for a fourth and final 20-episode season by Netflix. Thankfully, the bulk of series regulars signed on to join the cast. It was announced recently that Matt Long, who plays Zeke Landon, would in fact return for season four. There was confusion after Long signed on to NBC’s “Getaway” after “Manifest” was initially canceled by NBC.

Hate on me all you want, but I will take to my grave that Michaela and Jared belong together. Beverly said it herself to Zeke, albeit she was just channeling Zeke’s thoughts.

“She thought you would die in a day,” Beverly said. “Doesn’t hold a candle to 12 years of being together.”

The romantic chemistry between them is still palpable, even though Michaela is married and Jared has seemingly moved on. And as we saw Jared cheat on his then-wife Lourdes with Michaela best friend upon the plane’s return, I think Zeke’s doubts in his marriage are setting us up for a Lourdes 2.0, and I’m completely here for it.

Moving on, Grace is definitely dead. I don’t see her character’s resurrection fitting into the progression of the storylines. Additionally, Athena Karkanis, who plays Grace, has not signed on for season four. I think Grace has been Ben’s rock and only source of sanity. Think about all the times where he threw off those glasses, grasped his temple and bowed his head. Grace picked him up every time.

The most heartbreaking part too is how many struggles they have overcome as a couple because of the whole 828 thing. Just this season, we saw Ben fall off the rails and Grace questioned if she could handle it anymore. With some support from Michaela, she assured herself that she could do it because a couple of bad years is nothing compared to a lifetime with her husband and children.

That is what broke viewers’ hearts about their consistent marital struggles and her ultimate death. Ben has been so focused on him and his family member’s impending death date that he couldn’t live in the present. He was so concerned with not being around in a few years, that he didn’t realize he could lose his wife so easily. For this reason, I predict he’ll blame himself for her death and fall into chaos. With Eagan’s mob forming against him, it’s likely that Ben will be on high alert to protect his family, possibly even ready to commit murder.

In the last five minutes of the final episode, we saw that Cal had returned back home after disappearing via black lightning at Eureka, but he’s significantly older. My theory here is that in returning to an abyss to prove that the tailfin needed to be back in the ocean, Cal was rewarded by defeating his death date early. He kept saying that he knew what he had to do, with tears welling in his eyes. Maybe there’s a chance that he knew his mother had to die for the greater good, and that’s why he peacefully stayed by her as she passed instead of frantically trying to save her life or call for help. He was also the one responsible for Angelina, his mother’s murderer and sister’s captor, sticking around in the first place. I predict he’s aged the five and a half years he’s been missing, plus the two years since they’ve returned and will not have callings anymore. Maybe he’ll develop some special skills like Zeke’s empathic powers.

In terms of the greater plot, I imagine we’ll get more information about the Noah’s Ark parallel and hopefully get answers to how a lot of things have become what they are. Why has Cal always had such a strong connection to the supernatural? How has Ben become the natural leader of 828? How are they going to defeat their death date? Also, what the hell happened with Pilot Daley in the finale?

I cannot wait until season four is released. I’ve been watching it since it debuted in 2018, and this show is a huge part of my life.

Normally, I dislike media that leaves questions unanswered. I don’t like having to draw my own conclusions about how a story has ended. However, “Manifest” masters this art by layering and intertwining a number of storylines. Just as one plot point reaches resolution, it joins an opposite trajectory that keeps you on the edge of your seat for every episode.

Another part of what makes this show so popular is its uniqueness. The plot and its supernatural nuances make this show so very strange, but the modern New York City setting and humane acting make it feel raw and real. All the actors are consumed by their characters, never failing to add slight movements or quick looks that reveal their underlying thoughts and emotions. Although as a viewer, character decisions can be frustrating, every choice and reaction makes perfect sense once you’ve placed yourself in the scene.

It’s just good TV wrapped up in a confusing bow.