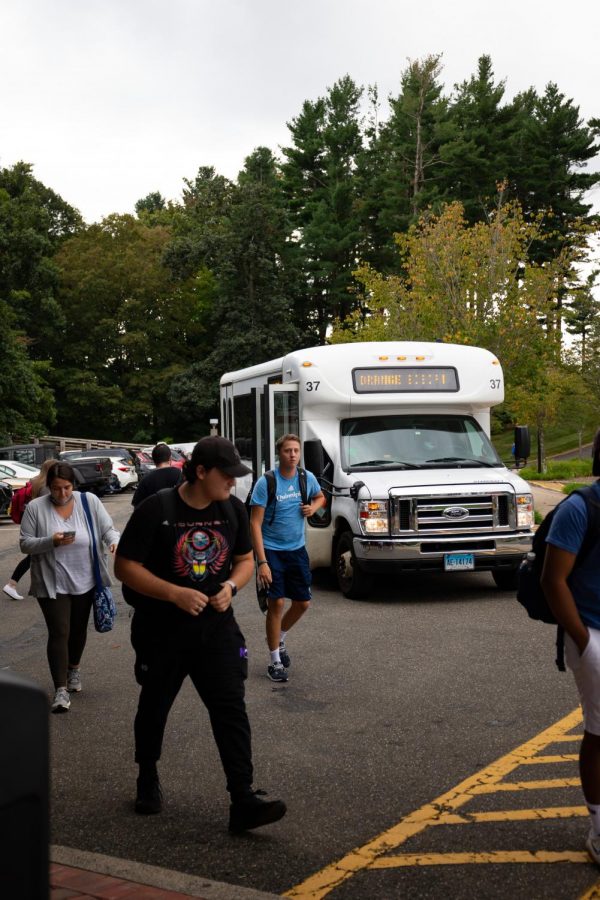 Students walk out of a shuttle that runs between Mount Carmel and York Hill campuses.

Quinnipiac University’s shuttle to New Haven remains out of service, despite the resumption of the loop to Hamden and North Haven on weekends.

“I’m definitely upset about it because it was a way for students to get out and to enjoy their college years, enjoy dinners with friends, or even someone like me who doesn’t drive to get to the train station,” said Jayda Robinson, a senior nursing major.

Robinson said she used to take the New Haven shuttle to get back to her off-campus home because it was close to Union Station. She said the service provided easy and safe transportation for students to the city.

Now that there is no Quinnipiac-provided bus, Robinson relies on her family to come to pick her up. She questioned whether the pandemic was the central reason for the New Haven shuttle’s suspension as well as why the university has not brought it back when campus life is “semi back to normal.”

Besides the loop that runs between the three campuses, the only other shuttle is the weekly route to North Haven and Hamden shopping areas.

An SGA survey of 475 students showed that only 45% of the students are currently using the existing shopping shuttles. When it comes to overall satisfaction with the off-campus services on a scale of -100 to 100, the average score is at -81.

Over 81% of survey respondents also said they would like to see the shuttle go to Union Station in New Haven.

SGA President Nick Ciampanelli said former Chief of Public Safety Edgar Rodriguez reduced the budget for transportation to New Haven in response to COVID-19, but the cut has continued to this academic year.

Chief Experience Officer Tom Ellett said he was not aware of the service to New Haven since it was not listed in the contract with the provider, ProPark, when he came to Quinnipiac in 2020, after the budget cut was made.

“I didn’t know that (the contract) was any different than what it was,” Ellett said. “We copied what we had (in 2020), so that’s kind of the reality of why it wasn’t put in.”

Ellett said the university is looking into ridership information to potentially add a loop to the city twice a day on weekends. He said that could happen as soon as this academic year.

Grace Doyle, a first-year film, television and media arts major, said she and one of her friends took an Uber to New Haven once, costing them $40. Doyle said they also had to wait for the ride in the dark without knowing when it would arrive.

“I think adding a shuttle to New Haven would be a good idea because it would be safer and you would know the exact time it would be picking you up and dropping you off,” Doyle said.

Sarah Hardiman, a first-year advertising major, said providing a loop that goes to other towns would allow students to explore different communities and spend more “quality time” with friends outside of Quinnipiac.

“Having a shuttle that goes to New Haven would be helpful because it would be easily accessible, cheaper and you wouldn’t have to worry about splitting the cost among friends,” Hardiman said.

Ciampanelli and Ellett have been in communication about this issue after they received emails from students and parents, they said. The SGA will submit its survey data to the administration to find a resolution.

“Given the cost of shuttles, there’s an inherent decision to be made as to where we will have to cut funding if we are to bring back the New Haven shuttle,” Ciampanelli said.

The SGA president said there is “certainly” the possibility of expanding more off-campus stops, including Bradley International Airport. He said he has seen students’ demand for the services. According to the survey, 29% of students would like a Quinnipiac-run ride to the airport.

Ellett said he has heard some of the calls for more off-campus shuttles but not to a great extent. However, he said that doesn’t mean it is not an issue.

“I’m working with SGA to see, once we get the ridership information, what are the things we might need to reallocate to make a change,” Ellett said.

Ciampanelli said students should voice their concerns and complete any surveys from SGA because quantitative information can influence the administration’s decision.

Whether or not the New Haven shuttle will return, the university will dedicate a shuttle for the admissions team to facilitate campus tours between Mount Carmel and York Hill campuses as one of the strategies to recruit more students. This service will launch on Oct. 4.

“We had an opportunity to invest some additional funds from another source for showing the campus in York Hill because it’s not currently a part of the day-to-day admissions tours,” Ellett said. “It’s a way to show off (what) I think (is) a really vital part of our campus, the York Hill campus.”

Ellett said the funding for this came from a different source than what the university used for student shuttles to off-campus locations. He did not say which source it came from.

Update 9/24/2021: The university added a loop to Union Station in New Haven twice a day (8 a.m. and 6 p.m.) on Fridays, Saturdays and Sunday. The stops include South Lot, York Hill, Union Station and Church/George streets. Schedules can be found on MyQ.