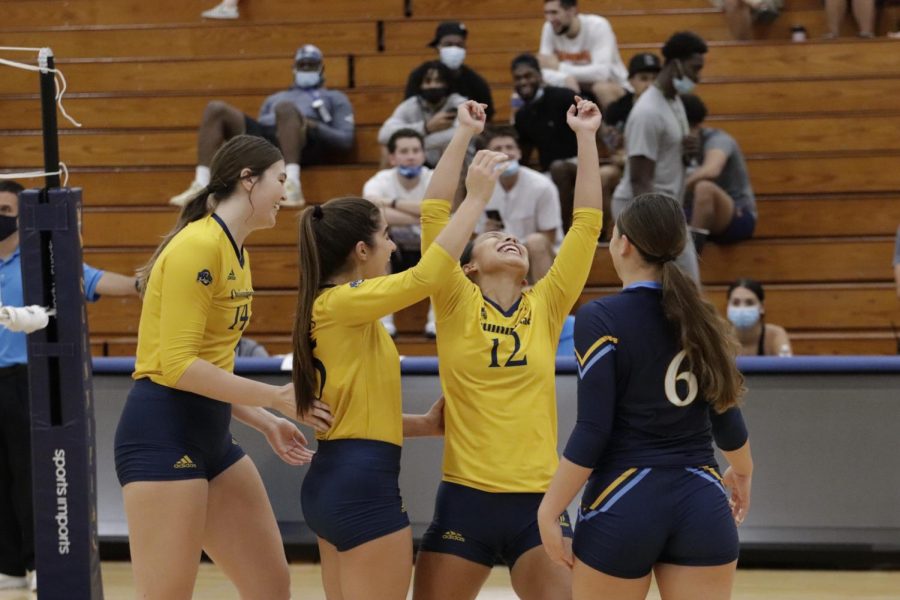 The Quinnipiac women’s volleyball team secured its second win of the season in its home opener in three sets against the St. Peters’ Peacocks on Saturday, Sept. 18. The game opened MAAC play for both teams, and snapped an eight-game losing streak for Quinnipiac.

The second set was more of the same from Quinnipiac. The teams went back and forth for the first nine points until the Bobcats went on an 8-0 run that put them up 13-4. This set was when senior middle blocker Nicole Legg made her presence known, contributing four kills and three blocks to her team’s cause, frustrating the Peacocks’ offensive attack with her 6 feet 3 inch frame in front of the net.

The Peacocks did not go quietly, however. Both teams played a competitive third set through the first 27 points, with Quinnipiac leading St. Peters 15-12 before the latter called a timeout. The breather that the Peacocks provided the Bobcats happened to be just what they needed, as they finished off the set on a 10-3 run. The final kill came from junior right side hitter Alisa Meija, assisted by senior setter Nicole Migliozzi.

Behind the success of the hitters, this match was dominated by the toughness and consistency of the Bobcats’ middle and back line, led by sophomore setter Chloe Ka’ahanui and freshman libero Faavae Kimsel Moe. Ka’ahanui was dominant in the setting game, and while not appearing much on the stat sheet, Kimsel Moe played an almost flawless game from the libero spot, giving her teammates ample opportunity for offensive success through her sets.

“Chloe, although she’s not a first-year, this is really her first year taking the helm of the offense, and it takes time to connect and time to feel comfortable with each other and trust each other,” said Quinnipiac head coach Kyle Robinson.

Robinson was impressed by the performance of his setters throughout the game and the progress they have shown during the season to this point.

“I think we’re getting a lot more consistent play from our setters,” Robinson said. “… You can have the two best players, but if they don’t connect or feel comfortable with each other, it’s tough, and that’s what you’ve been seeing… I think what you’re seeing is a lot of hard work through those eight games that we lost, and out of that hard work, a lot of trust came.”

In total, the game was led offensively by Baker and Diaz, who led the Bobcats in kills with 13 and 11, respectively. Those kills would not have happened without the setting dominance of Ka’ahanui, who led both teams in assists with 31.

The next closest was St. Peters’ freshman setter Jayden Easingwood, who had six. Quinnipiac senior middle blocker Nicole Legg dominated the middle of the court, accumulating 5.5 total blocks for the Bobcats.

This win broke an eight-game losing streak for the Bobcats that dated back to Aug. 27, when they beat Holy Cross three sets to two. When addressing that streak, Robinson emphasized the importance of the developments that can come from the losses his team has faced.

“It’s all about growth,” Robinson said. “If we came in right away and we’re just winning everything, then I’m doing something wrong. I’m not putting us in a position to be competitive. These eight games, as tough as it looks, was great for us. It does put us in a really nice place for when we come into MAAC play to look at different competition and go ‘oh we’ve competed at that level before and we can handle ourselves.’ So I expect us to compete hard like we have been doing.”

Quinnipiac is now looking to maintain this momentum against the 2-8 Rider Broncs at home tomorrow at 1 p.m. at Burt Kahn Court, while the Peacocks will look to bounce back from this loss on the road tomorrow against the 6-6 Fairfield Stags at 1 p.m.

The Bobcats are itching to prove themselves against a challenging opponent like Rider.

“I know Rider was the reigning champs, so they’re going to come in here with a chip on their shoulder, but I think we’re ready to take care of business and to make a point in the MAAC,” Baker said.

With both teams sitting at a 2-8 record, this matchup looks to be a pivotal one in each teams’ season, and possibly even the entire MAAC. In order to win, the Bobcats need something to push them over the top. Luckily for Quinnipiac, Baker knows exactly what that is.

“Heart. Lots and lots of heart. I think we have the physicality, we have the tools, now it’s just going to come from us here.”