Operation mirrorball trophy: Disgraced influencer Olivia Jade has been cast on ‘Dancing With the Stars’ 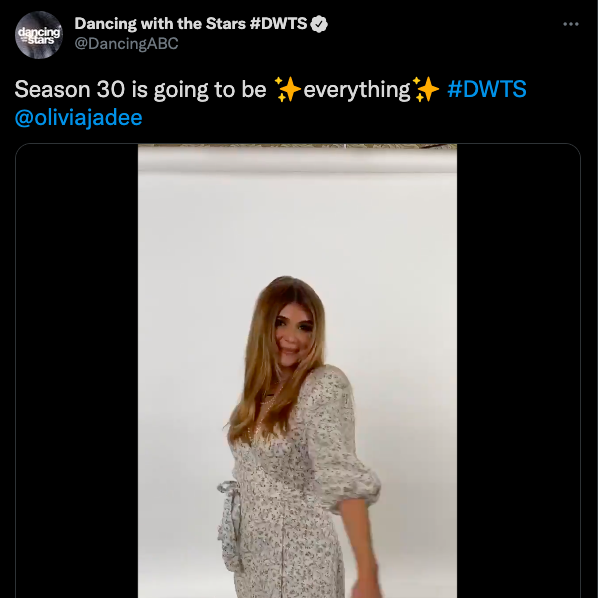 The 'Dancing with the Stars' Twitter announced that Olivia Jade Gianulli would be a contestant of its season 30 cast on Sept. 8. Screenshot from Twitter @DancingABC

The casting of infamous beauty influencer-turned-fraudulent student-athlete Olivia Jade Gianulli on season 30 of “Dancing with the Stars” (DWTS) has fans asking: “Whatever happened to predictability?”

Gianulli, the daughter of “Full House” star Lori Loughlin and fashion designer Mossimo Gianulli, initially rose to fame in 2018 with her eponymous YouTube channel. Through sharing intimate moments of her life, she has amassed more than 1.8 million subscribers. That’s why the nation was stunned when it was revealed in 2019 that Gianulli’s parents bribed officials at the University of Southern California to admit her under the guise of being a rowing athlete.

The scandal, nicknamed by authorities as Operation Varsity Blues, sharply capsized Gianulli’s internet presence to nonexistence. This was largely due to the prosecution of her parents, who each pled guilty to charges of conspiracy to commit fraud and ultimately served prison time. Gianulli’s online silence lasted for just nine months, when in December 2019 she released a YouTube video titled “hi again.” At the time, Gianulli spoke of the challenges of the preceding year but said she could not speak of specifics due to the ongoing prosecution of her parents.
It would be another year until Gianulli addressed the scandal directly again, this time on Jada Pinkett-Smith’s talk show, “Red Table Talk.” The highly teased interview showed Gianulli acknowledging coming from a place of extreme privilege, to the point where she never thought what her parents did was wrong. Some topics went unaddressed — like the infamous photos of Gianulli posing on rowing machines. Regardless, she said at the time that she believes in second chances and wanted to move forward with her life.

This begs the question, is publicly reemerging once a year really moving forward with her life? Will Gianulli always have to face the scandal that made her a household name? These are answers we’ll hopefully get during her stint on DWTS, which is set to premiere on Sept. 20. Twitter is already not about it. After the Sept.8 announcement, One user wrote, “who decided to give olivia jade airtime on #DWTS and are they fired yet?”, with another saying, “I can’t wait for Olivia Jade’s tearful waltz about how hard her life has been after she was a willing participant in a massive fraud.”

They’re not wrong. But DWTS is no stranger to weird, and sometimes controversial, casting. The likes of former White House Press Secretary Sean Spicer and Netflix star Carole Baskin have competed for the Mirrorball in just the past two years, to name a few. In recent years DWTS has cemented itself as the tipping point for B and C-list celebrities who will draw an audience, distantly straying from the “teaching celebrities how to dance” reputation.

So am I really surprised DWTS producers are jumping at the opportunity to cast a disgraced 21-year-old who is sure to elicit viewership? Not at all. Am I disappointed in it? Incredibly. A reality competition show is not the place for a redemption tour, but I will definitely be tuning in to see how she will handle it.

Gianulli’s life will no doubt always be a reminder of the astounding privilege of being rich and white, so what’s the point? If I had to guess, she’s likely leaning on a quiet, cutesy demeanor to fix her image and take her far in the competition. But make no mistake, she is never going to be able to shake the irreparable damage of her entitlement.