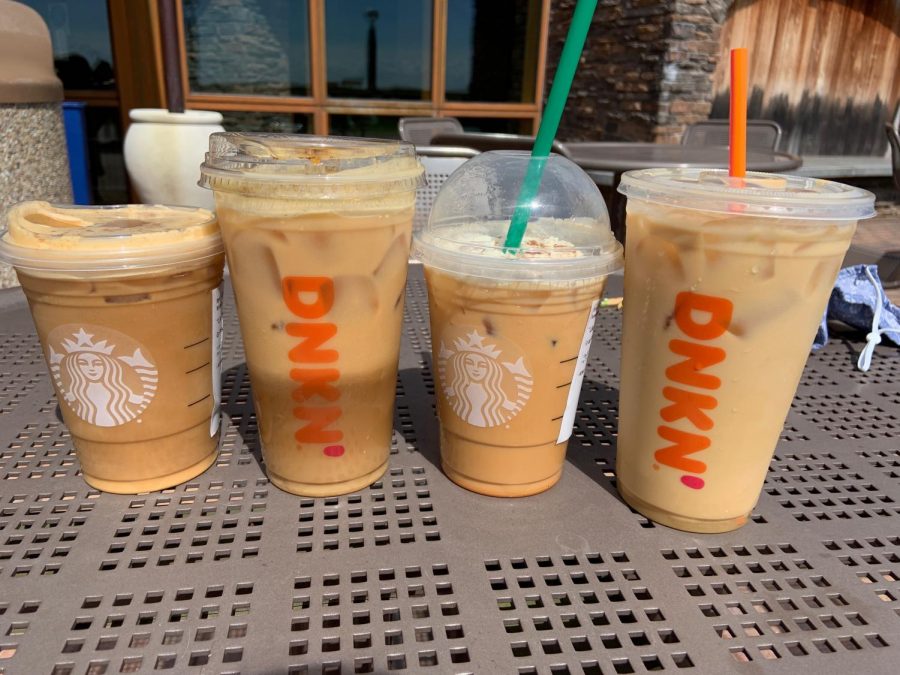 With temperatures starting to drop and leaves preparing to change colors, it is officially time to grab a pumpkin-flavored drink.

With Starbucks right on campus and Dunkin just down the street from york hill, we have conducted an experiment to see what is the best pumpkin-flavored drink between our coffee staples.

#1 — Dunkin: Medium Iced Pumpkin Coffee with three creams and three sugars
Jess: Once Dunkin starts offering its pumpkin-flavored drinks, this coffee becomes my go-to choice. The spice of the pumpkin flavor perfectly balanced out the cream and sugar that was added to the drink. It wasn’t overly strong, but I could tell it was the pumpkin spice flavor. Overall, it was the best pumpkin drink out of the four we tried.

Emily: This was definitely the best drink of the bunch. I loved how the pumpkin flavor was really strong, but you could also taste cinnamon and other spices that are included in the drink. This was the first time I’ve had this, and I will definitely make this my new drink of the season.


#2 — Starbucks: Pumpkin Cream Cold Brew
Jess: This is my favorite seasonal drink from Starbucks. The cream cold brew is absolutely delicious and blends well with the rest of the drink. Unlike Dunkin’s version, the flavor of the coffee isn’t washed away by the cream. When compared to the PSL, this drink handles the pumpkin flavoring much better. It actually tastes like pumpkin. However, Dunkin’s pumpkin iced coffee is just slightly more delicious and the drink I would run out to get more than the cold brew.

Emily: Compared to Dunkin’s pumpkin cold brew, this one was better. I liked the cream and the drink had a smoother texture. The pumpkin flavor is much stronger and is well-balanced by the spices. I also think Starbucks’ cold brew tastes better than Dunkin’s, which helps make the drink better overall. This should definitely be the face of Starbucks’ fall drink season.

Emily: I really liked this drink. I felt like it was a pretty expected taste for a pumpkin-flavored coffee. However, I felt like the pumpkin wasn’t as strong as I would’ve preferred. The nutmeg flavor was intense, which I wouldn’t have minded if I could taste the pumpkin better. The pumpkin spice syrup at Dunkin definitely has more “spice” than Starbucks,’ so if that’s your preference, this drink is definitely up your alley.


#4 — Starbucks: Pumpkin Spice Latte
Jess: After not having the pumpkin spice latte (PSL) from Starbucks in over a year, I was excited to take a sip of this iconic drink. Sadly, I was very disappointed. I couldn’t even tell that it was pumpkin-flavored. Even though the drink was the iconic orange color, the flavor was either not correctly mixed or when comparing it to other pumpkin drinks, the taste didn’t come through as strong. Overall, it was my least favorite drink out of the four we sampled as the pumpkin wasn’t distinguished enough.

Emily: The Starbucks PSL is what people think of when pumpkin-flavored coffee is mentioned. However, this was also my least favorite of the four drinks we had. It was overly sweet, which tends to turn me off a drink. The latte only tasted like milk and sugar. The pumpkin and espresso were nowhere to be found. Jess and I tried to determine if the drink was just made poorly or if this was just how the latte is supposed to taste. Either way, we couldn’t drink more than the two sips we had.

Conclusion
Jess: In my opinion, the best drink out of the four we sampled was the Dunkin Pumpkin Iced Coffee. A close second was the Starbucks Pumpkin Cream Cold Brew. The Dunkin version of the Pumpkin Cream Cold Brew was my third favorite and finally, my least favorite was the Starbucks Pumpkin Spice Latte. After trying all of these different pumpkin coffee drinks, I now know what my go-to drink will continue to be. Get excited for another fun pumpkin season!