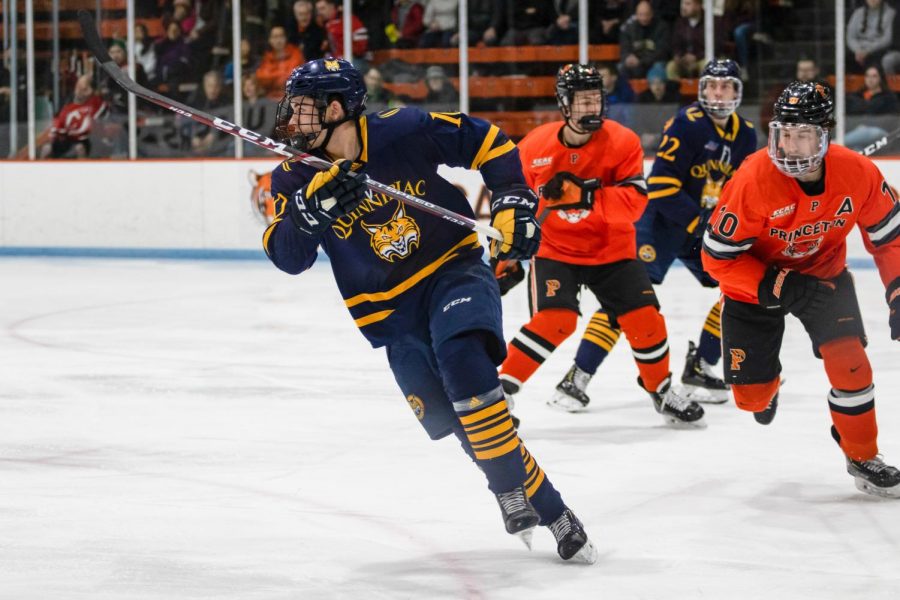 The Quinnipiac men's ice hockey team is ranked No. 11 on the most recent USCHO poll.

The No. 11 Quinnipiac Bobcats men’s ice hockey season is rapidly approaching, and the opening schedule becomes more exciting as the games draw near.

After a tough overtime loss in the regional round of the NCAA playoffs and losing three key players that helped lead Quinnipiac last season, the Bobcats have their work cut out for them to start.

The team’s opening weekend is the Ice Breaker tournament being held in Worcester, Massachusetts from Oct. 8-9 where it will face off against No. 6 Boston College on Friday and then Northeastern, who received 11 votes on the most recent USCHO poll back in April.

Quinnipiac will then travel to Vermont the following week and host No. 5 North Dakota the week after for back-to-back games.

All rankings are USCHO-based and are subject to change leading up to the season as the last poll did not account for incoming freshmen and transfers, but this is arguably one of Quinnipiac’s toughest opening schedules of the last decade.

“We’re excited to get the fans, first of all,” Quinnipiac men’s ice hockey head coach Rand Pecknold said. “It’s an aggressive schedule for sure, but we want to test our guys early and play the best. I’m really excited to get North Dakota to get out here for two (games).”

Yes, fans will be allowed to attend hockey games at full capacity with a mask. But there are some new faces for fans to see, as the roster has drastically changed since March 27.

After talking with graduate transfers goaltender Dylan St. Cyr and forward Oliver Chau, it’s clear that they look confident and eager to get the season going.

“This is a winning culture, although they haven’t gotten over the (championship) hump yet,” Chau said. “We have an unbelievable group and there’s a lot of excitement going into this year.”

Bringing in Chau was extremely important for Quinnipiac after losing its best playmaker in former captain Odeen Tufto. While Chau is not as prolific as Tufto at putting up points, he still is a disciplined, strong playmaker and play-driver that will help the Bobcats’ top-six produce.

The most important transfer, only because of the position he plays, is St. Cyr. After finally being granted the starting role at Notre Dame this past season, he put up impressive stats in the Big 10. In 23 games, he posted a .921 save percentage (SV%) and a 2.44 goals against average (GAA).

Notre Dame had its season cut short due to a COVID-19 outbreak and missed the regional round of the NCAA playoffs. St. Cyr looks forward to getting back to the playoffs and making some noise in the process.

“This is somewhere I really wanted to go,” St. Cyr said. “I love the opportunity and it sounded like a great culture over here, so I was really excited about it.”

Quinnipiac had 10 new players join the roster this year from graduate/senior transfers and incoming freshmen. It’s a new look for the team, and it’s something that Pecknold is embracing despite only having one graduate transfer ever in his career with Quinnipiac.

As for the returning key players for Quinnipiac, they all were happy about how the team is meshing and that the top goal is to secure a national championship.

Seniors Ethan de Jong (forward) and Zach Metsa (defenseman) round out the leadership core and are focused on generating another individually successful season.

Following an excellent season, de Jong has become a gem in Quinnipiac’s offensive scheme. Not to mention his usage and placement on the power play is crucial.

Metsa, who lost one of his defensive partners in Peter DiLiberatore this offseason, stands to be Quinnipiac’s best and most important defenseman. The offensive aspect to his game exploded this past season, putting up 26 points in 29 games and finishing third on the team in points.

Returning for his sophomore season, forward Ty Smilanic has become one of the go-to guys to produce and, much like last year in lieu of senior forward Wyatt Bongiovanni who was hurt, he must step up again this year without Tufto.

Quinnipiac needs him to be healthy for this season if it wants to be a true contender. Bongiovanni plays a key role in the offense and most importantly on the power play. His impact on the offensive end is invaluable as he excels at creating his own space and finding gaps in the defense.

The newly named captain’s eyes are set on winning the national championship.

“That’s number one,” Bongiovanni said. “That’s the biggest thing on my mind, it’s the biggest thing I want to check off on my to-do list. In terms of individual goals, obviously, there’s always an ambition to go for a certain amount of goals and a certain amount of points, but at the end of the day, I’m worried about getting our team to the Frozen Four.”