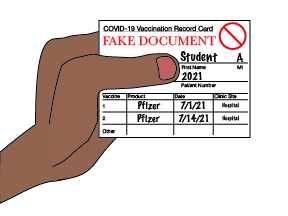 Quinnipiac University required its students to upload a photo of their vaccination card to the Student Health Services portal by Aug. 1, relying solely on a trust based verification system upon student arrival.

Despite a 95% vaccination rate on campus, many individuals within the community are questioning the accuracy behind trusting in students to do the right thing.

“All you really needed was a photo and you can just download one off the internet,” said Lorraine Camilo, a sophomore criminal justice major. “Now, if I was supposed to show my card and prove it was real, then it’s a different story.”

Camilo, who is fully vaccinated, said she has not heard about fake vaccine cards being used in the community. However, she believes students should be able to opt out of getting vaccinated, as long as they wear masks and get tested frequently.

“It’s their body and they are entitled to do what they want with it,” Camilo said.

Other students, including Morgan Bloom, a sophomore political science major, said they were confident in the health center’s process.

“They are requiring students to upload them to the health center’s portal and from there they can cross reference the info given there to their student info,” Bloom said.

Bloom, who said she had heard talk about fake vaccine cards, but called them “pointless,” said that following the university’s rules around vaccine requirements “will allow the school community to return to normal in the safest way possible.”

Associate Vice President for Public Relations John Morgan declined The Chronicle’s request to interview a staff member from the Student Health Services, but instead ensured that the university is taking precautions against falsities.

“Student Health Services reviews every card that is uploaded, ensures the appropriate information and signatures are included and follows up with students if there are any questions or missing information,” Morgan said.

The sale of fake vaccine cards has become somewhat of a new business venture, made easier by the fact there is no universalized database of vaccinated individuals.

A simple Instagram or Twitter search tells all and shows a ton of accounts that claim to provide the fake cards to paying customers.

One Twitter account, who The Chronicle chose to refrain from identifying to avoid encouraging illegal sale, warns users to “stay aware” of the situation, get their vaccination cards for free while urging individuals the virus is just a common cold.

As common as the sale of fake vaccination cards is, it is still a crime to use government seals such as The Department of Health and Human Services or the Centers for Disease Control and Prevention without authorization. This was reiterated in March by the Federal Bureau of Investigation (FBI).

“If you make or buy a fake COVID-19 vaccination record card, you endanger yourself and those around you, and you are breaking the law,” the FBI’s statement reads.

Multiple students shared that they have heard about the use of fake vaccination cards with altered dates of birth in companion with fake IDs to gain access to 21-plus spaces such as clubs that require proof of vaccination.

“The scandal I’ve heard of is mostly about people using fake vaccine cards to get into clubs to show they are older than they are,” said Connor Benedetti, a junior strategic communications major.

Popular clubs such as Toad’s Place in New Haven are requiring proof of full vaccination or a negative COVID-19 test, further contributing to the use of fake vaccine cards.

“I honestly think it’s super dangerous,” Benedetti said. “It puts more people at risk if you’ve lied or have a fake card.”

Emma Frey, a sophomore biology major, said she’s also heard of underage students using fake vaccine cards to reflect birthdates on fake IDs. Though she has not heard of students falsifying their immunization record simply to bypass the university mandate, Frey said she is still concerned about the verification process.

“It worries me because we have a lot of high risk people on campus,” Frey said. “Getting a fake vaccine card could put a lot of people at risk, and because we don’t have herd immunity, it could cause rises in variants.”

The delta variant, a mutated strain of COVID-19, has caused a rise in positive cases across the nation. As a result of the variant’s impact, the university reintroduced a mask mandate for the fall semester.

Some students have seen fake vaccine cards firsthand in capacities outside campus. Brandon Assi, a sophomore biomedical sciences major, witnessed the production of falsified records in his workplace.

“I used to work at Staples copy center,” Assi said. “I can’t begin to tell you how many people tried to get them printed.”

When it comes to medical and religious exemptions, the university announced via email in June that they would accept requests for exemptions to the mandate through health services.

The university’s COVID-19 page states that students who do not submit a vaccination record and do not have a valid exemption will not be allowed to live in university housing and may be subject to further penalty.