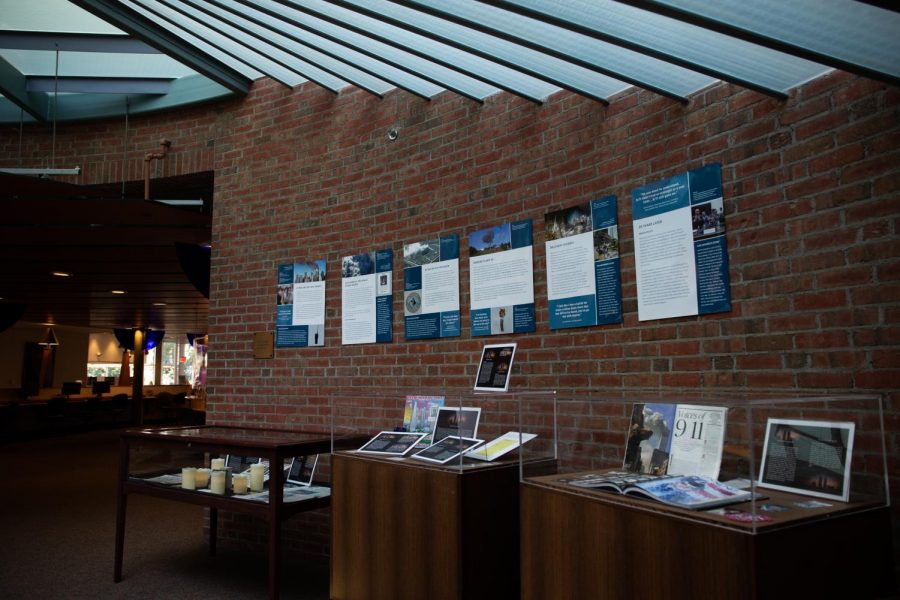 Quinnipiac University's Arnold Bernard Library put up a display about the 9/11 terrorist attacks.

Fifteen days after the terrorist attacks on 9/11, sophomore mathematics major Gustavo De Souza of Westchester County, New York, was born. He said he was glad that his family was safe from the attacks.

“I know 9/11 is probably the biggest moment in U.S. history in terms of these attacks, but we have to keep in memories that a lot of people go through this every single day,” De Souza said, referring to other conflicts around the world.

As this year marks the 20th anniversary of 9/11, Quinnipiac University students reflected on how they learned about the incident and how that has impacted them growing up.

Jenna Coppola, a junior occupational therapy major, said she knew what happened at a young age in elementary school and her dad was working in the city and witnessed the second plane hit the tower.

“I would just say, especially living in New York, everyone has a story,” Coppola said. “I think it’s honestly sad but interesting to hear. It does unite everyone because everyone could relate.”

“Even my mom said, ‘this never used to be like this,’ like going to the airport, now you have to be four hours early to get through TSA (Transportation Security Administration) and all these different checks and security,” Minerva said. “You never really had to think about that type of thing (before the attacks).”

The anniversary of 9/11 is particularly meaningful for Coppola as someone from Staten Island, New York. Back in elementary school, Coppola said every anniversary was dedicated to remembering the attacks. However, when she came to Quinnipiac, she felt like the memorial became less significant.

“(I) definitely think they should be bigger. I know, I think they lowered the flag last year, but I think that’s the most they’ve ever done,” Coppola said. “I mean people from Connecticut, it’s still in the tri-state. I feel like that should be honored a little more.”

Quinnipiac honored the lives lost during the Sept. 11, 2001, terrorist attacks with a memorial flag-raising ceremony on the Mount Carmel Quad.

On Sept. 10, President Judy Olian addressed the anniversary with an email to students and faculty members. She remembered the Bobcats lost during the attacks —  Frank H. Brennan ’72, James C. Cappers ’92 and Timothy C. Kelly ’85 —  and reflected on the impact of the losses.

“Amidst the national grieving, our common humanity brought us together 20 years ago,” Olian wrote in the email. “Those bonds that fortified our country, then, must continue to be the foundation that knits us together in our shared future.”

Administrators and faculty members also shared their experiences about living through the attacks on the university’s reflection page.

Professors also produced projects to remember the impacts of the day.

Journalism assistant professor Ben Bogardus launched a 10-episode podcast focusing on what journalists across the nation were doing and how they covered 9/11. Game design and development professor Greg Garvey developed an interactive project featuring his original composition called “Remembrance 9/11.”