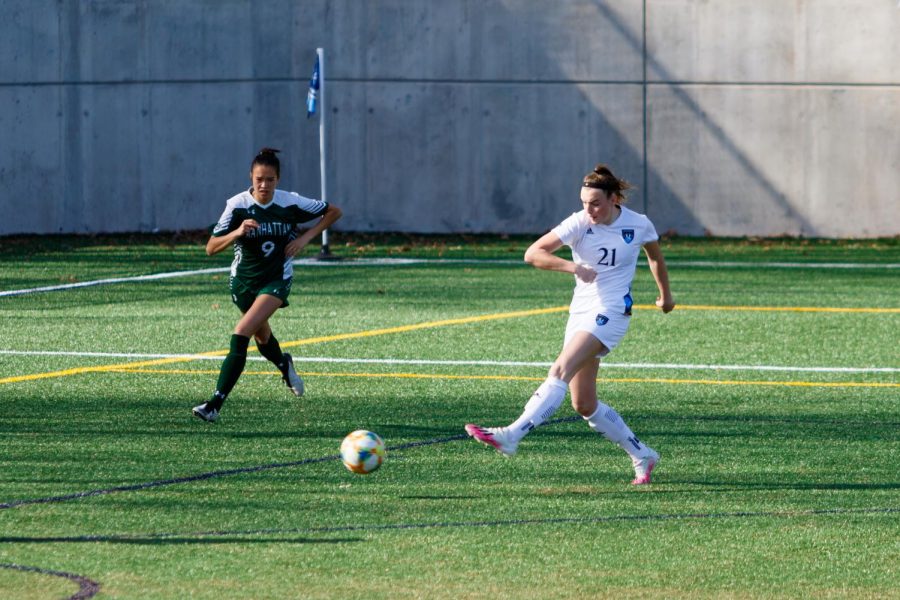 Sophomore forward/midfielder Rebecca Cooke stayed hot to start the season, adding an assist to her collection of points (14 total points this season.)

All eyes were focused on Quinnipiac sophomore forward Rebecca Cooke this game. She has had a phenomenal start to the 2021 campaign for the Bobcats. Her six goals and one assist (13 points) in the first three games this season lead Quinnipiac in team scoring by a wide margin.

The game started fairly slowly for both teams with only eight shots during the first half. The first scoring chance of the game came during the 26th minute in which Vermont graduate student midfielder Ella Bankert sent one across the box to senior forward Cricket Basa, who headed it and missed the goal post just wide left.

Just minutes later, the Bobcats struck first. The goal was set up by Cooke, who got her first chance to make something happen on a breakaway opportunity off a perfect pass at midfield from graduate student forward Lauren Triglione. However, Vermont senior goalkeeper Lydia Kessel read it nicely and deflected it away. Sophomore forward Courtney Chochol was there to back her up off the rebound and finish it off to put the Bobcats on the board first.

Cooke was credited with the assist on the first Quinnipiac goal which came at the 33rd minute of the first half, giving them a 1-0 lead.

Quinnipiac women’s soccer head coach Dave Clarke spoke on the importance of Cooke’s presence on the field as she continues working on an impressive start to the season.

“She can play in multiple positions,” Clarke said. “Her strength is not necessarily what she does with the ball, it’s her movement. And it’s hard to defend movement and pace and she has an abundance of that.”

The offense and the physicality intensified from both teams during the second half. Multiple yellow cards were handed out, two to the Bobcats, including Cooke and senior forward Emily Loney. The lone goal scorer for Vermont, senior midfielder Alyssa Oviedo, also saw yellow.

The Bobcats regained the lead to make it a 2-1 game exactly at the 60-minute mark of the game on a penalty kick converted by senior midfielder Selena Salas after she was hit on the wrist.

Quinnipiac added another goal in the late stages of the game in the 83rd minute as freshman midfielder Ella Gagno had her moment for the Bobcats. Kessel came out of the net for Vermont and attempted to roll the ball to one of her teammates, but it went past, allowing for Gagno to kick a high, arching ball that bounced over and into the net, putting Quinnipiac ahead 3-1 and securing her first career goal.

The Bobcats have looked strong in non-conference play, allowing just two goals over the course of four games. As the MAAC schedule begins later this month, Clarke mentioned the mindset needed out of this team going forward to prepare for conference play.

“We’ve got to continue to build, not take anything for granted, take it one game at a time,” Clarke said. “It shifts now to our next game, there’s lots of little things…they’ll learn that it’s not about the goal allowed here or in Maine, it’s about the game that we need when it’s 0-0 with five minutes to go.”

After being selected as the No. 2 team in the MAAC Preseason Coaches’ Poll, the Bobcats kept rolling and improved to a perfect 4-0 on the season with the victory. Quinnipiac heads to the Bronx on Sunday for its next non-conference matchup with the Fordham Rams. Kickoff is scheduled for 1 p.m., and you can stream the game on ESPN+.