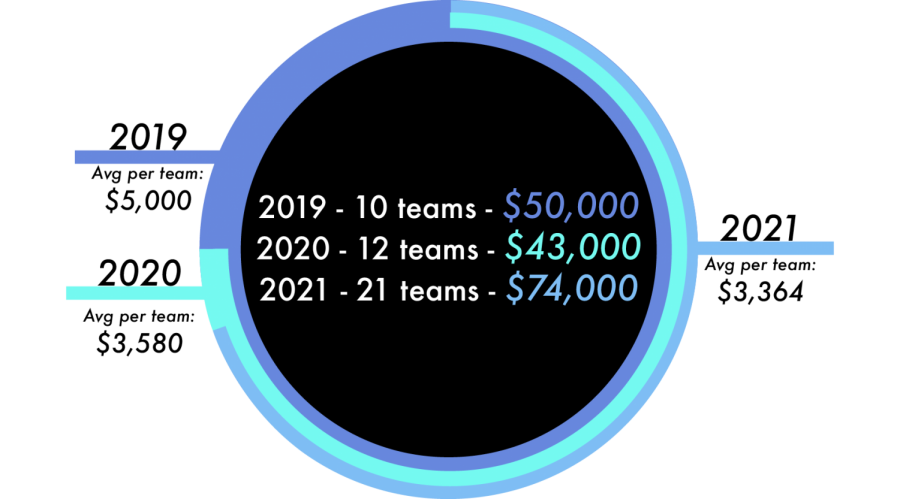 Club sports leaders asked the university for over $100,000 this year but only got $74,000 altogether, according to multiple sources. The leaders were offered two options — to take $43,000 while the university agreed to pay for athletic trainers or to take $74,000 with an additional $75 in membership dues to cover some of the training themselves. The club sports advisory board voted for the latter.

First-year law student and Club Rugby President Drake Marchese explained that his team first came up with a list of what it needed and wanted that totaled around $5,000. The team narrowed it down to $4,500, but it ended up receiving only $3,333 from the university. Marchese said it was not enough.

“It was basically the skin and bones of what we needed to successfully run our club organization,” Marchese said.

Marchese said he needed to increase the dues to pay for trainers and to cover the extra $1,000 that the team needed. Even though the season has not begun, Marchese said he has already felt the impact of unexpectedly low funding.

“We can purchase things with the money that we had been allotted, but we have to be hesitant because our main season is in the fall and we’re going to be using a majority of our budget for this season,” Marchese said. “But then we also have sevens in the spring. So we’ve been thinking about how are we going to make it so that our players who are paying even more now can get at least two different seasons of rugby.”

Director of Campus Life for Recreation Michael Medina explained that the 10 initial teams received an allocation of $5,000 in 2019. He said those teams don’t need that much money in their third year. Instead, the student representatives on the board focused more on the start-up costs of the new teams.

“We were very strategic about how we allocate that money because our allocation goes through our students,” Medina said. “The club sports advisory board does all of the allocating of funds to our student groups.”

Even though Medina acknowledged that students wish for more money, he said this is a “very healthy” amount compared to other institutions.

The average membership due for every team is around $250 or less, Medina said. After setting up new teams off the ground, he believes there will be more money for club sports next academic year.

“Start-up costs are very difficult to fully cover every team’s expenses,” Medina said. “We’ve really focused on what are the necessities of teams versus what are luxuries and making sure that we try and cover as much of the necessities as we possibly can.”

Medina clarified that $74,000 was the amount handed to the 21 teams, but there was another large chunk from the university for club sports that went to athletic training. Even though he said the total fund was larger than in 2019, there are also more teams.

Junior graphic and interactive design major and Men’s Club Soccer President Jonah Cohen told The Chronicle that the newly-recognized clubs received an extra $1,100 on top of the allotted $74,000 for every team.

“(The amount the men’s soccer team got) still gave us a little bit of extra money to work with,” Cohen said. “Every team estimates a little bit high just to see, and then we work together to lower it accordingly.”

In terms of team dues, the board voted for an additional $75 charge in exchange for more money from the university. Cohen said that helped new teams to get started, otherwise, they would have to double their membership dues to cover many expenses.

“A lot of the old teams were pretty sympathetic to that,” Cohen said. “We had all these high expenses come in so everybody was really nice about our perspective on it.”

He confirmed that club sport directors, who are the university’s employees, did not get involved at all during the allocation process. He said they waited for students to figure everything out.

Club rugby’s Marchese said the university’s club sports staff has been “amazing” and that they have done everything they can to represent the students. For the administration, it’s a different story.

“Especially in light of how other money has been spent already, I don’t think that (the administration) has some of the students’ organizations in (its) interests, I guess,” Marchese said.