Six storylines to watch during the Quinnipiac sports 2021-22 season 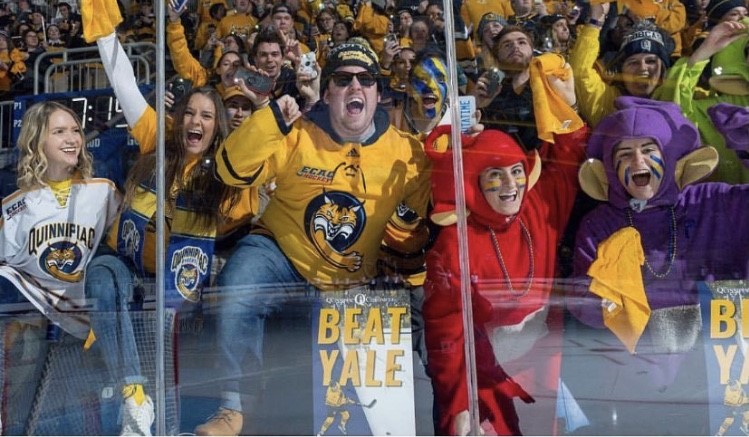 Fans haven't been able to attend men's ice hockey games since Feb. 29, 2019, the last home game of the regular season.

A lot of people were itching to flip the calendar to the 2021-22 school year. Of course, there were several events last year that took precedence over sports.

But Quinnipiac athletes got it pretty rough.

The vast majority of teams were only allowed to play in-conference games, severely limiting travel. Seasons were shortened for some, like the men’s and women’s basketball teams. They both played around 20 games, a significant abbreviation to their usual 30-game schedule.

Some teams had their season shortened and pushed back to an entirely different part of the year. The rugby team played only two games last year, and they were in the spring instead of the fall.

But, barring some sort of pandemic, everything looks to be back to normal for Quinnipiac athletics. The fall sports teams are actually playing in the fall, their seasons don’t appear to be in danger of postponement, and fans are allowed to file into stadiums, indoor or outdoor, to cheer on their Bobcats.

As the calendar moves swiftly onward, here are some of the most important storylines to follow for the 2021-22 season.

1. The rebounding champ is back

Graduate student center Kevin Marfo’s name probably sounds familiar for those who have hung around the Quinnipiac campus, although he wasn’t on the basketball team last year. That’s because Marfo was a dominant force for the Bobcats a year prior.

He began his Quinnipiac career in the 2017-18 season as a redshirt sophomore. Towering at 6-feet-8-inches, Marfo was the rock of the lineup. He was a straight center who could pull down double-digit rebounds on any given night.

But he blossomed in a big way as a redshirt junior, and his name became known far beyond Hamden. His 13.3 rebounds per game led the entire NCAA in 2019. He had 17 double-doubles in the 30-game season, pacing the MAAC. Riding his historic season, he transferred to Texas A&M to play his final undergraduate season. At a school with a higher profile, Marfo served as a rotation player, averaging 12.8 minutes and 3.7 rebounds per game.

But the COVID-19 pandemic granted athletes an extra year of athletic eligibility, and Marfo decided to take advantage of that opportunity. Now rejoining the squad that was denied its opportunity to play in the 2019-20 MAAC tournament due to the pandemic, Marfo is ready to run it back one last time in Hamden.

2. No injuries, no problem

The offseason for the women’s soccer team was rather short. Normally, in a season unadulterated by pandemics, the team plays its season in the fall, rests until the next fall, then repeats. But since last year’s season was pushed until the spring, the turnaround is much harsher.

And given that injuries were an issue for last year’s team, that’s not great news.

Yet, the Bobcats emerged as one of the best teams in the MAAC preseason coaches’ poll. The team ranked second among the eight teams due to its incredibly strong young core that’s ready to take the reins from the departed seniors.

Junior goalkeeper Meaghan Phillips, a former MAAC Rookie of the Year, has worked her way back from an injury-plagued 2020 campaign, as evidenced by the MAAC Defensive Player of the Week she brought home on Aug. 30.

Sophomore forward Rebecca Cooke is already a star, with a MAAC Rookie of the Year award to show for her four goals through seven games, which ranked third in the MAAC. Her emergence was one of the main reasons the Bobcats were able to weather the storm last year.

After struggling with injuries in 2020, the Bobcats still rode a talented group to a semifinals appearance. Now that the team is healthy once again, the sky’s the limit.

Only two years ago, the men’s soccer team graduated forward Eamon Whelan. He was one of the most prolific goal scorers the Quinnipiac pitch had ever seen. But the Bobcats still led the MAAC in goals scored last season (18 goals in nine games).

The Whelan-sized hole was plugged in part by junior forward Brage Aasen, who broke out in a big way as a sophomore in 2020. Aasen led the team in both goals (5) and assists (4), averaging 1.5 points per game. And he has the accolades to back it up.

He landed a spot on the All-MAAC team and on the United Soccer Coaches All-East Second Team as a sophomore and was a member of the All-Rookie Team as a freshman. That’s an impressive amount of success for a player with only two years of experience under his belt.

Aasen is just faster than the defenders he’s matched up against, and it’s that simple. The Bobcats liked to utilize the wing a lot in the 2020 season, which can only be done when you have a burner like Aasen on the pitch. Couple that with his spatial awareness and passing ability, and you get a player chosen as the MAAC Preseason Player of the Year in the 2021 preseason coaches’ poll. His best might be yet to come, and he’s only two years into his Quinnipiac campaign.

The women’s basketball team was riding high going into the 2021 MAAC tournament in Atlantic City, New Jersey. It entered the playoffs ranked as the No. 2 seed, squaring off against No. 7 Rider. Despite its low seeding, the 2021 Rider team had a lot of young talent that struck the iron at the right time, sending the Bobcats home far earlier than they were expecting.

Based on recent history, a loss like this is an outlier. The women’s basketball team went on a historic run in which it won the MAAC tournament in 2015 and from 2017-19. There’s no reason to think this team can’t once again produce when the games count the most. Although it’s not ideal to graduate guard Shaq Edwards, who averaged 12.5 points per game in her last full season and guard Vanessa Udoji, who was one of the better perimeter defenders on the team, the award-winning core is returning. Time will tell if this team is hungry enough to overcome last year’s disappointing finish.

5. Darkest before the dawn

After winning the first game of the season, the softball team went on to drop 11 straight contests. The team then lost 14 of its last 16 games.

The team collectively hit .249, but as the age-old saying goes, pitching and defense wins games. The Bobcats had a 5.74 ERA, second worst in the MAAC, and made the most errors in the conference (63).

The only bright side for the softball team is that the team’s best players are returning. In fact, it was last year’s freshmen who did a lot of the heavy lifting for the Bobcats. Sophomore infielder Kayla Thomas was the middle-of-the-order bat the Bobcats sorely needed, racking up a team-leading 33 RBIs and three home runs.

On the other side of the ball, sophomore pitcher Tori McGraw held a 4.75 ERA and pitched to a 5-7 record. Her ERA was the lowest of any pitcher on the team with more than four appearances. It works in this team’s favor that it boasts youth, but it will likely be hard to shake last year’s 8-28 overall record.

6. Fans are all the way back

Not a single student enjoyed having to full-on rush to get student tickets for men’s ice hockey games. It was nerve-racking, suspenseful and flat-out not fun.

But something tells me that’s all today’s students want to do.

Indoor athletics were closed to fans and spectators, leaving students on the outside looking in when it came to a certain Saturday night pastime. Yes, Toad’s Place was closed, but that’s not what I’m talking about.

The 2021-22 school year has afforded fans that opportunity once again. And after a long year, it comes not a second too soon.