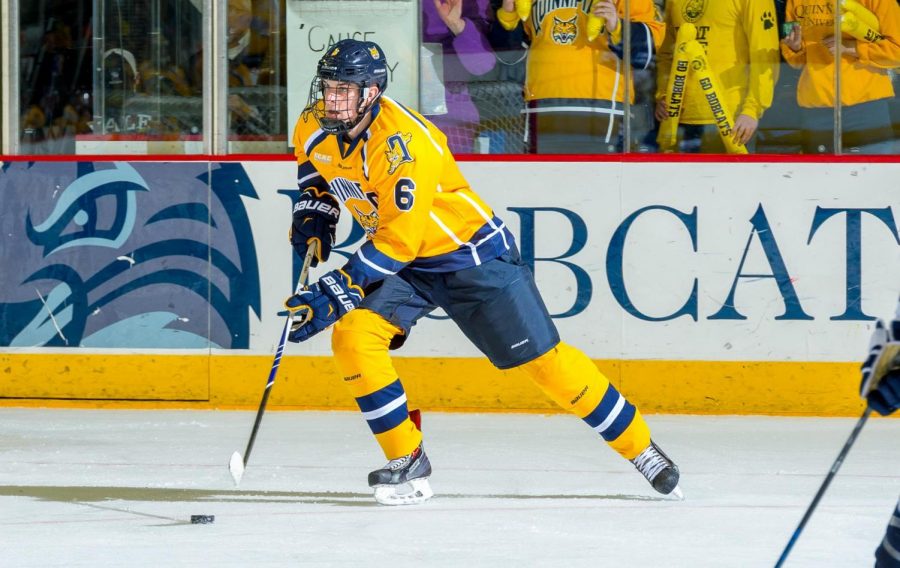 Devon Toews signed a four-year, $16.4 million contract with the Colorado Avalanche as a restricted free agent in 2020.

For the first time ever, a former Quinnipiac Bobcat, Devon Toews, received votes for the James Norris Memorial trophy, an annual award given to the best overall defenseman in an NHL season.

Not only that, but he secured more votes than two early season favorites in the Washington Capitals’ John Carlson and the Nashville Predators’ Roman Josi, who won the Norris trophy the previous season.

“I just feel like I had a consistent year from a playing aspect, whether you want to contribute that to taking a step in my game or the team I was playing for,” Toews said. “It does not matter to me, I just try to do my job to help my team win. Would I have had Norris’ votes if I was in New York? I couldn’t tell you the answer to that, but I loved playing for Barry Trotz there and I equally love playing for Jared (Bednar) in Colorado. Both coaches and organizations have put me in good positions to succeed.”

Toews was dealt in the 2020 offseason from the New York Islanders to the Colorado Avalanche, less than a month after assisting the Islanders in reaching the conference finals for the first time since 1993.

The Islanders are well known for their defensive scheming and shutting down the premier offenses in the league. However, it severely limits the impact defensemen can make on the offensive end, which in turn limited Toews’ ability.

“I thought it was going to be great for his career,” Quinnipiac men’s ice hockey head coach Rand Pecknold said. “I just thought in New York they had him slotted in a certain role and I thought he was better than that. I think Barry Trotz is one of the best coaches in the NHL, but they had a lot of depth at (defense) and I thought going to Colorado might be a new opportunity for him to get even more ice time.”

Joining Colorado, whose system allows its defensemen to produce more offensively, was the perfect match for Toews. He established his ability to be a two-way defenseman at every level, and the 2021 season personified that.

“Anytime you change teams, it’s a different group of players that you have to learn to understand,” Toews said. “The playstyles aren’t entirely different, but the personnel is and that is what takes time to learn. We have all been playing hockey since we were little kids and have had many coaches along the way, so most of the time when you go to a new team with a bit of a different system, the chances are you had done that somewhere along in your hockey career.”

After scoring 46 points in 116 games, Toews had a career year with Colorado, solidifying one of the best defensive cores in the NHL. In his first year with the Avalanche, Toews logged 24:46 minutes of ice time, which is just under five and a half more minutes of average ice time than his tenure with the Islanders. Not only that, but he also netted nine goals, tying him for No. 7 among defensemen and collected 31 points in 53 games.

As stated in a previous Chronicle article produced on Toews, his advanced analytics were nothing special. They were solid middle-pairing stats for an up-and-coming defenseman. The analytical difference in Toews’ play from 2018-20 and 2020-21 looks like two completely different players.

“I still prepare the same way and train the same way regardless of the team,” Toews said. “It’s a business so you know there is always potential for it so when it happens you have to run with it. It’s never easy leaving a great organization like the Islanders and I have made many lifelong friendships with players and staff there which I am grateful for.”

The three simplest metrics to use for more casual hockey fans or even for people that don’t know the game all that well are Goals Above Replacement (GAR), Wins Above Replacement (WAR) and Standing Points Above Replacement (SPAR determines how many points a player adds to his team in the standings, not scoring points). It gives a more complete picture of how useful a player is for a team’s success.

Comparing that to his teammate and Norris candidate runner-up Cale Makar, it was almost identical. Makar finished with a 16.5 GAR, 3.0 WAR, and 5.5 SPAR. The biggest difference between the two players is the offensive prowess that Makar holds.

Toews is a much better defender than Makar and was nearly unbeatable on defense at even strength. Diving deeper into how good Toews was last season, looking at Evolving Hockey’s GAR chart for all defensemen last season, Toews finished third in the league in total GAR. Makar finished first.

The GAR chart evaluates isolated impacts of a player at any given on-ice situation. More specifically, it takes into account a player’s impact at even strength on offense and defense (EVO and EVD respectively) on the power play, while short-handed and their ability to draw penalties versus taking penalties.

In total, even looking at GAR among all forwards and defensemen in the league, Toews finished No. 10 overall.

It was a long grind to get to this level of productivity, but Toews made the best of it. After three seasons with the Bobcats, Toews joined the Islanders’ AHL affiliate — the Bridgeport Sound Tigers — from 2016 until midway through 2019 when the Islanders decided to promote him to the NHL.

During his fifth game with the Islanders, Toews netted his first career NHL goal in overtime against the Chicago Blackhawks.

“First goal was incredible,” Toews said. “Having the opportunity to be on the ice in overtime is a privilege in itself. I’ve been fortunate to have a few and each one is uniquely special. One of the cooler gestures was Johnny Boychuk gifting me an engraved wine bottle with the final score and my name next to ‘OT winner’ on it. That is something I will keep forever.”

He then got his first taste of playoff hockey at the highest level. And so far, he has appeared in the postseason all three seasons of his NHL career.

“Only the first year was really a normal playoff environment,” Toews said. “The conference finals year was in the bubble with no fans so that was different, but the moment and the circumstances were the same. Having an empty building didn’t change how we prepared or attacked each game in that atmosphere. Obviously, this past year got close to full capacity again near the end of the year so it was nice to have the buzz back in the arena and be able to play in front of your home fans.”

All in all, it’s been a continuous grind for Toews — Quinnipiac’s most successful NHL player ever. And there’s more to come.

“Just a great person and a great ambassador for the university,” Pecknold said.