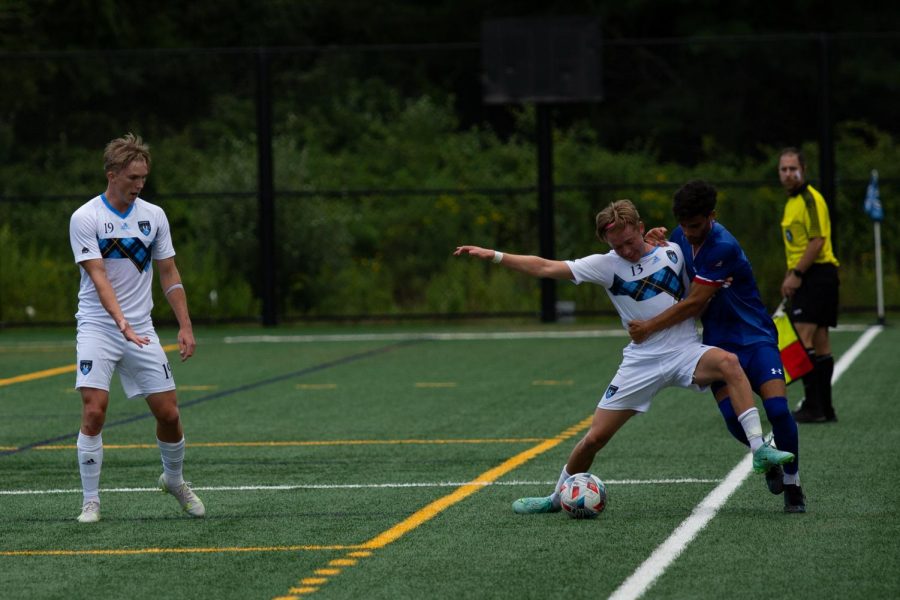 Quinnipiac men’s soccer continued its perfect start to the year with a 1-0 win against UMass Lowell, solidifying a 2-0 record in non-conference contests.

The Bobcats, who were ranked No. 1 in the MAAC Preseason Coaches’ Poll, looked the part in the first half. The intensity was high, led by graduate student midfielder and captain Paulo Soares. The way Soares flew around the pitch was reminiscent of last season where he was invaluable to Quinnipiac’s efforts that ended with it in the MAAC Finals against Monmouth in April.

“I thought we did better with some of our pressing today than we did against Boston College, especially early on,” Quinnipiac men’s soccer head coach Eric Da Costa said. “And I think that put them under some pressure to play out.”

Thanks to the tone set by Soares and fellow graduate student midfielder Simon Hillinger, UMass Lowell coughed the ball over several times which led to numerous chances for Quinnipiac. Junior forward Brage Aasen intercepted a careless pass from UMass Lowell junior midfielder Matthias Stingl in the sixth minute. Some back-and-forth play with Hillinger led to Aasen having a great chance to get Quinnipiac on the board, but the shot lacked the power or positioning to be of any threat to the River Hawks’ senior goalkeeper Christian Misesch.

But the scoreboard wasn’t showing zeroes for long.

The efforts of junior defender Henry Weigand led to another turnover courtesy of tireless defensive play. Weigand found junior forward Tomas Svecula who turned and slipped a through ball to junior forward David Bercedo. Bercedo, who was tied for the second-most goals on the team last season (3), controlled the ball in a way that made it look far easier than it actually was before dribbling at Misesch, slotting the ball with poise and finesse in the 12th minute.

The dynamic between Quinnipiac’s star attacking trio of Aasen, Svecula and Bercedo is among the best in the MAAC, as each were major contributors to the team’s overall 7-2 record last year.

“We have a really good relationship with each other,” Bercedo said. “We are friends, inside the field and off. So I think this is important, when you have these relationships, this connection on the field and aside.”

Quinnipiac enjoyed possession for the next 10 minutes, but the River Hawks started to claw back shortly after. However, Quinnipiac’s backline stifled any offense that came its way. It was a collective effort between Weigand, senior defender Jordan Bennett, sophomore defender Luke Allen and junior defender Magnus Reistad. All four heard their names yelled in admiration by the crowd.

It would be difficult to leave this first half without mentioning Aasen again. His abilities as a passer were clear, swinging the ball from side to side as if he had it on a rope. But his heralded dribbling skills were on full display in the 28th minute, using a scissor move around one defender before weaving back, causing a second River Hawk defender to slip and fall. It led to a shot that went wide, but Aasen was the MAAC Preseason Player of the Year for a reason. He will be a huge reason for where Quinnipiac finishes this season, for better or worse.

Quinnipiac entered the break with seven shots, three on goal, whereas UMass Lowell only put one of its three shots on target.

The second half had plenty of chances for both sides. Quinnipiac attacked through active play while UMass Lowell had six corners and plenty of set pieces to work with. Quinnipiac’s most notable chance occurred in the 81st minute when senior midfielder Noah Silverman slipped a clever ball through that led to a pass dancing across the six-yard line, but senior midfielder Alex Holle couldn’t put it away.

These non-conference results may not mean as much as MAAC games, but more games provide different game scripts to work around. A 1-0 lead held from the 12th minute on is a tough one to hold.

“I think we had to kind of grind it out, especially there at the end,” Da Costa said. “But we’re trying to get closer to being prepared to compete in conference. And once we get to that stage, we’re gonna have to figure out ways to grind out games.”

Freshman forward Sam McCann was one of several substitutions who relieved the core starters. A Connecticut native who led his team in goals for six consecutive seasons, Da Costa spoke glowingly of the first-year striker who filled in for Bercedo at the end of each half.

“Sam is a natural substitution for David (Bercedo), they give you similar things in terms of the intensity, the quality in both goal scores,” Da Costa said. “I think Sam’s got some goals in him.”

It’ll come with time — McCann doesn’t have the on-field experience that Bercedo has accumulated — but Da Costa’s Bobcats stress a high-press offense that involves the striker working sideline-to-sideline, hounding defenders to force off-target passes. Having a reliable fill-in to give Bercedo a breather would be invaluable.

“There’s quite a few guys in that newcomer class that, I think, will surprise you,” Da Costa said with a smile.

With a focus on earning their first win away from Hamden, the Bobcats will travel to Fairfield on Sept. 8 to take on Sacred Heart.