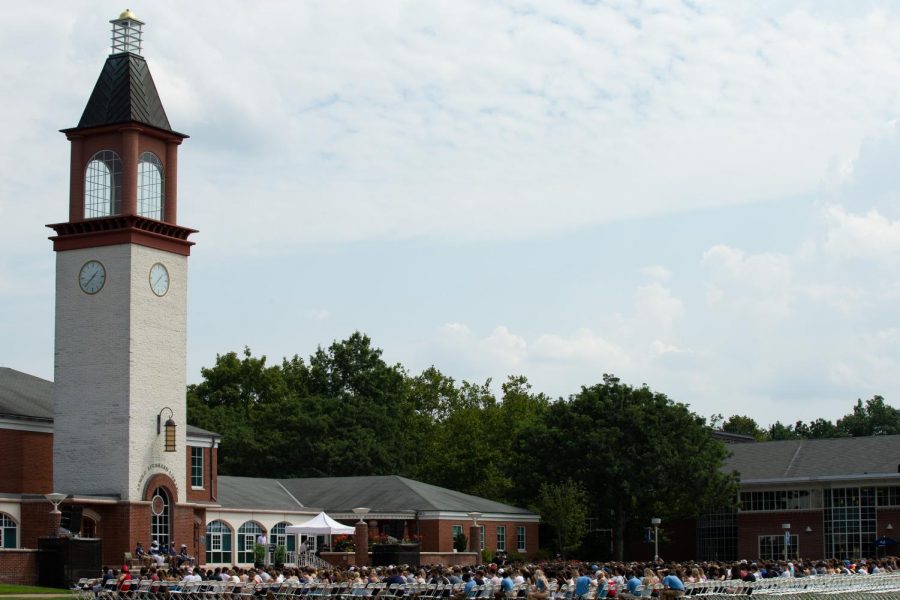 Quinnipiac University welcomes its class of 2025 to the Bobcat community at convocation on Aug. 27, 2021.

The university also put in place penalties for students who don’t comply with the vaccine mandate by fining them weekly and cutting their access to the campus network and Wi-Fi.

In terms of COVID-19 protocols this semester, Senior Medical Advisor Dr. David Hill said there will be weekly testing for students who were exempted from the vaccination mandate and students who are symptomatic.

Hill also said the university is prepared to take care of students who are ill with isolation and quarantine spaces. He is optimistic that the semester will not look like last fall when there was a surge of cases after the Halloween weekend.

Despite the mandatory vaccination, the university put in place an indoor mask mandate. Hill said masks are 95% effective to stop the virus from getting into one’s body.

Olian asked Hill if it was accurate that the COVID-19 vaccine is highly protective against hospitalization and death. Hill said “absolutely.”

There will be flu clinics on campus to offer everyone shots this fall. They did not mention COVID-19 vaccine clinics.

One difference from last year is the university’s visitor policies. Chief Public Safety Tony Reyes said guests can come on campus without being vaccinated, but everyone must wear a mask indoors. Similar to previous semesters, overnight visitors must register with the student affairs prior to staying.

A town hall participant asked about the university’s accommodation for faculty and students if they need to be out of class due to their sickness. Provost Debra Liebowitz said there will be a notification from the health services about any extensive absences. She said flexible accommodations are available for faculty who are sick but it’s a matter for department chairs and deans.
Budget and fundraising
Chief Financial Officer Mark Varholak said the budget this year is “tighter” due to the lower enrollment of students in the fall 2019 and 2021 semesters. The university did not reach its goals in terms of enrollment for the undergraduate program this year.

“For the most part, (we were) able to protect our units and divisions from having to move forward immediately based on some preliminary reads on enrollment and make budget cuts or budget adjustments,” Varholak said.

He explained that early financial planning will lead to a maximum opportunity to look at strategic initiatives that would generate revenues rather than making cuts to meet the budget goals.

“To the extent, we can mobilize and activate those, they can not only help with the (2022-23) budget, but they will set us up long term. With some great growth, which would be much needed for the future,” Varholak said.

Liebowitz added that the budgeting process this year was different from the past since there was a “financial future plan committee” that worked with faculty and deans.

“We didn’t go and do immediate cuts this year when it was clear that we hadn’t met the enrollment target,” Liebowitz said. “The leadership figured out other ways to deal with that in the short term, and so, the goal is to give us enough leeway starting right now.”

In terms of the fundraising effort, Olian said the university is able to raise 2.5 times more than the 10 prior years. She said every person on campus, whether it be deans or faculty members, has contributed to the fundraising.

“It’s never enough,” Olian said. “But (the) last three years have been our best, by far, philanthropic and fundraising years with every year, we’ve exceeded our goals.”

A participant asked the administration whether or not there will be raises for faculty and staff in the coming fiscal years as the cost of living continues to rise. Vaholak said there was no increase in the 2021-22 fiscal year. Due to the tight budget, the university was not able to build a cost of living into the pay.

“We made it a priority, as we finished out last year to award an appreciation bonus or award or whatever you want to call it,” Varholak said. “One of the first things I did was put in a placeholder, at least for some sort of cost of living adjustment to be considered as we kick off our planning.”

As The Chronicle reported, the average salary of the 10 highest-paid employees at Quinnipiac in 2019 (the most recent data available) was $595,676. Olian made $1 million. Varholak made $556,606. All top-paid employees except the former ones have seen an increase in their compensations from 2018-19.

In terms of students, Ellett said the incoming class of 2025 is smaller than last year’s. While the undergraduate enrollment goal was unmet, the university met the goals for the online and graduate programs.

In May, The Chronicle reported that every school faced an application downturn with a 20.4% decrease for the whole university. The acceptance rate reached 87.4%. The pre-pandemic rate was 73.97% in the fall 2019 semester.

There is already a plan in place to recruit more students next year, Ellett said. One of the strategies is to dedicate a shuttle for the admission team to facilitate campus tours from Mount Carmel to York Hill Campus. This will launch on Oct. 4.

Ellett said former Vice President for Enrollment Management Eric Sykes has left Quinnipiac. A new dean of admission will arrive during the first week of September.

“We all need to play a part as an enrollment ambassador for the institution,” Ellett said. “Let’s all think about those cousins, relatives, neighbors with 16- and 17- and 18-year-olds from far away or close by, let us know we’d love to send some information to them and get them in the pipeline to consider you a place for their continued educational aspirations.”

There will be more digital efforts to recruit new students and increase enrollments, said Vice President for Marketing and Communications Daryl Richard.

Besides student recruitment, the provost mentioned there will be faculty searches. While Liebowitz said it has been happening thoughtfully and judiciously, there is also a desire to grow strategically and to think much more about revenue.

“We’ve been very, very appreciative of the fact that we’ve been thoughtful in the budget even with constraints about how to navigate that balance,” Liebowitz said.

Diversification of the Board of Trustees
Olian said this is something that’s also a priority for the board itself.

“It is by no means anywhere near the diversity we seek,” Olian said. “I think everyone is conscious of that on the board, that is a fair question, (it) is a very important priority and it’s our commitment to make advances on that.”

There were talks between the administration and different departments on campus about the expansion of program offerings including degree and non-degree programs. With the rise of online learning, the university has also redefined its target demographics.

More accelerated programs at the graduate level are offered, not just for adult learners but also to help students hone their skills. Olian said Quinnipiac has been “very successful” in terms of outcomes relating to employment. Career recruitment agency Zippia ranked Quinnipiac No. 1 under the best college for getting a job in 2019-21.

For plans on investments, the president explained that there is a goal to double down and put emphasis on computing and engineering as well as initiatives for recruitment Ellett came up with. Hiring the university-owned or third-party recruiting staff to attract new students in different demographics and potentially internationally is also a part of that plan.

Olian mentioned investing in an esports lab, an entrepreneurship lab and artificial intelligence.

“With a permanently smaller student body, especially at the undergraduate level, we expect to expand our graduate level, we are right-sizing our budgets, we are right-sizing our resources,” Olian said.
Arts and culture
Executive Director of the Albert Schweitzer Institute Sean Duffy asked about the closure of Ireland’s Great Hunger Museum. Olian said it was “clearly a very difficult decision” for them. Due to low attendance and failure to raise funds over the last three years, Olian said the Board of Trustees voted unanimously to keep it closed.

“We are now in conversations with some very important museums in the country to make sure that the collection is visible in more urban environments where the narrative is continued and preserved so that this is not going away,” Olian said.

With regard to incorporating more arts and culture in student experience, Ellett mentioned that there were conversations about potential residence hall renovations to include music practice and theatrical activities rooms.

“We want to put arts in the core of what happens extracurricularly,” Ellett said. “You have an advocate, and if you have ideas for extracurricular, please let me know, (I) love to be participated. And I know my student affairs colleagues would as well.”
Mental health resources
Amid the ongoing pandemic and issues that have persisted around the globe, Vice President for Equity, Inclusion, and Leadership Development Don Sawyer asked the faculty and staff to prepare to be a community of care. Situations he mentioned included the crisis in Afghanistan, the earthquake in Haiti, the stress of the health care system and political and ideology division.

“Our humanity is a fragile thread that connects all of us, and so we’ve experienced a great deal in the past two years and, at times, it seems as if there’s no end in sight,” Sawyer said. “But, yet in the midst of this, you know I’ve been working with some students over the past two weeks, they also (come) into our community with a sense of hope.”

Sawyer said it’s important for faculty, staff and students to utilize the resources that are already in place for them. In addition, he said it’s also important to create safe spaces to check in on community members.

He also mentioned dorm renovations and digital renovations in the Center of Communications and Engineerings to make it more interactive for students and visitors.

The facility team is working with other schools to get similar renovations.

This summer, Quinnipiac spent around $4 million to renovate the Complex residence hall and build a three-bedroom apartment for Ellett. It also installed modular labs at the CAS parking lot and attempted to relocate six tennis courts to the North Lot.

Update 08/30/2021: The Chronicle incorrectly reported that the university did not meet its enrollment goal for the graduate program, but it did.