‘Thanks to you:’ Connecticut and federal leaders commend students for combating vaccine hesitancy 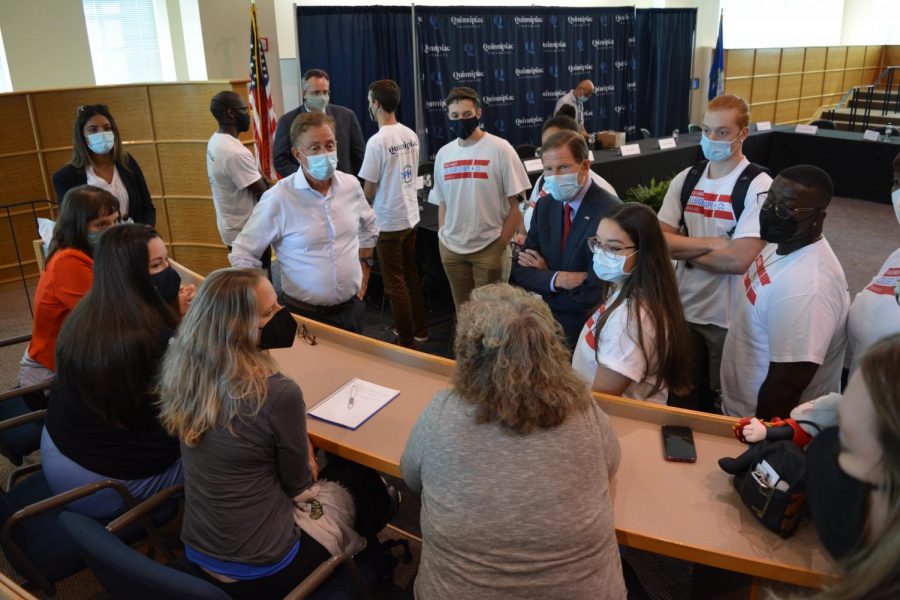 When a single mother could not find a time to get vaccinated because of her busy schedule, senior health science studies major Batool Naqvi stepped in to inform her of the flexibility of a New Haven vaccine clinic. The mother later got her COVID-19 shot.

“It’s really important to get to do this work there,” Naqvi said.

As the Connecticut Public Health College Corps program that Quinnipiac University hosted came to an end last week, corps members and government officials discussed on Tuesday the outcome the work had on the community. The panel took place in the Mount Carmel Auditorium at Quinnipiac.

The program provided hours of training and weeks of field work that included canvassing and helping out at different vaccine clinics across the state.

Senior health science studies major Gabriella Montenegro who worked in the Bridgeport area, said her overall experience in the program was great. She said she learned about how much work has to be done before changes can happen.

“One of my favorite moments was getting to be in an actual clinic after the week before canvassing, (seeing) people getting their vaccine first-hand and just knowing that my hard work and the rest of my community’s hard work paid off,” Montenegro said.

The main purpose of the program was to increase outreach and communication around the safety and the efficiency of COVID-19 vaccinations, said Janelle Chiasera, dean of the School of Health Sciences.

Democratic Sen. Chris Murphy of Connecticut said that there is still a lot of work to do as the country faces the spread of the delta variant and that 90% of the current hospitalizations are unvaccinated.

He emphasized that young people need to do their part by getting vaccinated.

Murphy said programs like this are important because a lot of people are scared of being looked down upon if they ask questions about the vaccines or mention misinformation they’ve heard from the internet.

He also mentioned that Quinnipiac’s vaccination rates “look really solid.” The Chronicle reached out to Associate Vice President for Public Relations John Morgan last week for the current vaccination numbers but he declined the request.

Despite the Food and Drug Administration’s (FDA) full approval of the Pfizer vaccine, Democratic Sen. Richard Blumenthal of Connecticut said he anticipated 99% of people have no idea what the FDA is. That’s why corps members’ work is important, he noted.

Associate professor of health and strategic communications Laura Willis, one of the four faculty mentors, said they taught corps members important skills needed to convince people to get the vaccine. They also discussed the medical side of the vaccine during training week as well.

Even though the vaccination rate rise in the past weeks couldn’t be solely credited to the program, Willis believed these students made a “meaningful” impact on individuals with whom they had conversations with.

“One of the main takeaway points from the training week was that don’t see a conversation as a failure if that person doesn’t immediately go get vaccinated,” Willis said. “Imagine every conversation as watering a flower and eventually with water and sunshine, the flower will bloom.”

Gov. Ned Lamont said he found early on that the internet and the online vaccine system alone could not bring people out, but real human interaction from young people can.

“You have to look people in the eyes,” Lamont said. “(Connecticut is) in relatively good shape. Our infection rates are sort of flat over the last two or three weeks, thanks to you. Hospitalization still creeps up a lagging indicator. Well, we still have some work to do. And I’d love your feedback on that.”