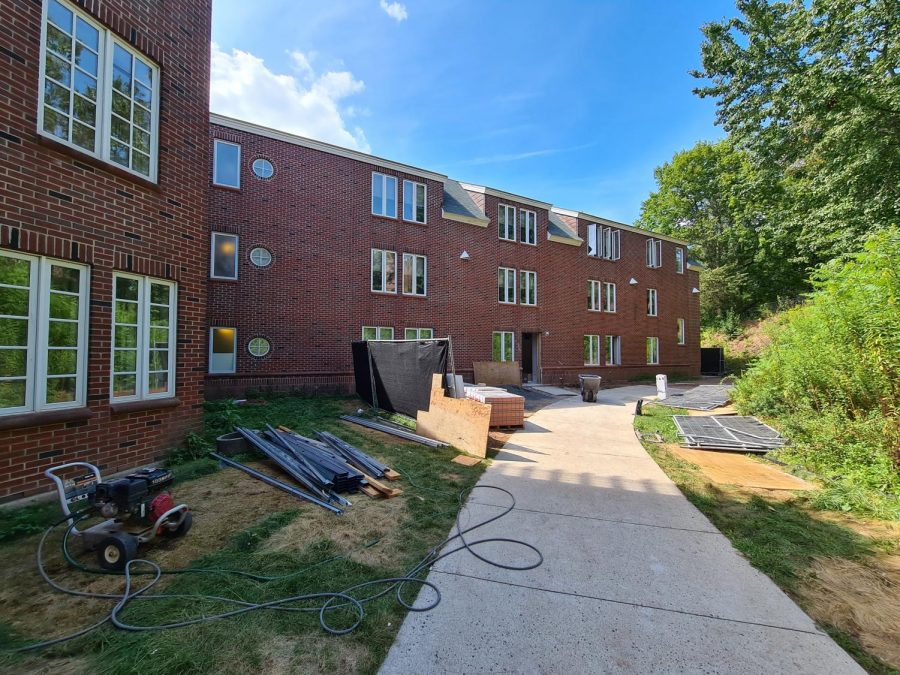 Quinnipiac University Chief Experience Officer Tom Ellett and his wife and a soon-to-be nursing faculty, Gladys Ellett, will move into a newly-constructed three-bedroom Commons apartment by the end of August with his 11-year-old dog, Roman.

The university spent around $4 million to renovate Complex (Founders, Bakke and Sahlin) and Commons residence halls this summer, Vice President for Facilities and Capital Planning Sal Filardi told The Chronicle. The price includes everything from construction to design and furnishing.

A part of the renovation project was the demolition of at least three Commons quads that normally house 12-20 students. The area will turn into an apartment for Ellett.

According to the site plan, the apartment features three bedrooms with a walk-in closet in the master bedroom, three bathrooms, a Commons community bathroom-sized kitchen/living/dining area, a laundry closet and a quad-sized social gathering space in front.

Ellett declined to comment on whether or not he will be paying rent or if the housing is a part of his employment benefits. According to the university, a Commons quad costs $11,960 per student for an entire academic year.

As someone who has lived in residence halls at New York University, Syracuse University, Catholic University of America and Utica College, Ellett said being on campus full time will allow him to help students bridge the gap between their academic and social lives.

“My job is not to be someone who’s handling student conduct or I’m not supervising RA’s (resident assistants),” Ellett said. “My job is really to be a place and a person that can be a resource for students.”

At previous institutions, Ellett said he hosted different events in his apartments. He wants to do that again at Quinnipiac. He said he wants to be able to have conversations with students about topics that go beyond academics.

“I’m looking forward to it, and I hope that Quinnipiac students see it as a positive thing,” Ellett said. “Because, I certainly do.”

Sophomore media studies major Juliette Lapointe said the idea of having Ellett and his family moving in seems “a little out of place.”

However, Ellett and his wife are not the only nonstudents who will be on campus as the university plans to have more faculty and staff living in residence halls in the future.

“I lived in Commons my first year, I think I would have found this a little uncomfortable to have faculty members living in our dorm,” Lapointe said.

She agreed that having an adult presence on campus is a good thing, but she said college students are expected to learn how to be more independent away from their families.

“It isn’t expected to have an adult faculty member living in a dorm,” Lapointe said. “All the residence halls have RA’s, and I personally think they did their job well last year in Commons.”

Ellett assured that he will not act as a parent, but he will be a “role model.” He claimed that students in his advisory board last year told him that they would like him to live around them.

“I think the more people get to know me, the more they see that I work tirelessly to make sure that students have a really good experience, no matter where I have worked in my career,” Ellett said.

Ephemia Nicolakis, a sophomore graphic and interactive design and public relations double major, was on Ellett’s advisory board last semester. She said Ellett is an “amazing” person and addition to the Quinnipiac community.

“Working with him on the advisory board has (shown) me how committed he is to the students and wants to really make a difference,” Nicolakis said. “I think it is great that he wants to move onto campus because it’ll give him an experience like the students so he can have a perspective of his own, firsthand.”

An advice Ellett had for students is to say hello, because he will be saying hello to them as well.

Besides Commons, the university also renovated the Complex residence halls. Filardi said the buildings were built in the early 1980s with tight space and not a whole lot of amenities.

The Complex now features two singles and a double in a suite instead of three doubles. All the pocket doors were taken out, which allows residents to use their QCards to access the building without having to carry a separate set of keys. All 30 suites now include a full kitchen with a full-sized refrigerator, a microwave and a stove.

Sophomore civil engineering major Mackenzie Guthrie will live in Bakke this fall. She said she is excited and nervous about the changes to the facilities.

“I think it will be really nice to be living in a dorm with new appliances and furniture, however, unlike other dorms, I’m rather unfamiliar with how the layout of the dorms are,” Guthrie said. “I have seen a few pictures, but don’t have a very good idea of what the individual room setups are.”

These dorms will house around 120 sophomores. According to the university, a single room in Complex costs $15,200 per year while a double room costs $12,760 per year.

Filardi said the university completed minor renovations, including furniture repairs and carpet replacement, in every residence hall every summer. But the major renovations happened in Commons and Complex.

In the future, Filardi explained that there will be more renovations in residence halls to free up more space by turning quads into doubles. In terms of apartments for faculty members, he said the university will figure that out along the way as its master plan progresses.