Second time’s the charm: James Gunn’s ‘The Suicide Squad’ is much better than its predecessor 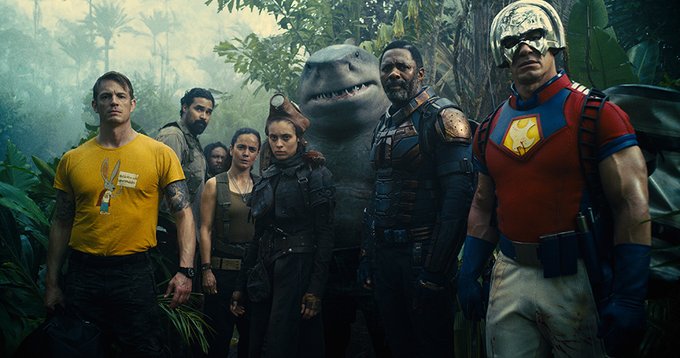 “The Suicide Squad” took to theaters on Aug. 6, and describing the movie only takes one word — “fun.” Celebrated director James Gunn made a film that was filled with laughs and characters that were easy to root for.

Unlike its predecessor, “Suicide Squad,” which set box offices on fire in 2016 but never lived up to the hype, Gunn’s remake didn’t take itself nearly as seriously as the original. The plot revolves around a gigantic extraterrestrial starfish, for goodness’ sake, whereas the original kept trying to create dramatic moments when there simply didn’t need to be. “The Suicide Squad” finds a good balance between comedy, drama and storytelling.

The squad is sent to Corto Maltese, a fictional island off the coast of South America, to shut down a program with cataclysmic potential, Project Starfish. The storyline does what it needs to do — it sets the pace. The movie is made by the visual effects and acting of the team as they travel from the jungle to the city and onto Jotunheim, home of the psychic starfish Starro. The villain’s introductory scenes to the Suicide Squad were properly creepy, as Starro can send out miniature starfishes that incapacitate and control people by latching onto people’s faces akin to the facehuggers from the “Alien” movies.

A team is only as good as its members, and it’s no different for the Suicide Squad. Idris Elba plays Bloodsport, who essentially replaces Will Smith’s character, Deadshot, from the original film. Both fit the role and played it well as the strong leader with some flashy toys. I did prefer Elba’s Bloodsport to Smith’s Deadshot, but that could be due to other factors beyond the acting.

Margot Robbie returned as Harley Quinn and was as lively as ever. Her quips fit her brash attitude as she continues to develop as a character in a post-Joker landscape. It helps to be, for a lack of a better word, a badass.

John Cena, who I was too quick to rule out as a meme, turned in a solid performance as Peacemaker with some hilarious lines that filled the theater with hushed giggles. His character defined “the ends justify the means,” which set up for some memorable moments with lasting impacts.

Joel Kinneman plays a respectable if simple Colonel Rick Flag. As the dutiful “good guy” of the group, Flag is exactly what you expect him to be.

David Dastmalchian is no stranger to playing eccentric characters in the DC universe after his role in “Gotham.” He plays the Polka-Dot Man, and yes, you read that right. Dastmalchian has his moments, such as his heated back-and-forth with Bloodsport and Quinn shortly after a gunfight. His powers to literally shoot corrosive polka dots were fun to see, if not too often. The Polka-Dot Man’s hatred for his mother, who forced these powers upon him, becomes a hysterical repeating gag throughout the movie — trust me, it’s funnier than it sounds.

Sylvester Stallone found himself in this movie, too. I genuinely didn’t know it was him until I saw the credits, but Stallone voices King Shark, a humanoid shark who does shark things. His combat skills were fun to watch, but his one-liners took the cake, hitting far more than they missed. When you think about it, you shouldn’t be surprised that Stallone can voice a humanoid shark to perfection.

Daniela Melchior, who played Ratcatcher 2, should receive praise for her performance. In many ways, she was the glue of the group who held the most important role. Ratcatcher 2 grew up as a homeless kid supported only by her drug-addicted father, the original Ratcatcher. Her father died in an overdose, but his love for his daughter never faltered and lived on in Ratcatcher 2.

Ending with Melchior’s character is key because of what she represents in the group. She is the one with the most light inside her, the one who sparked empathy in Bloodsport and stuck to her values throughout the film. She was grouped in with killers and psychopaths on excessive charges, and how she views the world is so different from her peers that it makes all the difference at crucial points in the movie.

“The Suicide Squad” was a massive win for a DC universe desperate for a hit. When compared to the Marvel universe DC has almost always fallen short. But this is a superhero, or supervillain, I should say, movie that everyone can enjoy. It restored life to the brand of both DC and the entertaining concept of Task Force X, affectionately known as the Suicide Squad.

Better yet, the sequel ideas can be endless. Gunn can stick with the cast, or shuffle it around. The plot can surface anywhere about anything as the Suicide Squad undertakes secret “save-the-world” type of missions. If a director or writer can think of something creative the Suicide Squad can be there to see it out.

Critics will point out the lackluster box office performance after only $26.5 million in sales, which was short of projections due to a rise in COVID-19 cases. However, it’s unfair to judge a movie on numbers so heavily influenced by an outside factor like COVID-19.

Gunn did a masterful job with the casting, but also with the way the movie was constructed. Without giving spoilers, characters are killed off. A lot. It often came unpredictably, and that is a powerful tool that Gunn delivered with precision. The opening scene is a memorable one that sets the tone for the rest of the movie, and it’s such a fun one as well. It did leave me with just one complaint, however.

How can you give Pete Davidson such little screen time?

Putting my appreciation for Davidson aside, “The Suicide Squad” deserves to be seen by people who give it a chance beyond the tainted feelings of disappointment the original left behind. It’s a great movie to watch with friends in theaters or in the comfort of your home on HBO Max. It won’t leave you thinking that it was a cinematic masterpiece for the ages, but you will leave happy, laughing and satisfied. What more can you ask for?