International students on COVID-19 situations at home: Vaccine accessibility in the US is a ‘privilege’ 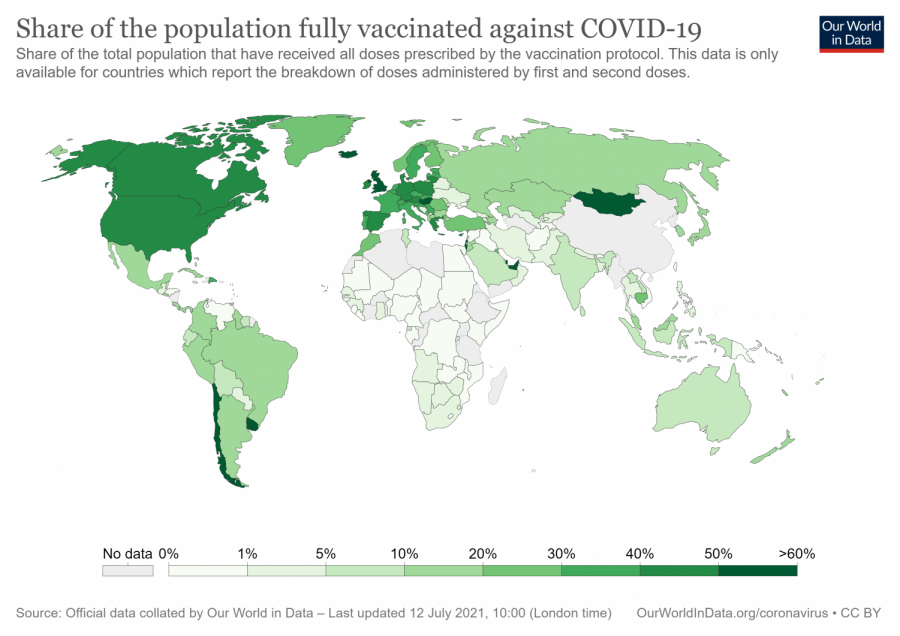 Our World in Data

As the COVID-19 vaccination rate reached 61.7% in Connecticut and 48.4% nationwide, only 12.1% of the world’s population have been fully vaccinated. Over 50 countries have not yet reached a rate of 10%. All data on vaccination rates throughout the article was from Our World in Data.

“I would say that it is a privilege to be able to get the vaccine as freely and accessible as it is in the United States,” said Genesis Iscoa, a junior political science major. “They’re basically pushing it to you, you know, giving it to you, which is very different from the rest of most of the world.”

Even though Iscoa of Tegucigalpa, Honduras, already got her two doses earlier this year in the U.S., the pandemic situation at home is another story — it has not gotten better.

“It’s pretty bad, everything is basically closed, but people are still going out, of course,” Iscoa said. “(The government) keeps telling the people that they’re buying mobile hospitals or vaccines. They never appear. I wonder why.”

According to Reuters, infections in Honduras have been increasing in the past three weeks with an average of 945 new cases a day. Out of 100,000 people, 67 were reported with the disease.

Iscoa said although there are preventative measures and business restrictions, people could not follow them as they need to choose between risking their lives getting COVID-19, or abiding by the restrictions and suffering from the lack of income.

“It’s more like ‘where do you go,’” Iscoa said. “A lot of the businesses are closing because if you open, you are getting your risk of being infected. (But) if you restrict all these, the people are already dying. You close the shops, you basically let them die of hunger or anything else.”

The World Bank reported in May that the Honduran population that lived under the poverty line ($5.50 daily income) in 2020 could be as high as 55.4%.

“I feel very grateful (to be able to get the vaccines) because I’ve been seeing everybody my age here, my friends from high school here, they can’t go out,” Iscoa said. “Because, you know, nobody’s vaccinated.”

As of July 12, Honduras has only 0.7% fully-vaccinated population. Iscoa said the government is prioritizing health care and frontline workers, but she said the allocation was poorly planned.

“They started just giving out first doses, without making sure that they had enough for the second,” Iscoa said. “So what has happened with a lot of people, including my mom, is that their second dose has been postponed for way too long when the second dose is not going to be as efficient or effective, or they haven’t given that at all.”

She said her family suspected that her mom, a doctor, was given “water” instead of the vaccine since she took an antibody test but her immunity level against the virus has not gone up much.

Fake vaccines are not unheard of. CNN reported that thousands of people in India were injected with salt water instead of COVID-19 vaccine. Despite being a hub for vaccine production, India’s COVID-19 vaccination rate is at only 5.3%.

“We just faced our second wave (of COVID-19),” Agnish said. “Things aren’t good here, from the health system collapsing to the economy of the country being at its worst.”

Agnish was among the 5.3% who have been vaccinated with Indian-made Covishield as her parents are health care workers. However, she said the vaccine demand is greater than the supply.

Reuters reported that new COVID-19 cases in India are decreasing after the country faced its second wave between April and May. There were 21 infections per 100,000 people reported in the last seven days.

“My parents are both health care workers, so it’s been tough (not) seeing them as much,” Agnish said. “We have lost someone very close to our family because of post-COVID complications too.”

The status of her home country prevented Agnish from being on campus in the last academic year. She said she missed out on the college experience.

In the continent with the lowest vaccination rate, Africa, people are experiencing vaccine shortages and vaccine hesitancy.

Sophomore biomedical science major Yamna Siddiqui of Niamey, Niger said the infection rate at home is not bad because people strictly follow government-imposed protocols. She said she has never seen anyone not wear a mask in public.

“I would say it’s because of patriotism,” Siddiqui said. “They’re so patriotic. They do listen to the government.”

Reuters reported that Niger only finds six new cases on average each day.

However, when it comes to vaccination rate, only 0.3% of Nigeriens are fully-vaccinated. Siddiqui said the number is not as concerning for her when comparing to the rates in other countries because she said there are preventative measures that put the spread of the virus under control.

She said one of the factors that contributed to the low vaccination rate among Nigeriens was vaccine hesitancy. According to local news, Niger uses Chinese Sinopharm and European AstraZeneca, and the locals do not trust them.

“The biggest concern story I hear is that because Niger used to be a French colony, they’re a little concerned that there is some sort of chip or something (in the vaccine) that’s going to transfer information (and) is going to be recorded by the Europeans,” Siddiqui said. “That’s one example.”

Siddiqui was able to get the vaccination in the U.S. and she said she felt “wonderful and safer.” However, she noted that the pandemic is not over, and people should still take precautions.

“It slightly provides also a bit more of optimism and hope that you’re gradually moving towards that step of pre-pandemic,” Siddiqui. “Again, we haven’t achieved that milestone yet, hopefully we will soon, but it’s some sort of optimism that once upon a time there are some improvements.”

Regarding the vaccine hesitancy at home, she said the important thing is to raise awareness of the vaccine’s benefits.

Senior computer information system and accounting double major Shumirai Mbwera of Harare, Zimbabwe said the pandemic is still affecting people in her country as most restrictions are still in place, which hurt business owners and students who cannot learn much through hybrid settings.

In recent weeks, Zimbabwe reported record-breaking numbers of new COVID-19 cases since January with 90 infections per 100,000 people reported in the last 7 days, according to Reuters. However, Mbwera said vaccine allocation had begun slowly in the country.

“I heard they’re getting the vaccines that were made from China because that’s the one that’s easier and accessible to them,” Mbwera said. “My grandmother got vaccinated. (The process) is kind of like how they’re doing in the U.S. but on a (lower scale).”

The vaccination rate there is at 4%. Available COVID-19 vaccines include Sinopharm, Sinovac, Sputnik V and Covaxin. Voice of America reported in May that Zimbabwe faced a vaccine shortage, which forced hospitals to turn people away.

Even though Mbwera resided in New York, she is hesitant to get the vaccine amid her fear of side effects. She said she will get it at some point as Quinnipiac is requiring it in order for students to come back in the fall.

According to the university’s announcement, international students can get any vaccine that was approved by the World Health Organization.

When it comes to beating a pandemic, Siddiqui said vaccination is an important topic internationally because she said it is “all mankind’s effort.”